What do four completely different games by four indie developers have in common?  Multiplayer and a Kickstarter campaign to unite them as an anthology under a single title, that’s what.  Sportsfriends collects Johann Sebastian Joust, BaraBariBall, Hokra, and Pole Riders into a single unit, and each game is designed to be as social as possible.  No single-player, no online components, just you and a group of friends having a blast in front of the TV.  We had a chance to ask the developers a few questions about their games, and they were more than willing to go into courageous detail about all aspects of their games.

[Hardcore Gamer] Four games from four developers under one banner — how did you decide to work together to put such a wide variety of styles in one game?

[Ramiro Corbetta] We were each working on our own games separately, but as we kept working on them we were definitely influenced by each other.  The idea for putting them together actually came from Doug.  After playing a lot of Hokra, he wanted to come up with a way to release these minimalist local multiplayer games that were starting to pop up all over the indie world.  Sportsfriends is our way of putting these games that we really care about in people’s hands.

[RC] It’s always hard to coordinate when there are four other people involved.  On the other hand, working with Doug, Noah, and Bennett has been incredibly easy.  We all have very similar goals, and even when we disagree, we can come to an understanding pretty fast.  It has been seriously much easier than I expected.

[HG] Why do you think local multiplayer has become sidelined in gaming?

[RC] The ease of online multiplayer got in the way.  I definitely appreciate online multiplayer – I get to play games with my good friend from college who no longer lives in New York, and I’m in FIFA league with people from all over the world.  But in some ways it got so easy that people don’t get together to play games as much as they used to.  And that’s sad.   Part of the issue here is probably also that more and more people move from city to city, so their friend base becomes dispersed.  While it’s great to be able to play games with your old friends, with Sportsfriends we are trying to create something that makes people come together in the same space.  Maybe you will even make some new friends just so you can play our games. 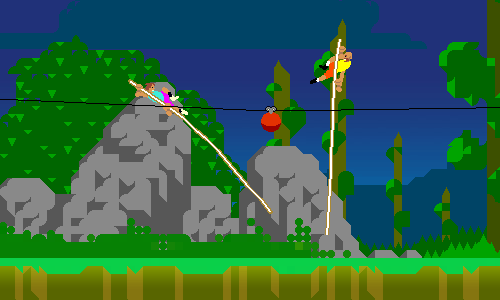 [HG] Hokra is incredibly minimalist, to the point I’d almost expect it to be on a cartridge for the (very) old Milton Bradley Microvision. What brought about its super-stripped down approach?

[RC] From a game design perspective, I have always been a minimalist.  I am very conservative about adding more elements to my games.  When I was making Hokra, I wanted to find the depth of all the sports games I love without the barrier to entry that they posses.  That’s probably what makes people think of old school games.  Graphically, it was more of an attempt to not do things wrong.  I am not a graphic designer by training, and I feel like the biggest mistake that people who are not outstanding graphic designers make is to try to do too much.  The graphic design is not a as much about retro nostalgia as it is about trying to keep a clean, minimal look.

[HG] Johann Sebastian Joust has been being demoed at various conventions for a while now. How has it evolved (and is it evolving) over its long road to an official release?

I’ve experimented with a number of “modes” and rules – some of which I haven’t even shown in public yet! My favorite addition is an “invincibility” mode where you can press your trigger button for a few seconds of invincibility. Your controller goes white to signal you’re invincible, and the brightness of the light shows how much invincibility power you have left. This mode is nice because it makes the game even more tactical – it becomes about wearing out your opponent’s invincibility meter, and striking/defending at the right times.

For the official release, I’m going to add a whole variety of rule tweaks and options. I want to make the game very customizable, such that each household and group of friends can find their own preferred combination of settings – their own “house rules.”

[HG] BaraBariBall has a heavy India theme going on in character design and the preview video music, and a quick Google search says barabari means something similar to rivalry or competitiveness. Can you tell us where this influence came from and how else it might show up in the game?

[Noah Sasso] Barabari means conflict, but individually bara and barbican also be the feminine and masculine form of the word “big”.  So, BaraBariBall can either refer to violent sport, or “big big ball”. The title was based on the former meaning, but I’ve come to prefer the latter, since it is a really big ball.

I’ve always been really interested in Indian music, so for the sound effects in the BBB I recorded a friend of mine playing tabla, which is a pair of pitched drums used in Indian classical music. I started working on the game after visiting another friend who had been teaching violin in southern India, so the visual style of the game was probably inspired by that trip. That experience was pretty incredible, sensory overload in every way possible.

BaraBariBall isn’t actually set in any real world location though and I think the characters and the combat in the game owe much more to Chinese martial arts!

[HG] If the Kickstarter goes well, are there any plans to see about inviting/drafting any other, similar games into the collection?

[NS]: We’ll have our hands full with the initial four games for the immediate future. We want to make sure each one is as solid and as polished as possible, so we anticipate a great deal of playtesting and attention to detail. These games have to be rock solid – for many games, you can forgive a crash or some weird bugs, but when you’re playing a heated match of Hokra and money is on the line, the last thing you want to worry about is the game freezing up or glitching out.

[HG] Most of these games have been shown at various shows and conventions for a while now, usually garnering some pretty good press along the way. How has that helped in tweaking and development?

[NS]: Strictly from a development point of view, opportunities like these are great stress tests. It would be fooling to try to develop a multiplayer game without subjecting it to hours and hours of random strangers banging on it. I’ve shown BaraBariBall at what must be several dozen events by now and it’s in good shape, but there was a long period of babysitting it, constantly saving replay footage, tracking down obscure bugs that only occur after several hours of play, or during very particular situations.

But as important as stability is, it’s ultimately engineering – watching people play is just as crucial for actually tuning and balancing the game, or making sure it’s readable and makes sense for spectators. And, of course, before you can get any real substantial playtesting done, you need to have a game that people are at least a little interested in sinking their teeth into.

[HG] One theme all four games have in common (aside from the obvious multiplayer) is a lo-fi approach to graphics. Coincidence, or more about making the game about the players instead of the screen?

[NS]: I don’t think this is a coincidence at all. It’s true that we’re all focused on the fundamentals of the player’s experience –the player’s controls, legibility of the game state and rules, fairness and depth – and, since we’re largely solo developers, we have pretty limited resources.

At the same time, I do recognize how the spectacle of a game like UMVC3 or the Mortal Kombat series can be a large part of the appeal, but I think we can be as mechanically interesting and as exciting without as much flair. I think Street Fighter 4 is an incredible achievement in a lot of ways but even in that case, I still roll my eyes every time an Ultra move comes out and wastes 5-10 seconds of my time with the same dumb animation.

[HG] Everyone at Hardcore Gamer agrees totally about the Ultra system… but that’s for another day. Thanks for your time!

If Sportsfriends sounds cool to you, and it should, please take time to check out the Kickstarter for Sportsfriends, and keep coming back here to HardcoreGamer.com for any new information regarding the game!