Welcome to “Raising ‘Cade”, a retrospective feature about the original gaming arena: the arcade. Every week, we’re setting out around the darkest corners of America in search of a different game to play. The goal? Chronicle every arcade game in existence. In part 4 of our 15,435 part series, we’re grasping bananas firmly and playing with monkeys.

Oh, to be a fly on the wall where this one was pitched: “So the idea is that a player controls a monkey in a ball and rolls around and collects bananas”. It really is a ridiculous concept when you think about it (or don’t), but then again, aren’t all of our favorite video games icons equally as ridiculous? A blue hedgehog that runs around collecting rings? An Italian plumber jumping on monsters to save a princess? It’s no wonder that this medium wasn’t taken seriously until video games started to involve dudes in military gear shooting up other dudes in military gear. Believe it or not, Super Monkey Ball proved to be one of the GameCube’s most successful launch titles back in 2001. A little known fact, however, is that that game was not the series debut — that came seven months earlier with “Monkey Ball” in arcades.

There she is in all of her glory. Arcade cabinets are chicks, right?

Unlike other arcade variations of console games (or console variations of arcade games), Monkey Ball is largely the same as the home console versions it led to. In fact, both games features the same exact stages and difficulty levels — the only difference being the exclusion of party and mini games the home versions include. One caveat of the arcade version is that only two lives are given and if any remain when a difficulty is cleared, the game still ends. It’s very frustrating to complete Beginner by gathering every banana and not falling off course once only to have to plop some more quarters in to continue. Of course, those good enough to be able to do that probably have no business playing it anyway. Unless you’re at Dave and Busters trying to impress your date with how awesome at rolling monkey balls you are. …Damn it. Of course, as the game goes on it becomes quite challenging; not nearly as much as the series has gotten recently with Super Monkey Ball: Banana Splitz, but difficult nonetheless. Getting to stage 25 on expert may have you wasting all of your money trying to beat it — and that’s money that could be better spent on booze at Dave and Busters to get your date to forget that you just spent half an hour trying to beat Monkey Ball. 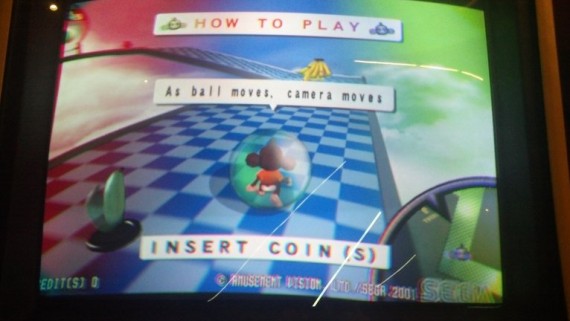 No, it’s not my camera; the screen really is in that bad of shape. Remember when arcade techs existed?

As the Gamecube, Xbox, PS2 and N-Gage (that’s right, I included it) versions are practically the same, the only cachet the arcade version has is the banana controller. Yes, that’s right, Monkey Ball is controlled with a banana. While that may seem like both the worst and best idea ever, it actually controls really well. Something about the shape of the banana in your hand while steering a monkey feels right. I, for one, would like to see other games adapted to the banana format. Making Lee search every single cabinet in a house looking for a little girl? Perfect fit for a banana. Blasting away terrorists in Black Ops II holding a banana in your hand? It’d finally make me go to a CoD dudebro party. 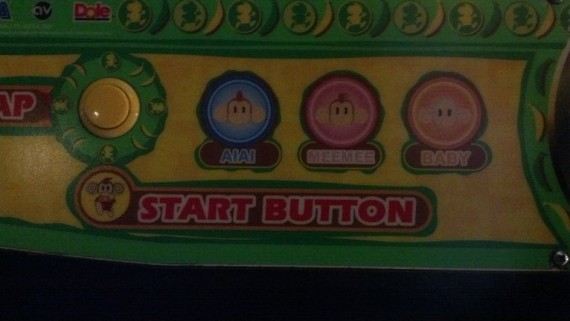 The only button you’ll ever find in a Monkey Ball game.

One cool thing about playing Monkey Ball now is too see Dole-branded bananas littering the levels. At some point, the licensing agreement between the two expired leading to generic ‘naners to appear in most of the later gamers. For some reason, there’s something about all that early-aught product placement in Sega games that make them seem ahead of their time. Or maybe I just like driving people to KFC, I don’t know. 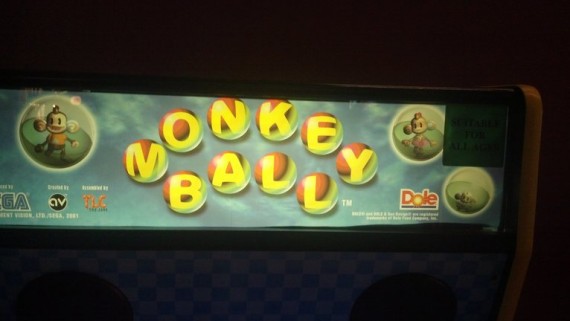 In case you were curious, Monkey Ball has a “Suitable for All Ages” rating. They’ll let kids kill monkeys, but not sub-zeros. Where’s the justice?

While most arcade games over ten years old, but under twenty, have begun to or have already aged poorly, Monkey Ball will always be a great game. Using nothing but a banana to guide tilt a monkey ball through levels without falling off the side is gaming at its most pure. It doesn’t require any buttons or much of a learning curve, yet is one of the more challenging 3D puzzle games ever made. The arcade cabs are rare now and while players of the Gamecube version have already experienced what the game has to offer, seek one out if only to say you’ve played a game with a banana. After all, you haven’t really lived until you’ve played a game with a piece of fruit.