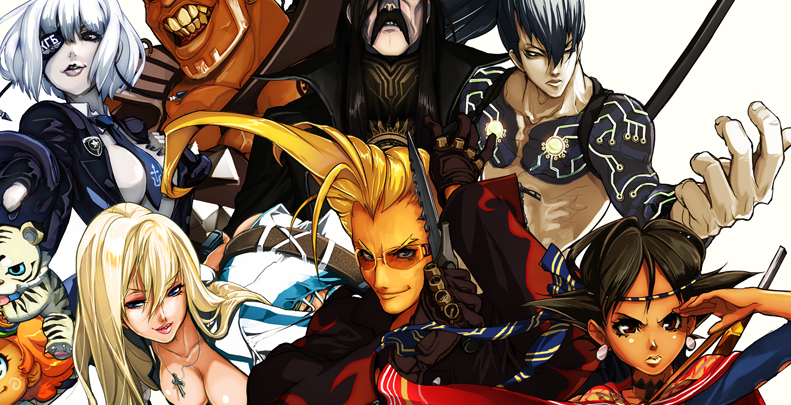 “Identity crisis” (noun): distress and disorientation resulting from conflicting pressures and uncertainty about one’s self and one’s role in society. This is the best term to sum up everything that is Fuel Overdose. From its presentation to actual gameplay, developer I-Friqiya is all over the map with their digital download title for PS3 and PC. This is a shame, however, because Fuel Overdose has some extremely fascinating ideas that just never manage to come together and deliver a coherent experience that goes beyond average. Had the kinks been ironed out, and the concepts better thought out, Fuel Overdose may have been something special, but they didn’t, and it isn’t. Here’s why.

Fuel Overdose is billed as a combat-racer with tactical elements, and can be thought of as a sort of Street Fighter meets Twisted Metal meets Mario Kart — if Mario took steroids, had a hunger for bloodlust and used machine guns and grenades instead of Koopa shells and banana peels. In actuality, comparing Mario’s infamous kart racer and Overdose is unfair. Meaning to say, Fuel looks a lot like something you’ve played before, but it’s not for a myriad of reasons. Let’s take a look at what will feel familiar first.

For starters, you’ll start off by choosing your mode of play, which is broken down into free race, challenge, championship, multiplayer and story. All but the last are pretty standard affairs, but the story mode is rather unique and is probably where you’ll spend most of your time. Once you decide which to play, though, you’ll then be tasked with choosing your driver, which is as integral to your success as it is in a fighting game. A handful of drivers are provided to choose from, each of which possesses their own set of moves and skills, giving the sense that strategy and play style are equally as important. Each character has super, ultra and skill attacks (this is where the Street Fighter inspiration comes into play), that are unique to them and can be used at any time during the race. Deciding which of these skills suits you is part of the “tactical” side I-Friqiya is talking about.

From there, you pick your car, which comes with its own set of pros and cons, too. After choosing a character and vehicle, it’s onto the actual racing — this is where things get a bit ugly. Up first, the game throws about ninety control options at you, and ninety different attacks and actions you can perform during the race. Foremost, we have all the weapons your car has equipped. This consists of a machine gun, missiles, mines, and a grappling hook. Weapons are cycled through with the press of a button and fired with another. Of course, the grappling hook plays a vital role in the game, as it allows you to latch onto cars and slingshot past them, or affix to an environmental object to allow you to take hairpin turns with ease. Keep in mind you’ll have a button mapped to that attack, in addition to having a button for accelerating.

If that doesn’t make matters a smidge complicated, you’ll also be able to detonate bombs that are placed at various points on the race track in order to blow up a competitor’s car when they are close to the detonation device. That, too, gets a spot on your controller. To top it off, in order to perform your special, ultra, or skill attacks you have to input joystick commands with the right analog stick like you would in a fighting game, complete with stick rolls and directional maneuvers. Did I mention you have to do all of this while driving?  The sheer amount of controls you have to learn, and how many buttons you may have to hold down and navigate at one time, while also trying to steer your car to avoid the many hazards or poor track designs, turns Fuel Overdose into Fuel Overload.

Unfortunately, this is all compounded by some shoddy mechanics, camera issues and generally poor track design. For being a game that requires quick reflexes and reaction time, it sure doesn’t seem to care much about responsive controls. There were times when I’d wreck, then jam on the accelerate button to get back into the race, only to not go anywhere. I’d have to pump the R1 trigger a few times before the game would register that I wanted to start moving my vehicle again. When your game is primarily a racing title, the one and only thing you have to get right no matter what is the assurance that people can, you know, race their car. When that doesn’t happen, you know you’re in for a miserable time.

This is made worse by the manner in which the camera is oriented. Fuel Overdose makes use of a top-down camera angle, which is inherently flawed seeing as it’s sort of important in a racing game to know what the track has in store for you just up the road. Since the camera is pretty tight on the cars, you never really know what’s lying in wait up ahead. You do learn to adapt to this issue, but it is a headache regardless. That’s only half of the problem. The other portion is how the camera doesn’t remain fixed. No, it will shift and move as you’re trying to take turns. As it does this, the control orientation changes, meaning that, if you were about to press left on the analog stick to take a left turn, but the camera suddenly changes on you, you’ll have to predict the camera’s movement and change the direction of the analog stick to coincide with wherever the camera is going to point. It’s a nightmare, and turns into an act of trying to predict the game’s mind, which pulls you out of the experience entirely.

It doesn’t help that you’re constantly being blown up, spun out, rammed and just generally harassed by the AI, on top of fighting the controls and inputting special attack commands. Oh, and there are wonky physics that will send your car driving in the wrong direction whenever you get into a paint-rubbing match with another car. This is such a problem, that the developers have recognized it by including an option that basically respawns your car facing the correct direction, so you can get back on-course without struggle. Did I mention there are frame rate hiccups as well?

But enough about the game design, let’s talk about the presentation. You may notice right away that the game sews together a patchwork of various styles to create one, singular design that makes very little sense. The characters are super anime, and even have rather outlandish, anime-inspired stories. This wouldn’t be a problem, if it weren’t for the fact that they’re put up against a very serious, contemporary backdrop that seemingly tries to depict post-apocalyptic vistas through clean, realistically drawn art. This makes the still-framed story segments feel disjointed. At least the character designs are unique, and their accompanying stories are fairly interesting to boot, so if you can sit through all the puzzling aesthetic choices, there’s a decent narrative to enjoy per character.

To be rather blunt, Fuel Overdose is not a very good combat-racing game. In fact, it’s so mediocre it hurts, despite it’s very unconventional approach to the genre. There’s a good deal of content included, but it must be endured to be seen, which can be a painful experience. Having said that, there are some saving graces such as the graphics, production values and excitement of neck-and-neck races when everything is working well and in unison. The core issue here is the fact that the game merely wants to do and be so many things all at once, but like a jack-of-all-trades, it’s truly a master of nothing. At points, it wishes to be just an action-packed racer. Other times it wants to be a fighting game on-wheels, while occasionally, it tries to be a visual novel in the story mode. Simply put, Fuel Overdose can’t figure out what it wants to be, and that’s a shame.