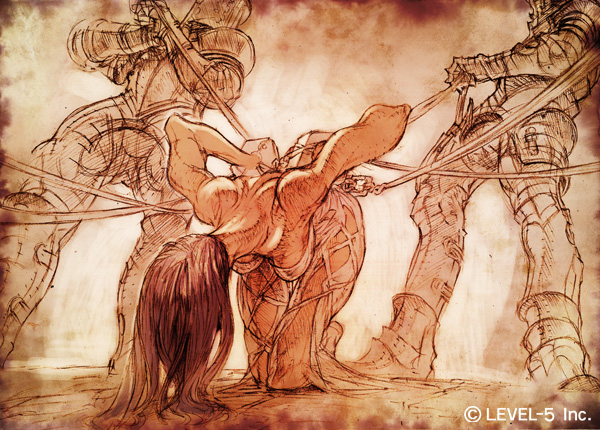 The third part of the Guild 01 compilation has finally come to the 3DS eShop. So far, its piece-meal approach has allowed players to partake in an excellent on-rails shooter with some of the best graphics on the system in Liberation Maiden and Aero Porter, which offered up a very unique luggage sorting puzzle game with iffy execution in places. Now, the creator of Ogre Battle has brought an homage to tabletop RPGs to the 3DS with Crimson Shroud.

Since something like that hasn’t really been done before, it’s easy to wonder just how well such a concept can be translated to a video game. In some ways, the transition is a smooth one. The use of dice still involves being active as you can move them using the stylus (or just hit A if you’re feeling lazy), while the text-heavy narration and descriptions fit what would be set if rules were being said aloud. Trying to read paragraph after paragraph of text on the regular 3DS’s small screen, however, can be troublesome. It’s hard to recommend this on anything but the 3DS XL for that reason since eyes can easily become strained trying to read the walls of text. The pacing of the game can be fairly glacial as well since text can only be skipped during backtracking — a common occurrence that also causes things to slow to a crawl. 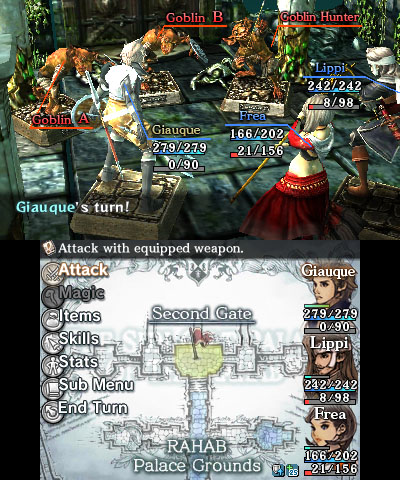 The core tabletop RPG setup works fairly well, though. Using the stylus to throw the variety of dice feels like the best way to replicate that act on the system and having dice throws alter conversation paths at times is a nice touch. The use of little metallic characters on bases to represent them is a perfect way to blend the JRPG gameplay style with tabletop RPG trappings and make the game a bit more accessible. If you’re fearing it due to not playing a tabletop RPG, you’ll be glad to know that the learning curve isn’t all that high as long as you’re used to turn-based JRPGs.

Like those, in Crimson Shroud, you’ll have a group (here, it’s always three) with a variety of skill sets and the last team to survive wins. Unlike a JRPG, leveling up or going to stores isn’t necessary — everything is obtained after combat and can’t all be kept since there’s a set amount of points to spend on items left by enemies. Characters skills can be increased, so it isn’t like you’re always stuck with boring, stock characters, but there is an adjustment to be made given how shops have been a standard thing in all kinds of console RPGs for decades. 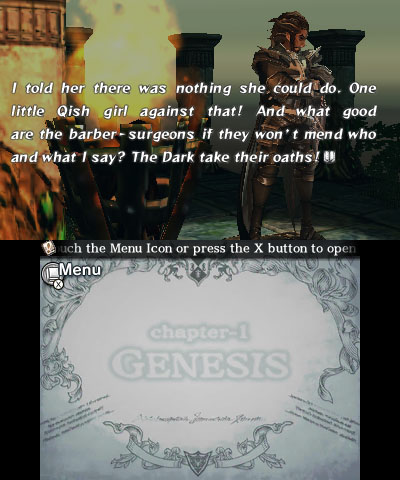 Similarly, it takes some time to grow accustomed to battles without much in the way of animation. Since the 32-bit era, we’ve all come to expect elaborate spell and attack animations, but you won’t find that here. Instead, attacks involve a character leaning slightly forward, and you using a combination of your imagination and the on-screen text to describe injuries to fill in the blanks. It’s definitely different, but I love the use of text to graphically describe things like deep tissue damage and clothes becoming slowly stained with blood – it adds a sense of gravity to what’s going on. The aesthetic of using the little metal figurines works really well and sets CS apart from anything else on another system. The environments look okay overall. You can tell what everything is supposed to be, but textures are really muddy. This problem affects the characters as well, but not as severely – the characters themselves look nicely detailed, but their bases look terrible. There’s clearly supposed to be text on them, but you can’t read it because of how smeared it appears. It’s not a huge issue, just something that takes you out of the game until you get used to it.

Other than the lack of voice-over for the large text areas, the sound design is absolutely incredible. The soundtrack is full of classical fare but its varying intensity helps the battles really come alive. The sound effects are even better – an early scene with flames crackling in the background suck you into things instantly, and later scenes outdoors involve birds chirping that sound so realistic, you may actually start looking outside your windows to see if there are any nearby. The atmospheric sound effects do a lot of good here and make the unbelievable world of metallic figures going around what appear to be real-world fantasy environments seem far more realistic in execution than it seems in theory. The audio is easily the best part of Crimson Shroud, and I hope its soundtrack becomes available soon because there are a lot of great battle tunes to listen to. 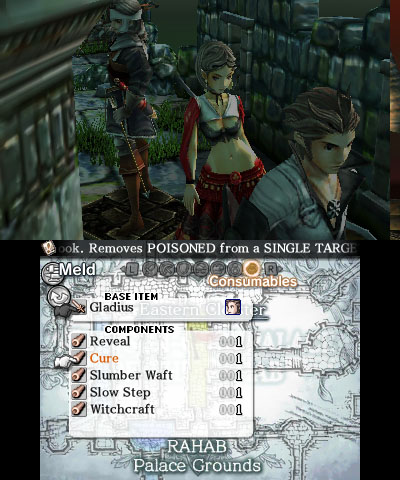 Crimson Shroud is an easy game to recommend for those into Dungeons and Dragons or with an affinity towards JRPGs. If you like the latter more than the former, I think it’s worth a shot just to see if an RPG game that requires some imagination on the player’s part is for you — it could be seen as a D&D gateway game in that sense. $8 is a bit steep for an eShop game, but there’s a lot of content here, and experiencing the incredible sound design of it may be worth the admission price alone.