As the year is coming to a close and the Wii U launch titles have had just about every word possible written about them, we’ve decided to turn to this year’s other console launch: the Neo Geo X. We’ve been playing (alright, obsessing over) every Neo Geo X launch/pack-in title the past week and Bradly and Steve have teamed up to share with you their thoughts about all 21 games below. After all, you wouldn’t accidentally want to stumble on Mutation Nation thinking it’s a good game, would you? 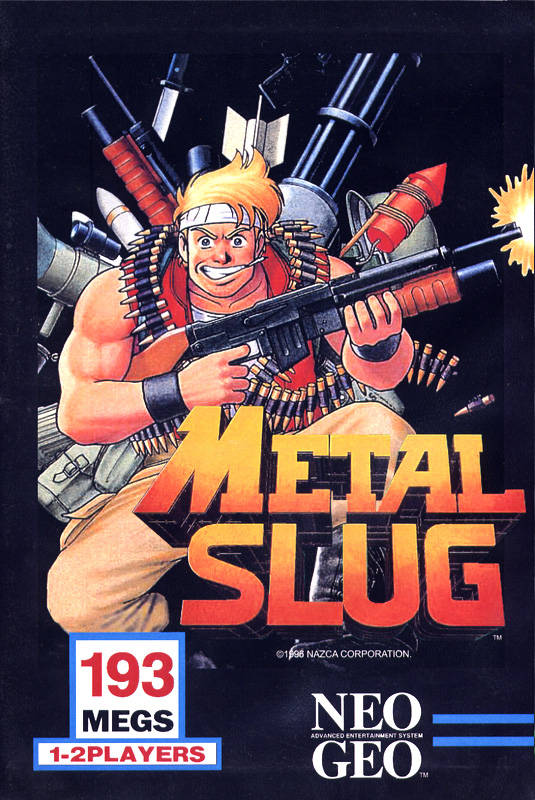 Metal Slug is still one of the best run ‘n’ gun side scrollers ever conceived and a highlight of the non-fighting titles. Coming later in the Neo Geo’s lifespan, the game featured some of the better graphics for the console with impressive hand drawn animation and environments bursting with color. The concept is simple: soldiers rush at you from either side of the screen and they must be eliminated as quickly as possible. To assist with this are grenades and multiple firearms ranging from flamethrowers to rocket launchers and, of course, the titular Metal Slug tank. With a sense of humor and fluid movement, it’s a joy to play and the sort of game you could pop a quarter into to waste a few minutes or an intense 40 minutes of nonstop action.
Play it 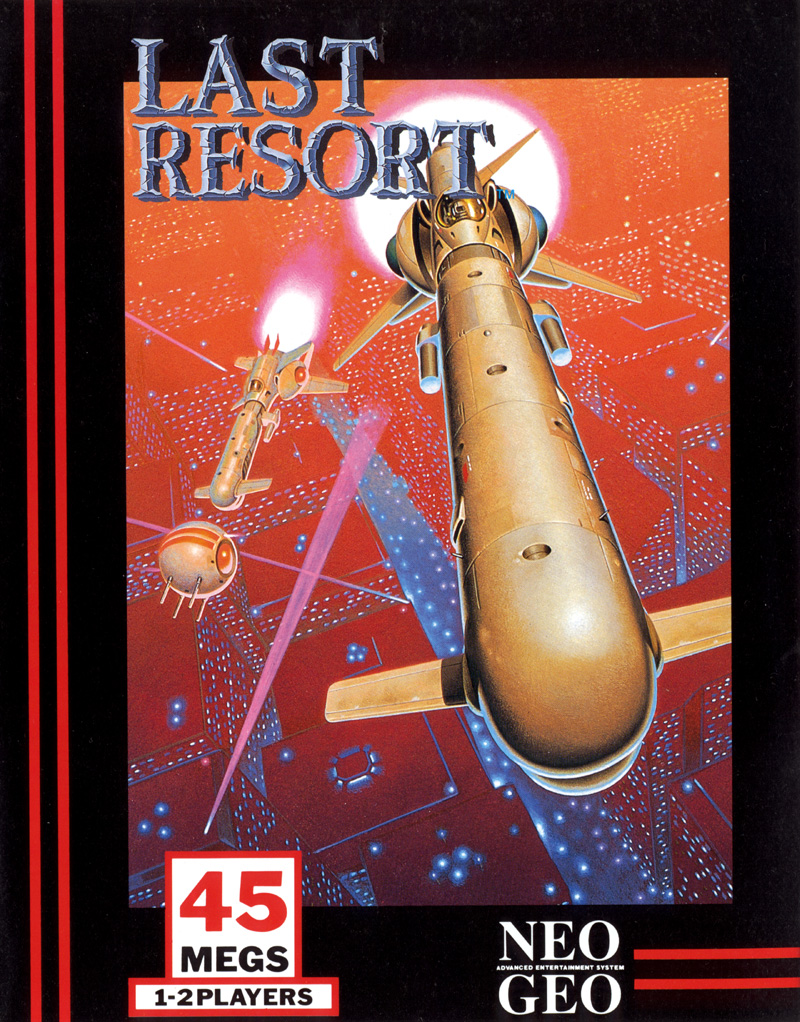 Last Resort is a hard game to judge because it’s more than the sum of its parts. While its gameplay feels intricate but accessible — a feature any horizontal scrolling shooter must possess in order to astound — it can be daunting at times. What’s most significant about Last Resort, however, is its ability to blend strategic shooting and mindless spray and pray. The game also can’t be talked about without making mention of its imaginative sci-fi world that evokes a nostalgic sense of Blade Runner and various other cyberpunk epics. Impressive is the world for Last Resort.
Play it 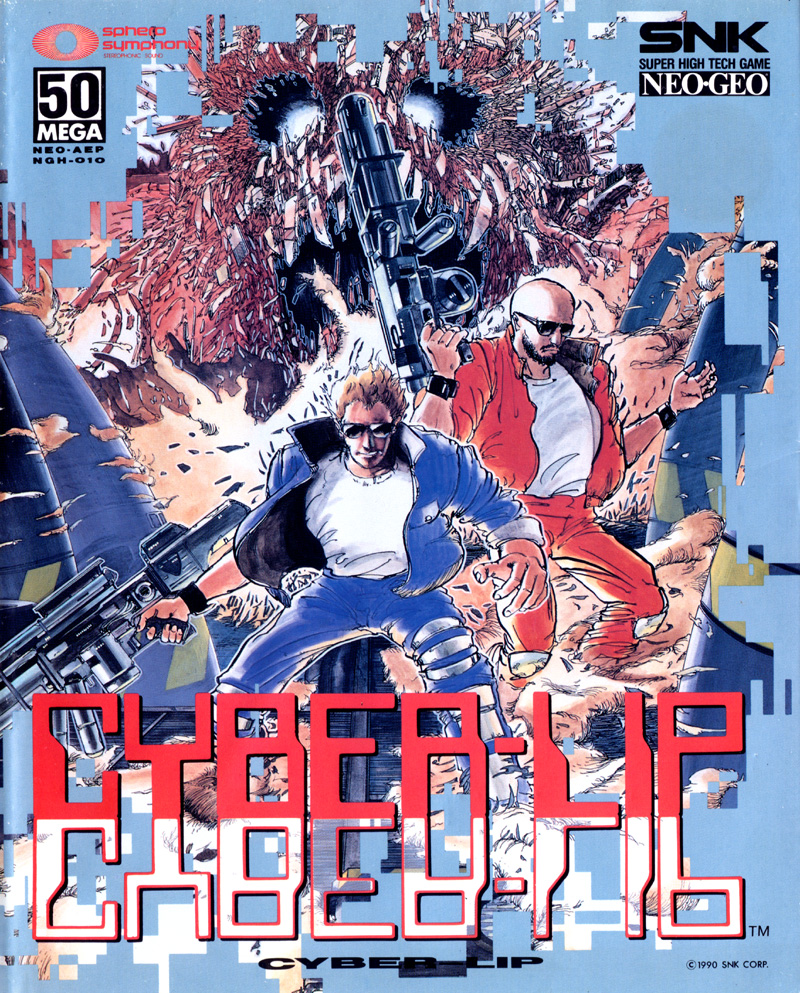 While snooty Neo Geo enthusiasts would have you believe that Cyber-Lip is something of a joke, it’s actually a thoroughly entertaining shmup. Riding the post Terminator late ‘80s grime, Cyber-Lip is a cyberpunk game that takes place in the near future (2016-2030 AD) where the world has become so overcrowded that people are sent to space stations to alleviate the problem. Unfortunately, aliens start to invade, so androids are built to combat them. Even more unfortunately, the androids replace our army, so when they inevitably rebel, there’s nothing to stop them…besides you. Players take on the role of either Rick or Brock through a series of grimy, but colorful, levels to blast the androids into robot hell. There’s some really cool animation in here, featuring quite a few grotesque (even by today’s standards) bosses along the way. One of the most notable features is the ability to swap weapons, ranging from flamethrowers to grenades, on the fly by tapping the C button. It’s a blast through and through and features a cheesy retro vibe that’s impossible to replicate now. Better yet, it’s one of the few games on the console with unlimited continues, meaning even the worst Cyber-Lipers can see the end of the game — complete with a twist.
Play it 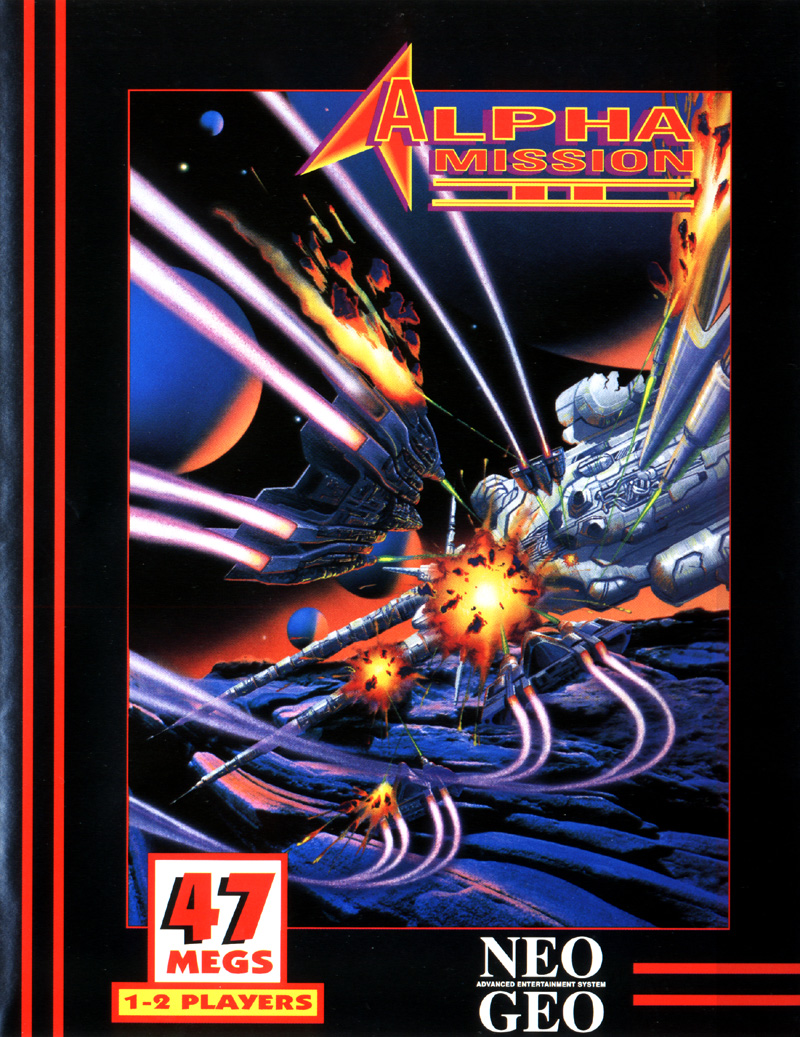 A sequel to a game released way back in 1985 (and a year later on NES), Alpha Mission II bested its predecessor in nearly every way. While it may not be as well known as titles like Raiden or Ikaruga, it’s a solid little shmup in its own right. As always, there’s no story given, with players simply taking on the role of a spaceship and blasting $#!^ up. An early “bullet hell” entry, the constant amount of projectiles and enemies on screen add up to blistering difficulty. There’s some great boss battles and level design in here that rival the best the genre has to offer. Powerups can be collected and stacked to make weapons more powerful, giving motivation to snag ones already picked-up. Perhaps the most unique aspect of the game are the collectible power weapons that are acquired in parts and unleash a devastating super attack by selecting it in a menu with the C button when fully obtained.
Play it 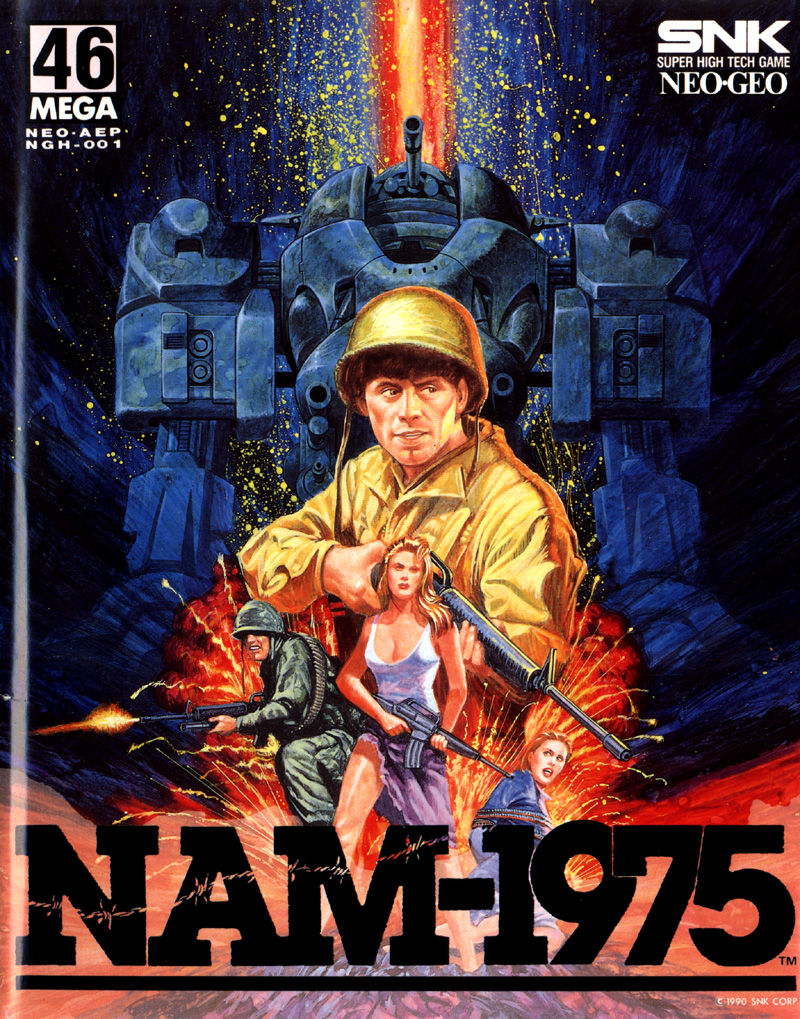 Released in 1990 as one of the first games for the Neo Geo platform, NAM-1975 was decidedly ahead of its time. Featuring impressive visuals, fast gameplay, multiple environments and voiced cutscenes, NAM-1975 deservedly drew gamer’s attention to the new brand. A third person action shooter, its unique gameplay still dazzles 21 years later, which sees the player moving across multiple environments while blowing away soldiers, tanks, helicopters and boats. Various weapons, grenades and power-ups are collected throughout the stages to assist with its challenging, but rewarding, gameplay. What’s more, the game actually has a story that’s comprehendible (if not poignant), chronicling a special forces soldier called back into duty in 1975 to rescue a doctor kidnapped by terrorists. One of the best games in the NGX line-up, Nam-1975 has aged better than some titles that came years after.
Play it 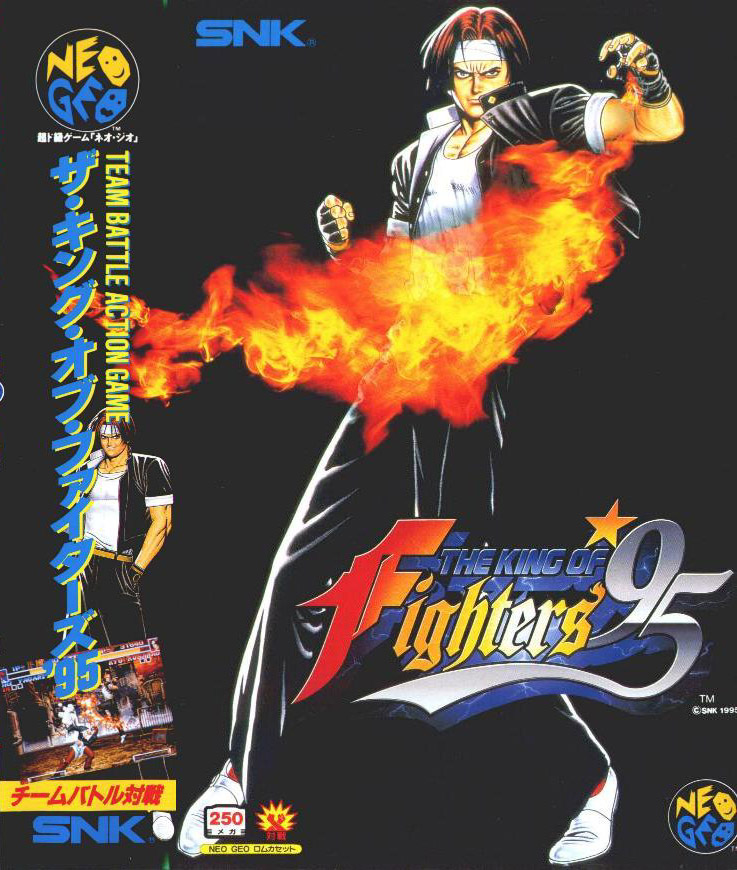 During its time, King of Fighters 95 was a very competent fighting game. It had style; it employed mechanics not otherwise present in many other similar games and provided personalities unmatched by its rivals. Unfortunately, King of Fighters 95 has not matured well. As it is now, it feels clunky, slow, ugly, offensively difficult and generally archaic in its design. What’s most depressing are the unresponsive controls. As a fighting game, the only element that should be present and well intact is how it all controls. When that’s broken, so is the experience. We can’t give KOF95 a glowing review, or even a halfway decent one, because it’s unworthy of it. The King of Fighters series has some real gems in its lineup, but this isn’t one of them.
Skip It 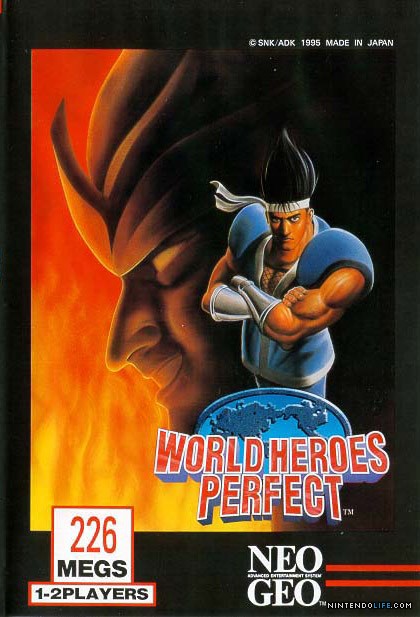 World Heroes Perfect is the fourth and final installment in the ADK-developed World Heroes series. Yes, it’s another four-button fighter similar to just about every other fighter on the NGX, but mixes up the recipe with subtle changes. World Heroes Perfect also looks great on the system because of how vibrant the color palette is. Better still, it plays without any snares. It may not have the most interesting group of characters, and in truth, it will probably be overlooked in this compilation thanks to the stellar line-up of other, more well-known fighters, but it shouldn’t be. It shouldn’t be because it has a lot to give those looking for a slightly different take on the genre.
Play it 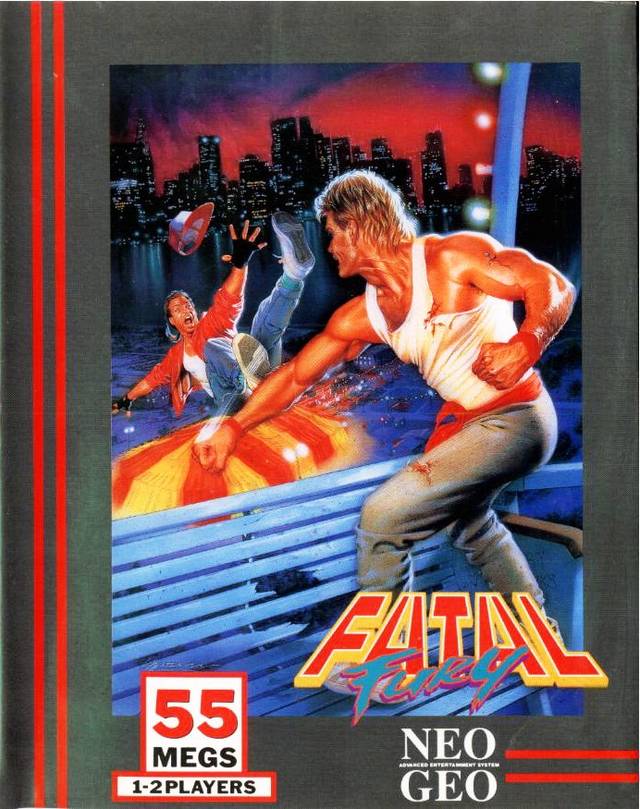 Fatal Fury: King of Fighters is the perfect example of a fighting game that aged poorly. While later entries in the series would go on to be some of the best the genre has to offer, this early outing was riddled with bad controls and slow gameplay. Still, as it’s the first SNK fighting game for Neo Geo, the outdated gameplay is certainly excusable (though still not playable) and it’s neat to see where famous characters like Terry and Andy got their start. Luckily the series began to improve with…
Skip it 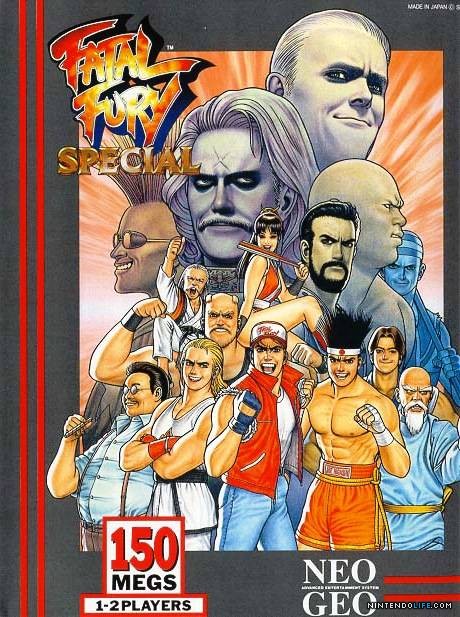 This one is a little better. An updated version of Fatal Fury 2, Fatal Fury special features much faster and deeper gameplay then its predecessors. Combos were also added for the first time, allowing players a moment of immunity after landing an attack. It’s a challenging (if not cheap) fighting game that will have fighters often frustrated, but it’s certainly playable on a more serious level with genre fans. That being said, it still hasn’t aged well and better entries in the series remain like…
Skip it 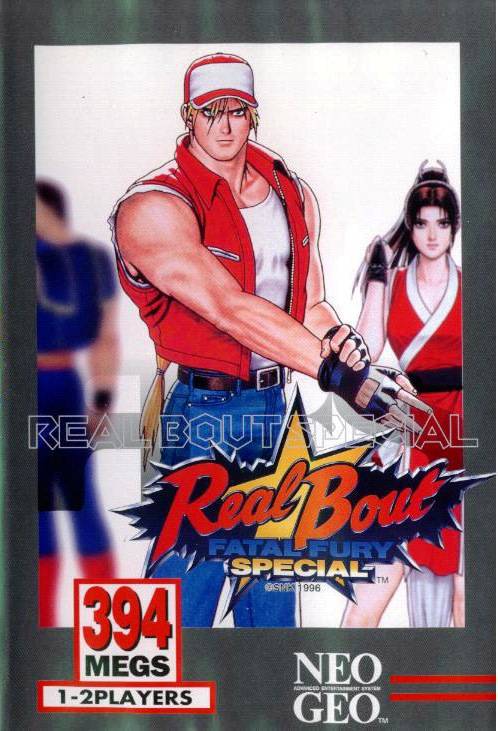 Real Bout Fatal Fury Special is one of those fighters that have managed to stand the test of time. From its rock solid gameplay to aesthetics that have aged like a fine glass of wine, Real Bout is one of the best games the Neo Geo has to offer, but more importantly, the hands down fighting favorite on the NGX. Its cast of characters, while only clocking in at ten, provides a handful of the most unique and diverse fighters around. They’re extremely well-balanced to boot, and each comes complete with silky smooth animations that look elegant even by today’s standards. In the end, Real Bout Fatal Fury is the total package; a timeless classic that deserves to be experienced by anyone who has access to it.
Play it 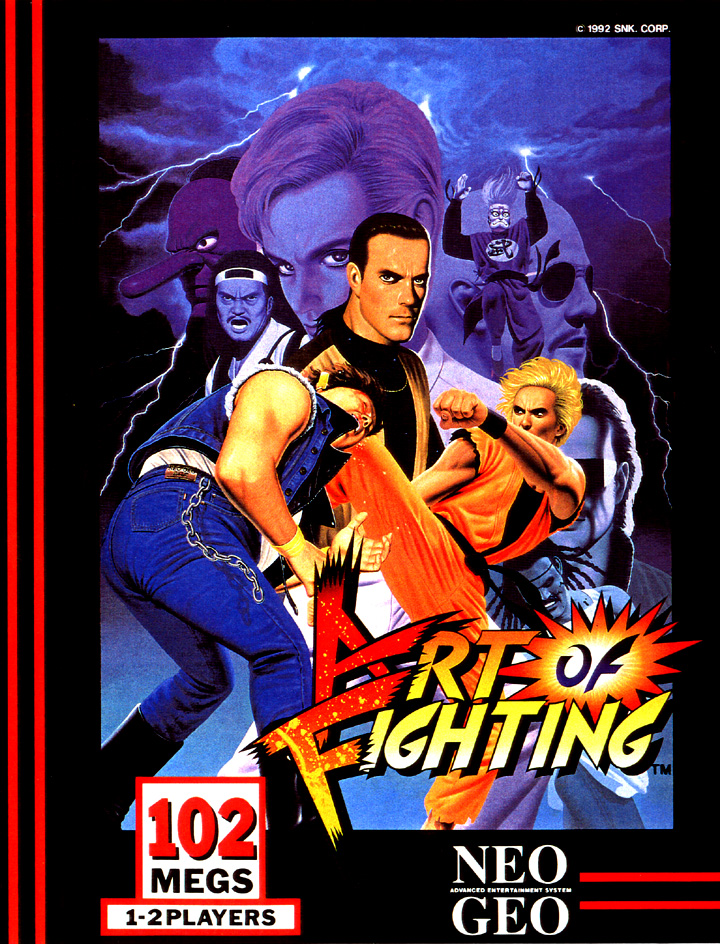 Art of Fighting is not our favorite fighter on the system. In fact, it ranks at the bottom of the list because of how painfully slow it plays. It’s not slow in a cerebral, methodical, intelligent way. Instead, it’s a prodding, sluggish, and generally boring kind of slow. In truth, it doesn’t offer all that much to the fighting genre other than its giant sprites, which are absolutely titanic. They’re so massive that each one takes up roughly 25 to 30 percent of the screen and make the mechanics feel all the more cumbersome and awkward. There are great, good and merely average traditional fighters on the NGX. This certainly is an entirely average game, if not worse.
Skip it

King of the Monsters 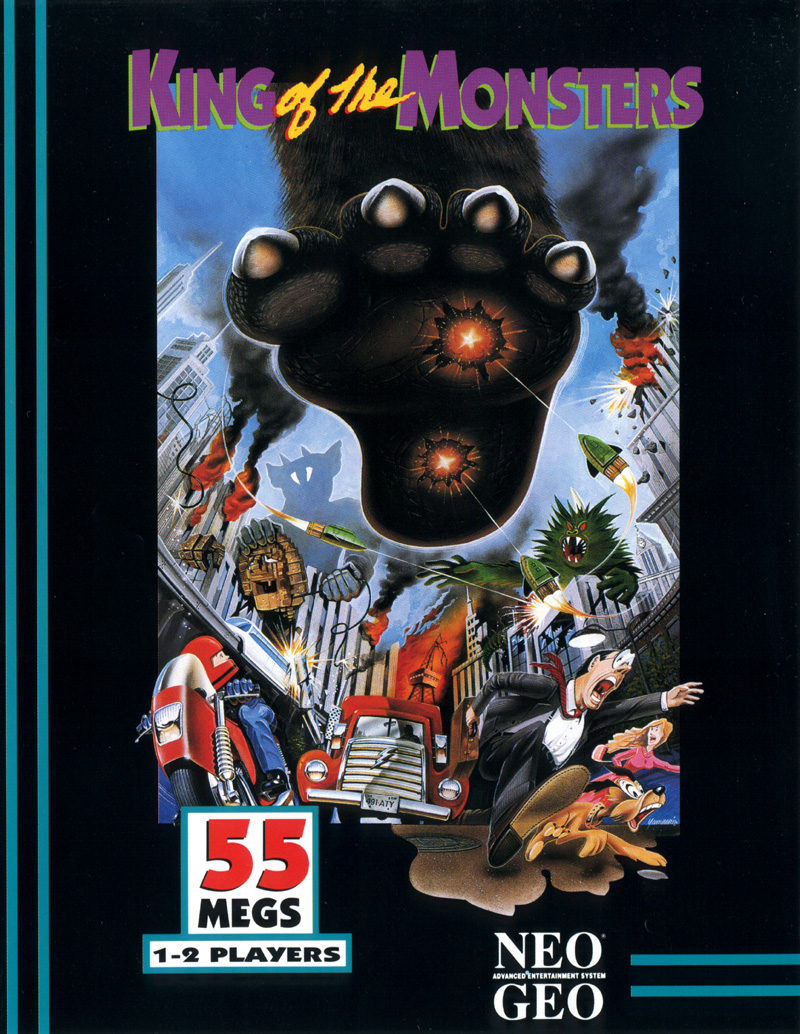 Putting a bunch of giant monsters in a game to battle each other while wrecking havoc over human civilization should be the recipe for fun, but instead is simply one for an awful game. After choosing a Gojira, players can play either against the CPU or each other. Interactive levels are featured that can freely be moved through and are seen from a unique sort of top-down/side-view hybrid. Included are some of the most clunky controls to ever grace a fighting game, complete with delayed reactions and frequent miscued moves that ensure the enemy can begin a combo that takes half your health in the time it takes to punch or kick again. It’s hard to move around and the difficulty (or cheapness) of the CPU makes it all the more frustrating. The only positive that can be said about it is that its unique viewpoint and interactive maps (where an entire city can be leveled and helicopters grabbed out of the sky and thrown) has a nostalgic charm. Unfortunately, even the most deserved nostalgia can’t overcome the frustration of poor game design — and deserved this ain’t.
Skip it