Everybody has that one console close to their heart that impacted them as a gamer or even a person. For some, it’s the Super Nintendo, Playstation or Sega Dreamcast. For me, it’s the Neo Geo. While I had (most) and loved (all) the original 8-64 bit systems growing up, nothing quite meant as much to me as the one that rhymed. That’s not to say I could afford an AES; with $200+ games, the console was reserved to adult enthusiasts and rich uncles who wanted something to entertain kids the few times a year they saw them at family functions. Instead, it was the MVS that first caught my attention. A Pizza Hut close to my family house had one that I would frequently ride my bike to just to get a few rounds in with Last Resort or Bust-A-Move. Nothing could beat the richness of the colors, arcade controls and the friendly and inviting vibe of its bright red cabinet. Admittedly, due to its low exposure compared to other gaming brands, I always relished in the thought that I was more individual than my peers for being an SNK faithful — like I was part of a secret club of refined gamers. All throughout the ‘90s, I simply had to stop and play the Neo Geo wherever I saw it. My infatuation only became more intense with the release of the Neo Geo Pocket Color. Even though it only had a life of about six months in America, I played my blue NGPC more than any other console all the way until the Game Boy Advance — and didn’t even stop then. Interests and taste change, but the Neo Geo has been a part of my adventures in gaming since its inception.

That long-winded confession said, it’s not hard to imagine my excitement when the Neo Geo X was first announced. A handheld Neo Geo AES with accurate emulation in 2012 is a thought so unbelievable that I didn’t accept it as reality until the box showed up at our door last week. Even still, I was skeptical that it would truly prove worthy of the name. I may be lifelong brand devotee, but one with an AES, MVS PCB and a ton of Neo Geo games; it’s not getting an easy pass. To deserve a place on gamer’s shelves, the Neo Geo X has to be more than all in one system with a nice design; it has to truly represent what the brand meant to devoted gamers in the ‘90s.

While it may come with a docking station that resembles an AES console, it’s the handheld that is the heart and soul of the experience, both functionally and visually — and for good reason — it’s absolutely beautiful. While many reproduction handhelds (and even some original) feel cheap or low-end, the Neo Geo X has a fantastic build quality in almost every area. It has a great weight to it — heavy enough that it feels substantial, but light enough that it could easily fit in a pocket. The face of the console features a glossy hard plastic casing (possibly polycarbonate) with a glass screen. There are “Neo Geo X” and “SNK” logos placed below the screen and above the thumbstick respectively, using the original font and bringing elegance to the design. Button-wise, there are four face buttons, a start and select button, plus an L1/L2 and R1/R2 buttons above and volume/brightness control below.

The face buttons feel fantastic and feature sleek gold font, but arcade replication would have been improved had the crescent shape of the AES arcade stick been used. The L/R buttons also seem fairly pointless at this stage, with the right side pausing the game and the left size switching aspect ratios. Perhaps in the future they’ll be used for consoles outside of the AES, but there’s not a single Neo Geo console that has them, so they’re certainly an odd design choice however it’s sliced. The back of the console is rubberized, making it very comfortable and easy to grip for long gaming sessions, and features a handsome reflective silver SNK emblem adorning it. The bottom of the unit has a headphone jack, while the top has HDMI out, mini USB and AV out. 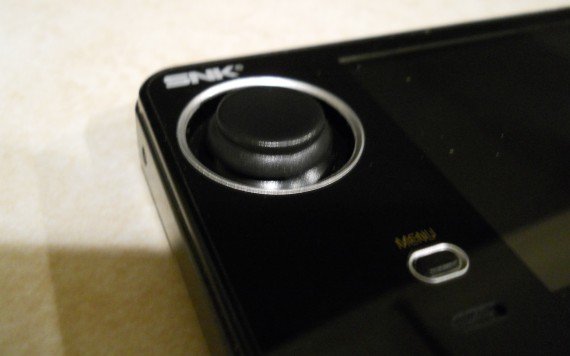 Hardware-wise, the highlight of the handheld is its thumbstick. Unlike the analog sticks of today or d-pads of the past, it can move in any circular direction while still quickly snapping back into place. It’s very reminiscent of the Neo Geo Pocket Color thumbstick, but larger and more clicky. It’s the perfect fit for a handheld Neo Geo and works excellently with every game released so far.

While low-res, the screen itself displays the games very similarly to what one would expect from an old CRT and has fantastic color reproduction. The biggest problem here, and in general with the console, is that it’s a 16:9 widescreen (or a little less I’m told) native display. This is a problem because Neo Geo AES games were originally in a fullscreen 4:3 ratio, so games must be stretched out to display properly. While it doesn’t look bad, it certainly doesn’t help preserve the originality of the affairs and nothing — movies, television shows or games — look as good when they’re not in the original aspect ratio. Luckily, tapping one of the L buttons (which must be done every time a new game is started) does change the aspect ratio to 4:3, where games look fantastic. Of course, the problem here is that they become pillarboxed with large black bars on each either side of the picture and tiny ones above and below it. It’s still big enough to see clearly and is probably bigger than the NGPC screen is, but not having it filled takes away from the experience.

While the handheld looks high end on the outside, the few menus and font used in the software look like something out of a cheap Game Boy knock-off. There’s no central menu for settings, with the menu button simply bringing up the option to “Play” or “Quit” a game. When the console itself boots up, you get a scrolling selection of the built-in games, with one icon reserved for the game card. That part looks fine, but something classier and more functional could have certainly been put together for the entire package. Games boot up quickly, with the game card taking a few seconds longer, and feature the original  “Neo Geo MAX 330 Mega Pro-Gear Spec” launch screen.

Perhaps the biggest issue here is the inability to save games or add continues. While most AES titles didn’t originally have the option to add virtual credits (to make the game seem more substantial at home), the MVS did and it’s a feature that could and should have been included. Casual players will be frustrated that they can only get a level or two into a few of the games before getting a game over — a fantastic way to alienate a good portion of the market. One thing that should be noted, however (and this is in no way an excuse), is that having the inability to continue more than a predetermined amount of tries can make the games more enjoyable. For instance, with unlimited continues, many games can be blasted through in under an hour with little care for how well they’re played. Having only 3-5 continues forces players to actually hone their skills and learn how to play the game the way it was intended. Still, even if it can be considered a positive, it was certainly not intended that way and was clearly left to avoid the time implementing it. High scores are also not saved (a drawback shared with the AES), which is annoying for anyone regardless of skill.

The shortcomings in both the software and hardware design are inexplicable for something of such impressive build quality that mimics or pays homage to its predecessor well in other areas. The odd decision to go with a 16:9 screen and top buttons lead us to believe that perhaps the handheld was originally meant to be a general emulator until the idea came about to make it Neo Geo exclusive. Regardless of its nagging issues, though, it really is a beautiful machine that still feels like something SNK would have released in the ‘90s had the opportunity arose. 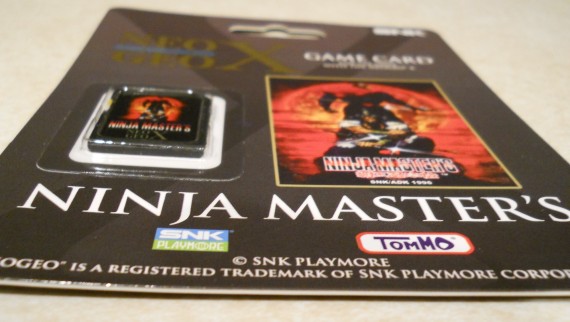 Of course, the most important thing here is how the games play, and thankfully, it’s very well. There’s been recent murmurings that the console is actually using Feed Burner Alpha for its emulation, but whatever it turns out to be, it feels incredibly accurate. Games have the correct framerate and look almost indistinguishable from their console/arcade counterparts with the right color timing and crispness to the font. Graphically intense titles frequently exhibit the correct slowdown, which has always been an issue  with capturing the essence of the original experience. It’s rare when an emulator makes it feel like a game is being played on the original hardware, but the Neo Geo X does just that in a way we haven’t experienced before. The only real issues with the emulation is that there is persistent screen tearing in many of the games. This likely has something to do with not including V-Sync and should have been corrected before the console went gold. It doesn’t inhibit the games, however, and is hardly noticeable when playing on the handheld itself. As for the games themselves, a nice line-up of 20 games (plus Ninja Master’s if you get the Limited Edition) is included that represents the meat and potatoes of the Neo Geo brand. There are some bad games in the bunch, but they’re all at least nostalgic. For a full chronicle on all included games, make sure to check out our hands-on feature.