After yesterday’s brouhaha, I’m half afraid to report on tweets from Hideki Kamiya. But then again, so long as I don’t call him “clueless” and turn a 10 word tweet into an indictment of the Japanese game industry, I should be ok. So here goes: Kamiya has tweeted that a new trailer for Bayonetta 2 will be released next week…on the web. 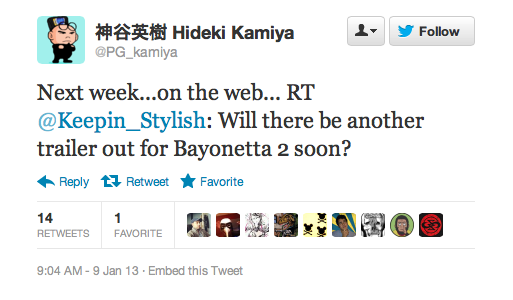 Hopefully Kamiya means it and we’ll get to see Bayonetta in action…on the web. In the meantime, watch already-released footage of the game set to rock music.