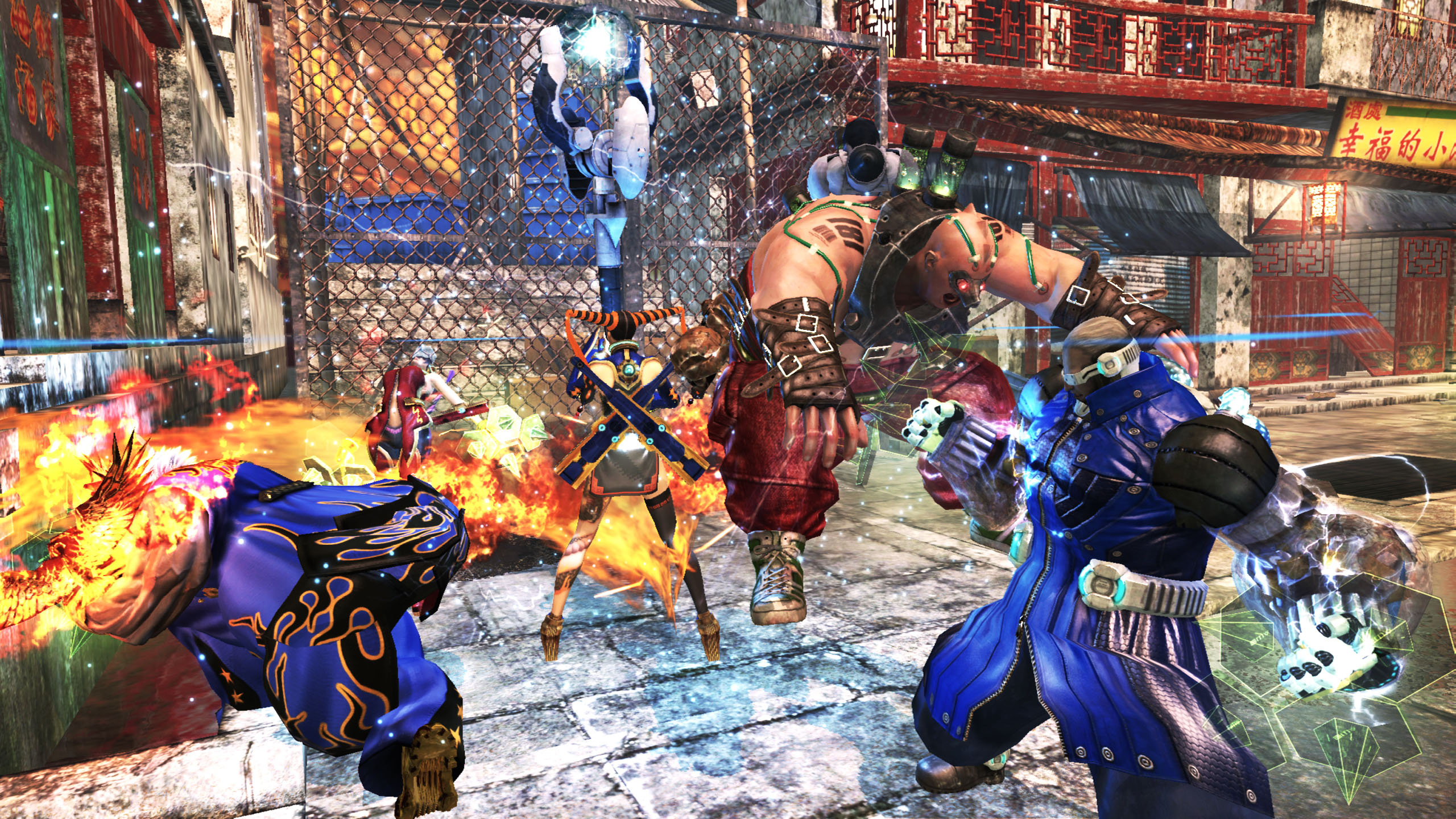 Anarchy Reigns is, on one hand, not what some will expect from a beat ’em up thanks to its unconventional approach to, well, just about everything. Taken as a Platinum Games release, however, it’s par for the course. Besides bizarreness, they’re also recognized for putting out titles with rock solid mechanics, over-the-top action and colorful casts of characters that feel unique and utterly refreshing; all of that epitomizes Anarchy Reigns. Though it offers a different experience from anything else out there, it will be familiar enough to those who may have played Platinum’s previous work, such as Bayonetta or MadWorld. And like those two specific titles, Anarchy Reigns is all about giving players some of the highest-octane brawling in existence. It’s not a flawless fighter, and certainly has some issues; but given the overall walk-away feeling, those aspects might be easily overlooked.

Anarchy Reigns is a game that draws inspiration from a number of sources. Up front, it’s easy to recognize its ties to MadWorld, considering many of the personalities here are borrowed straight from the grossly underrated Wii fighter. In fact, the game’s storyline revolves around Jack Cayman, the protagonist from MadWorld. While the plot of Anarchy Reigns is not Platinum’s most profound, it is nonetheless one of their best, and hands down their most entertaining and succinct. There’s a little bit of everything: melancholy, crude humor and outlandish one-liners that will light up smiles. The cast is large and diverse, and even though many of the personalities are returning stars from previous Platinum titles, they are fantastic in their reprisals, as are the newly established heroes. That being said, much of it is indeed typical Japanese craziness with cock-diesel blokes and big-chested femme fatales, so for those indifferent or abhorrent toward such things, the narrative mayhem may prove to be a tough pill to swallow.

Either way, all of that may be forgotten once the gameplay begins because combat in Anarchy Reigns is the true show-stealer. It hones in on the concept of delivering hard-hitting action, and never once fails to create the most intense, fast-paced brawling possible. Better more, it conjures up nostalgic feelings of playing the combo-heavy Bayonetta, as well as Capcom’s long forgotten Power Stone series, which focuses more on button-mashing in the midst of multiplayer madness. What it shares most with those titles are the engaging battle mechanics underlying each skirmish.

AR sticks to the basics and is actually fairly timid in its delivery and presentation in this regard. Whereas Bayonetta was a deep beat ’em up with an overwhelming number of attacks and constant combo-stacking, Anarchy Reigns feels more focused and tight due to its combo system which is less expansive. The shameless 90-hit assaults made famous by Platinum won’t occur too often, unless you unleash your character’s special attack. In that regard, the studio’s newest fighter feels tame, but elegant in its concerted aim.

In addition, each character comes complete with their own set of moves, none of which are difficult to pull off. That’s the brilliance of the game: anyone can pick it up and start playing immediately, no manual or tutorial needed. Provided are normal and heavy attacks, along with a few other secondary and tertiary commands, all of which are shown in a diagram while waiting for the game to load — and that’s it. Skipping past the hubbub, players are thrust headlong into warfare without worrying much about how to play the game in the correct, intended way. As a result, Platinum has found a nice balance in providing accessibility and depth in one fell swoop.

There are some missteps along the way, however. Some of the battling can be cumbersome and challenging to control. The fighting usually goes off without a hitch — and when it does is a blast — but occasionally attack precision can be marred thanks to an erratic camera, which tries its best to work with some of the more enclosed environments but fails. Frustration can set in at this point, and is made worse by the fact that, regardless of the game being a brawler through and through, it lacks certain qualities that are expected to be present in such a game. There’s no dodge-cancelling, extended juggling or intricate counters to be found. This may lead some to conclude Anarchy Reigns’ combat is too meager in its design. But in thinking that, one would be missing the point of the game, which is all about balance and user-friendliness.

Aside from these missing features and the occasional camera issues, the game controls like a champ and is super responsive. Likewise, the AI is smart and challenging, but never cheap. I often realized that, when I died, it was because I simply wasn’t good enough to best the enemy before me, not because the game cheated its way to victory. This was made all the more apparent in the heinously exciting boss battles. A compelling duel with one of the game’s many secondary characters complete with great dialog exchanges to bookend the fights is one of the motivating factors that makes putting the controller down an exasperating deed in itself.

As mentioned, the game doesn’t include the more intricate workings found in other brawlers, including some of Platinum’s own, but these were consciously implemented design choices meant to balance the game’s main draw: multiplayer. While Anarchy Reigns offers two different storylines to play through in its single player campaign, they’re over far too quickly. To make up for this, the game is seemingly built around its competitive experience. Featuring up to eight-on-eight battles, the blistering versus component feels holistically satisfying. Ranked, player and private matches, downloadable content and leaderboards only make matters all the more enticing.

The scuffles are great in the same way that the frantic battles of Smash Bros are; at times, coordinated attacks or well-conceived strategies feel especially fulfilling, when they go according to plan. Of course, things can break down in mid-match, causing players to change their tactics on-the-fly. The problem here is the hard-to-predict nature of fast-paced battling, which can sometimes spiral into a mess of chaos and the mashing of buttons. This robs matches of any kind of intelligent strategies, but this problem is that of the genre’s rather than Anarchy‘s.

Fortunately though, with the limited attack options, the game’s multiplayer actually feels approachable (a problem with too many games of this kind) and as a result extremely rewarding. Here, someone who doesn’t practice nearly as much as the kid who has ten hours a day to play still stands a chance at winning, or at least holding their own enough to have an enjoyable experience. What’s tragic is the lack of local multiplayer, which is sure to upset that dying breed of gamer. This sort of game, however, is the ideal one for such a feature. Not including it feels impractical.

In terms of presentation, Anarchy Reigns is well put together. The game’s soundtrack is an audio buffet of all sorts of awesomeness. Hip hop inspired tracks play between missions in the open-world where you beat up random baddies to increase an overall score value used to unlock the next story or free mission. Opposite of that are the heart-pounding, rock symphonies that crush eardrums during the boss duels. While on the topic of sound, Anarchy Reigns’ voice-over work is seriously some of the best in recent memory. Each character is extremely well-casted, combining believable accents and language nuances to form gripping cutscenes and delectable talking segments. Although the graphics aren’t dazzling, the art direction and overall localization are spot-on, and is quite frankly Platinum’s best to date. 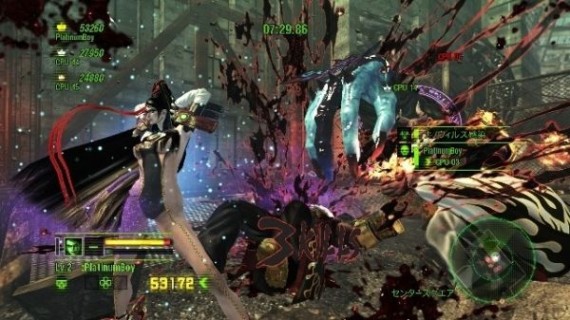 The truth is, despite lacking a certain level of polish one might expect from Platinum Games, Anarchy Reigns is a brilliant title in both its concept and execution. The combat is as engaging and exhilarating as anything else on the market, and possibly even more so thanks to its unique take on a by-the-numbers genre. This is especially true when discussing the fully-featured multiplayer mode. Sure, the battling mechanics may forgo the depth found in other titles, and the camera can be a real bastard, but the game makes up for that in a variety of other, more important ways. It’s fast, frenetic fun that is meant to be enjoyed through the chaos of powerful attacks, short-burst combos and grab-throws reminiscent of moves found only in pro wrestling. Everything is over-the-top, and ultimately, the game is better because of it. In short, Anarchy Reigns is a true gem; a holistically robust experience that is lovingly crafted, expertly balanced and capable of providing hours upon hours of brawling excellence. It may not be Platinum Games’ most technically sophisticated piece of work, but it’s damn good all the same. For $30, it’s a total steal, and a great way to kick off 2013.