Note: Portions of this review appeared in our Xbox 360 review of DmC: Devil May Cry.

DmC: Devil May Cry just can’t catch a break. Here it is, a day from release, and fans remain up in arms over the latest iteration of the beloved series. It doesn’t matter how many times Capcom assures otherwise, what a plethora of glowing hands-on previews report and even how an admirable public demo plays; the consensus that DmC is not a good game remains. Frustratingly, this sentiment isn’t the result of the visuals, gameplay or production value; it’s because Ninja Theory developed it and Dante is a brunette rebel. It’s a shame fans have to be so obstinate, because they’re missing out on what may be the best Devil May Cry yet. Not only has Ninja Theory persevered what made the series so lovable in the first place, but vaulted the franchise in a new and exciting direction.

Even though the story, setting and tone of the DmC reboot have been the main points of contention with longtime fans, they’ve ironically proven to be its strongest elements. Players take on the role of Dante, a brash twenty-something year old male who lives in a Airstream at a pier. Spending his nights partying, drinking and having “casual” relationships, Dante’s life is on a downward spiral into debauchery and sin until one day his world is turned upside down (literally) by a gigantic demon. Dante quickly learns he is in limbo: an unseen parallel universe twisted into a demented mirror of itself and filled with monsters. Dante discovers that he is not human, but actually a half-demon/half-angel hybrid known as a “Nephlim” — one of two in existence alongside newly-reunited brother Vergil. Their parents love was forbidden, driving the demon king Mundus to murder their mother and forever banish their father (Sparda) to purgatory. Now, Mundus and other demons are living amongst humankind, enslaving everyone from world leaders to pop stars through an energy drink known as Virtilty. 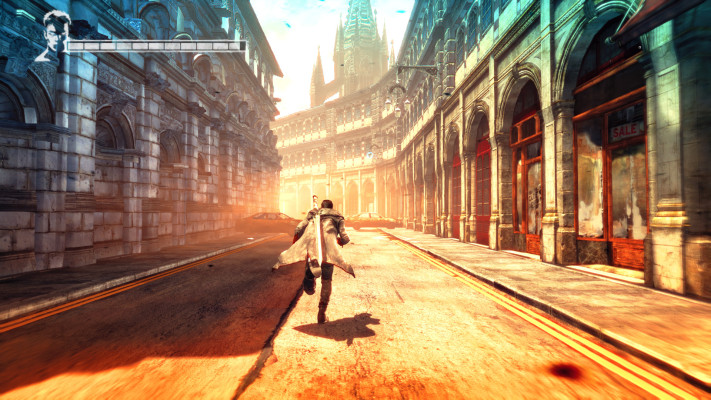 The last line of defense is known as The Order, an organization that has amassed crucial resources in an effort to fight the demons. One of these is a new character known as Kat, a young runaway female psychic taken in by Vergil to assist Dante in making his way through Limbo. Throughout the game, the three band together to attempt to usurp Mundus and free humankind by infiltrating and destroying his various endeavors. The plot is serious and can even get quite poignant at times, but the tone of the game is decidedly absurd. Dante frequently makes humorous quips and one-liners laced with enough expletives to render them impossible to quote here, but suffice to say, make for some wild back-and-forth exchanges. While he may not take the dire situations he’s in seriously, his attitude matches the circumstances of his character and does grow more mature as the story progresses. It’s a great take on the character that is a match made in heaven (or should we say hell) with the sheer ridiculousness of the rest of the affairs.

And ridiculous they are. Levels range from infiltrating the Virility factory (full of disgusting tentacles and spewing green liquid) to going inside of the news itself to destroy the virtual manifestation of renowned anchor Bob Barbas. A later favorite has Dante infiltrating a nightclub to find Mundus’ mistress Lilith, only for it to transform into a twisted America’s/Britain’s Got Talent parody dubbed “The Devil Has Talent”, while lights and huge equalizer bars strobe in the background and Lilith manifests herself as a flashing gold disco ball. Even the less flamboyant level designs aren’t repetitive; a handful of levels take place in the same environment, but specific design between them is drastically different. If the inherent eccentricities of the levels weren’t enough, giant words and insults appear plastered across environments, making for quite the visceral experience. Part of a genre known for drab and lifeless environments, DmC proves just how much more entertaining the action is when creativity is allowed around it. 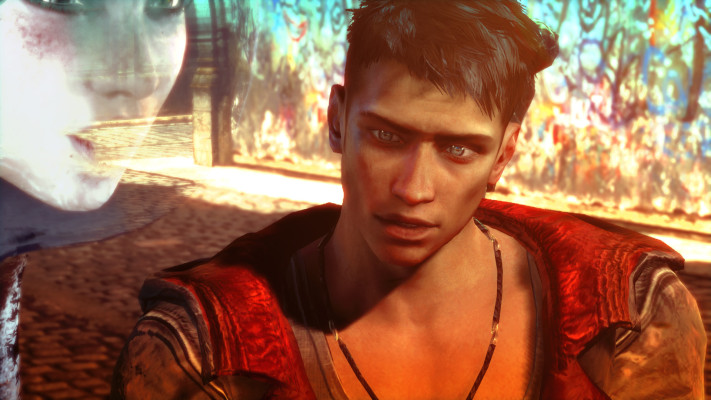 Of course, the main draw to the series has always been its fluid action, which is not only preserved here, but enhanced with creative flourishes that only Ninja Theory could provide. It remains a deep hack and slash, with the inclusion of around a hundred different executable moves by a number of different weapons, including Arbiter (flaming axe), Eryx (flaming gauntlets), Aquila (shurikens), Revenant (sawed-off shotgun) and, of course, fan-favorite Ebony and Ivory. One of the most rewarding weapons to use is Osiris, a large scythe that can take out a whole wave of enemies at once. While it may seem like an over-abundance of weapons would result in their dissuasion, the wide variety of enemies encountered are more susceptible to different weapons, ensuring that they all must be utilized to be most effective. Some enemies are only vulnerable to one of the two weapon types, demonic or angelic, which adds a entirely new level of strategy to affairs that grows intense when two demons of different types are thrown on screen at once.

As rewarding as combat is, the perfect balance with the excellent platforming truly makes the game a cohesive experience. Besides jumping and boosting between platforms, Dante can swing around fluidly thanks to Ophion Demon Pull and Angel Lift (much like Snatch and Hell Bound from DMC4). Demon Pull pulls an object towards Dante with E+ RMB, while Angel Lift pulls Dante towards the object with Q + RMB. Not only are they utilized to make him swing around like Monkey (required Enslaved reference), but can also be used against enemies — propelling him towards one or ripping the shield off another. Of course, both also improve puzzle solving aspects of the gameplay, allowing for Lost Souls and keys to be hidden in more inconspicuous areas. These hidden items are a blast to search for, with keys unlocking hidden doors that reveal secret missions and Lost Souls increasing your score and granting red orbs.

Red orbs return from past DMCs and are obtained from slain enemies or slashing various interactive items throughout environments (including frequent egg-sack looking things). They’re used both to factor into the final score of a level and as in-game currency. Either between levels or at Divinity Statues scattered across levels, health extensions, golden orbs (used for resurrection) and boosts for Devil Trigger can be purchased. Devil Trigger does indeed reutrn from past games, which here launches and suspends enemies in mid-air, allowing for easy disposal while health is regenerated. While enjoyable, perhaps its biggest purpose is for fan-service, as Dante’s hair turns white and his coat and eyes turn bright red upon activation — an obvious homage to the original demon-slayer. 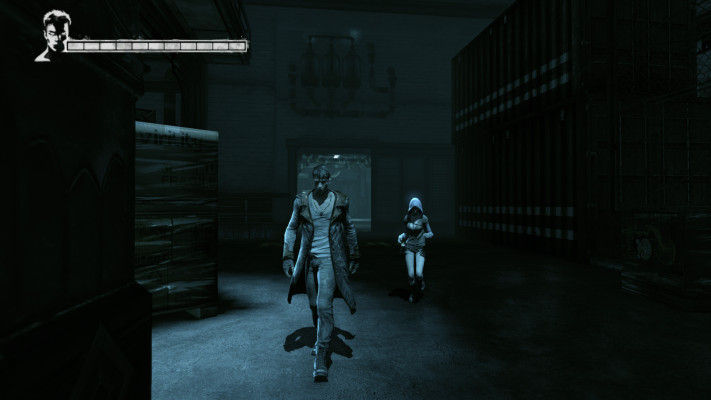 The Devil May Cry franchise isn’t as unfamiliar with the PC space as one may suspect, but it’s still a series mainly known for its console roots. The optimization of the PC port of DmC is perfect as, even though it’s not all that demanding (thanks to the Unreal Engine), it keeps a high level of performance all the way through. Running on a relatively powerful machine, the game never dropped below 100 frames per second and averaged fifty higher.

Graphic fanatics shouldn’t expect a whole barrage of options to choose from; it mainly boils down to one slider and a couple of checkboxes asking if you want a better looking experience. They certainly help though, as the visuals are an incredible step-up in quality, especially in the gameplay department where the world looks as if it’s about to pop out of the screen. That isn’t to say the console counterparts were ugly by any means, but higher resolutions, anti-aliasing and HD textures make this an even more vibrant visual spectacle.

In terms of keyboard and mouse control, swapping between demon and angel weapons almost feels simpler, up until you have to use a special attack that is normally assigned to the B button. Granted, rebinding the keys is an option to make things easier, but by default, Dante basically has to be stop moving in order to use his demon and angel special moves. Also be aware that PC gamers will more than likely wear away their right mouse button by using Ebony and Ivory. 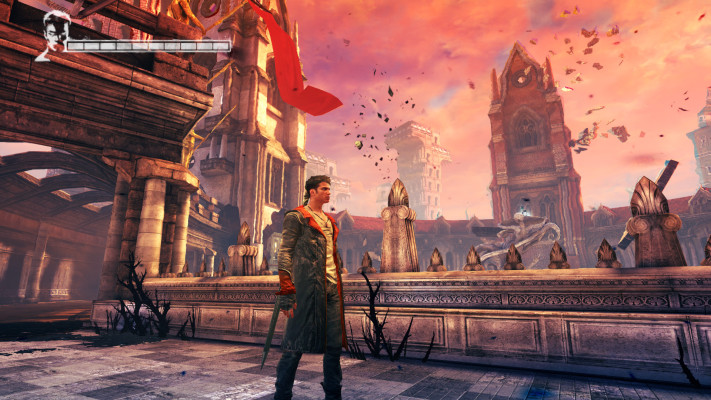 Ninja Theory has not only managed to match the level of excellence achieved in the Devil May Cry series, but exceed it with the visually arresting and exhilarating DmC: Devil May Cry. Every element is perfectly in place with dynamic gameplay, inspiring level design, a fantastic Noisia/Combichrist soundtrack and an over the top modern tone that wholly compliments the series. Combine all that with a 15-20 hour campaign full of an emotionally resonant (and often outlandish) story, and all but the most jaded gamers will walk away satisfied. In what seems like commonplace lately, the PC version of DmC: Devil May Cry is the definitive version to play. While the mouse and keyboard controls aren’t as precise as playing with a controller, the graphical upgrades and increase in frame rate make an already impressive game even more stunning. DmC is a leap in the right direction for the series and an exciting fresh start for the beloved franchise.