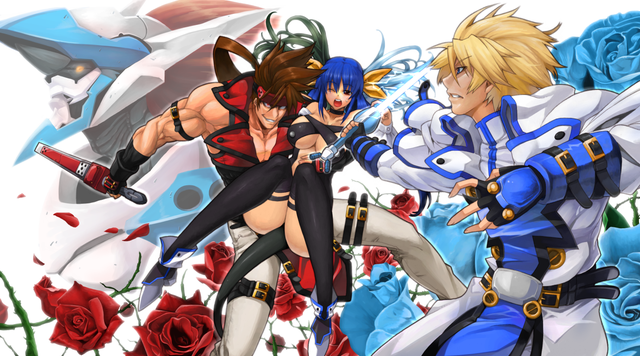 Guilty Gear is one of those franchises that has never quite earned the attention or praise it so rightfully deserves. While many other games in its genre maintain a rigid adherence to tried and true formulas, Guilty Gear gives a proper middle finger to conventionalities and launches fans into a world ripe with style, sensationalistic mechanics and plenty of hair-slinging metal music. By the by, the series as a whole is a fighting game fan’s dream, and Guilty Gear XX Accent Core Plus specifically holds up under the weight of the reputations from wonderful installments before it. It has some trappings, but it also has the ability to shine with obscure, embroidered wonderment.

Up front, players will immediately notice that Accent Core Plus is a fast, fundamentally deep fighter. Fans of the series, and those who played the game originally on PlayStation 2, will feel right at home with these hardnosed technicalities, since they have defined the franchise from the beginning, and essentially riddle Accent Core right down to its very, well, core. Exact, yet mind-blowingly long-winded input commands are mere commonplace in Accent Core Plus, making this a fighter that requires hours upon countless hours to fully understand, and even more to master. The almost inconceivable amount of depth is impressive, and sometimes overwhelming, but is also the reason why the game has that very specific one-more-time effect on its players. 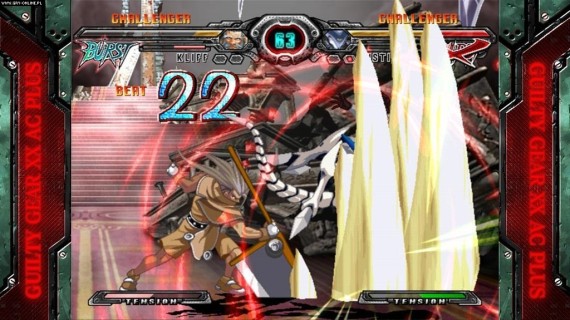 Even with the difficulty comparable to the likes of climbing Mount Everest with only wearing a pair of Happy Feet and rubber-gloves caked in slime, Guilty Gear XX Accent Core Plus is somehow still accessible, and better yet, enjoyable for newcomers. Considering the fact that the basics of the game are actually manageable, Accent Core isn’t off-putting. In fact, it’s only over time that players may begin to see the full breadth of what the game’s fighting engine has to offer. This is excellent for newbies, as they may not be instantly demoralized or exhausted to the point of simply giving up when staring the mechanical complexities in the face. In this delicate balance, developer Arc System Works has bequeathed folks an experience that doesn’t come with a strict set of parameters on who and who can’t have fun with the game.

Being pick-up-and-play is vital to any game that has a multiplayer component. Fortunately, Accent Core Plus offers both online and local head-to-head modes. Alas, due to the poor netcode, taking your skills online is almost pointless. Players will spend much, if not most, of their matches fighting the lag more than their opponent, making for a pretty unpleasant experience. It’s a shame to see such a beautiful fighter lose an integral part of its allure. Compounding the issue is the lack of a replay feature. Fortunately, the local multiplayer goes off without a hitch, and is where most of the competitive fun will take place. And due to the low-barriers to entry, having a few buddies over, who are unfamiliar with the game, for some rounds is actually feasible in Accent Core Plus; an accomplishment not easily attained by many other fighters on the market.

There’s more to Accent Core Plus than just its multiplayer and standard arcade components, though. In fact, the game includes the return of Mission mode, along with several fresh features including new Gallery, Survival and Story modes, the last of which is a continuation of the storyline from the original Guilty Gear XX, and features over 350 different scenarios to see, thanks to a multitude of branching plot paths. Needless to say, there’s plenty to do in Accent Core Plus. 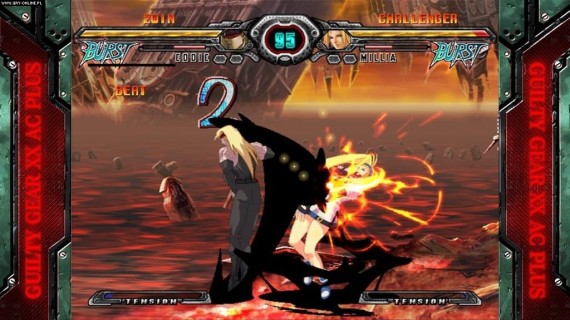 Aside from the rock-solid gameplay and modes, Guilty Gear games have always been gorgeous works of anime art. Character models and backgrounds are hand drawn, and some of the best sprite work in any game cut from this rug. To top it off, animations are bombastic and despite the pleasing visuals, the game’s frame rate rarely hiccups. This all is made infinitely better by a cast of brawlers that look and play diversely. To be honest, part of Guilty Gear’s appeal are the personalities. Arc System Works is known for crafting fighters with wonderful characters, but that trend came into existence thanks to GG. In Accent Core Plus, Arc’s work is at its pinnacle; there’s no better way to describe the roster than simply bad ass. From the fighters’ designs, to the way each one animates and maintains their own unique sense of style, Accent Core’s character gallery is at the top of the class.

On the topic of quality production design, every Guilty Gear game, including Accent Core Plus, features a wicked soundtrack wrought with some of the most head-banging metal around. Rocking ballads with wailing guitars and pounding drums fit the bill, and make each fight feel all the more intense and adrenaline rush-provoking. The awesomely perfect mashup of over-the-top anime with hair-whipping metal makes for a true, one-of-a-kind experience that really isn’t available in most other fighters.

So while the production values are generally off the chart, this is still a remake of an older game. It’s an HD remake, but not a new game built for the consoles it’s appearing on now, and as such, can look a bit dated. Even though the art direction has stood the test of time, when one compares Accent Core Plus to something like Persona 4 Arena, it’s obvious that there’s a generational difference in what tech was used to create the game. Aside from some of Accent Core’s original vibrancy being lost to time and tech, what will also be noticeable right away is the game’s use of a 4:3 aspect ratio. It would seem that using this proportion was unavoidable, most certainly to maintain the title’s original gameplay, but it’s no less an eyesore. 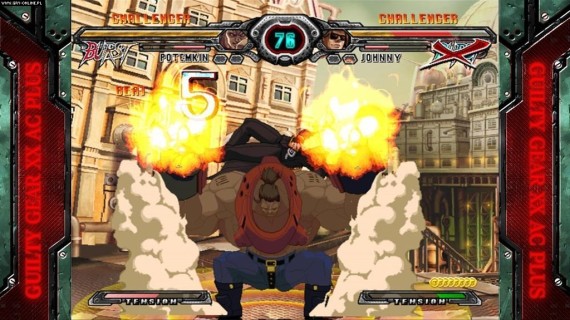 Those who experienced Guilty Gear XX Accent Core first on the PlayStation 2 back in 2009 will feel right at home with Plus, as it looks and feels the same — which is both a positive and a negative. Overall, though, the transition to this console generation has been kind to Accent Core Plus, with astoundingly deep mechanics that still play impeccably in the year 2013. Combining Guilty Gear’s distinct anime art style, delightful cast of characters, face-punching metal-infused soundtrack and decadent fighting mechanics makes for one hell of a time.