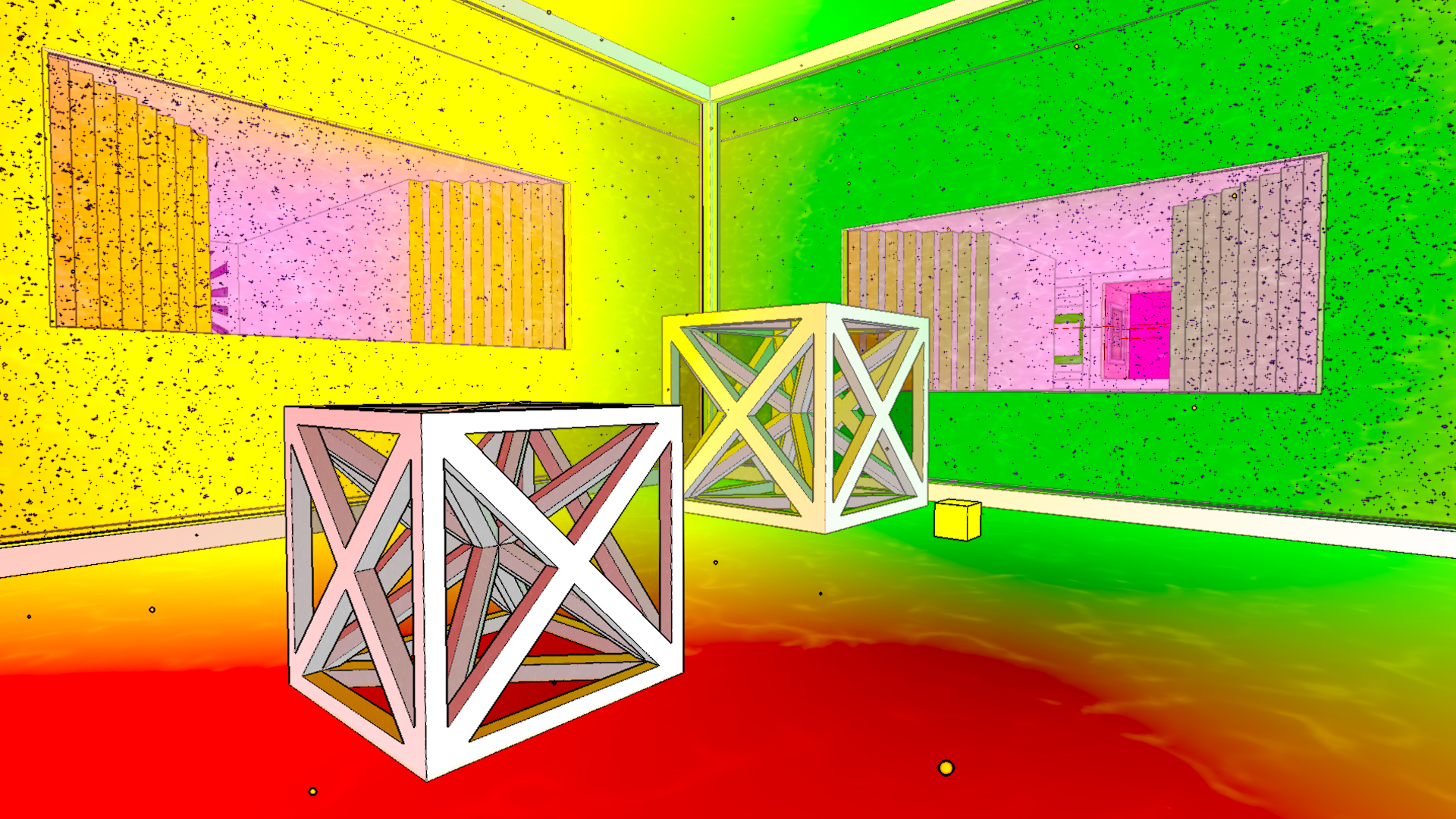 There are things we take for granted in the real world that don’t necessarily need to show up in a video game. Not the obvious gameplay concessions, like being able to take a couple bullets and heal fully in under a minute, or being able to shoot with pinpoint accuracy a target hundreds of feet away, but rather more basic details. Like walking down a corridor and knowing you can walk back and end up where you started, or walking forward leading you to the same spot as walking backwards would. Antichamber doesn’t care much for ideas like logical internal consistency based on an assumption of how things should be, and delights in subverting expectations whenever possible. Sometimes it’s integral to puzzle design and others just for the fun of it, but there’s always a clever set-piece to uncover if only you can turn your brain sideways.

Antichamber is a game presented in a stark, mostly white maze littered with puzzle rooms. There’s possibly a story in there somewhere, although I wasn’t able to find it, but the lure of the next puzzle, the newest bit of physics-defying design, and sometimes even earning a new ability are more than enough to keep pulling you along.

Puzzles are roughly divided into two types. The first kind is environmental, and these are the ones where the laws of the physical world are played with. Pathways can appear or disappear, although with strict rules governing what causes this. Other times the corridor will connect back to its beginning in a way that would give a cartographer a nervous breakdown, but it does this in a way that’s internally consistent. It may feel like trial and error at times, but once you’ve discovered the solution to a puzzle, or the correct path, there’s always a way to look back and understand how Antichamber was trying to tell you what to do. Observation and experimentation will lead to success every single time.

The second type of puzzle involves playing with the block gun, and these are more traditionally logical. You might have to place a block to break a light beam to open a door, or place a block in the door to hold it open. The block gun can retrieve and replace the colored cubes found in many rooms, and as Antichamber progresses it gets upgraded with new abilities. What this means from a puzzle perspective is that there’s a bit of Metroidvania going on, and sometimes it will take a large amount of experimentation to learn that, yes, you needed the yellow gun upgrade and not the green one to get past a section. Each upgrade enhances and replaces the old one, thankfully, so there’s no need to be switching tools back and forth. On the other hand, they don’t come with instructions, so figuring out the full range of possibilities in each upgrade involves learning through experience.

The important thing to keep in mind, though, is that Antichamber wants to teach you how to solve its puzzles. One technique leads to another, and if you pay attention to what the world is trying to tell you then it’s going to be a lot easier to get through. Rarely easy, of course, but the experience of learning is going to lead directly to the experience of feeling really smart and clever. Until the next new wrinkle is introduced, of course, at which point it’s time to start banging your head against the wall again until a solution rattles free.

Usually something will turn up to point the way, but not always, at which point it’s best to walk away and let a puzzle simmer in the back of your head for an hour or eight. Antichamber is the kind of game where, even when you’re not playing, your brain is nibbling away at a sticking point while you go about your business. Even if you’re stuck, though, there’s usually something else to try. The central room of the game has a map on one wall, and retreating to the room is as simple as hitting the ESC key. The last room you were in is highlighted on the map with an icon, but you can mouse over any room you’ve been to and instantly teleport there with a single click. What this means in practical terms is that there’s no Game Over. There’s only a lack of success, and that can be fixed by failing less.

Antichamber is loaded with puzzles that teach you its rules and then get progressively trickier, but never unfair. It feels great to solve a puzzle, and even better when the solution is honestly learned through experimentation and observation. The environmental and block puzzles are evenly distributed, for the most part, keeping both styles fresh even during multi-hour play sessions. There’s no narrative to speak of, and the final area exists without explanation, but the slow drip of satisfaction caused by solving one problem after another does a better job of moving the game along than any story could hope to. Antichamber is a giant, brilliant, stripped-down shot of pure mental exercise, delivered with a stark but colorful style and wrapped in an accessible FPS shell. Check it out, and make your brain happy and strong.