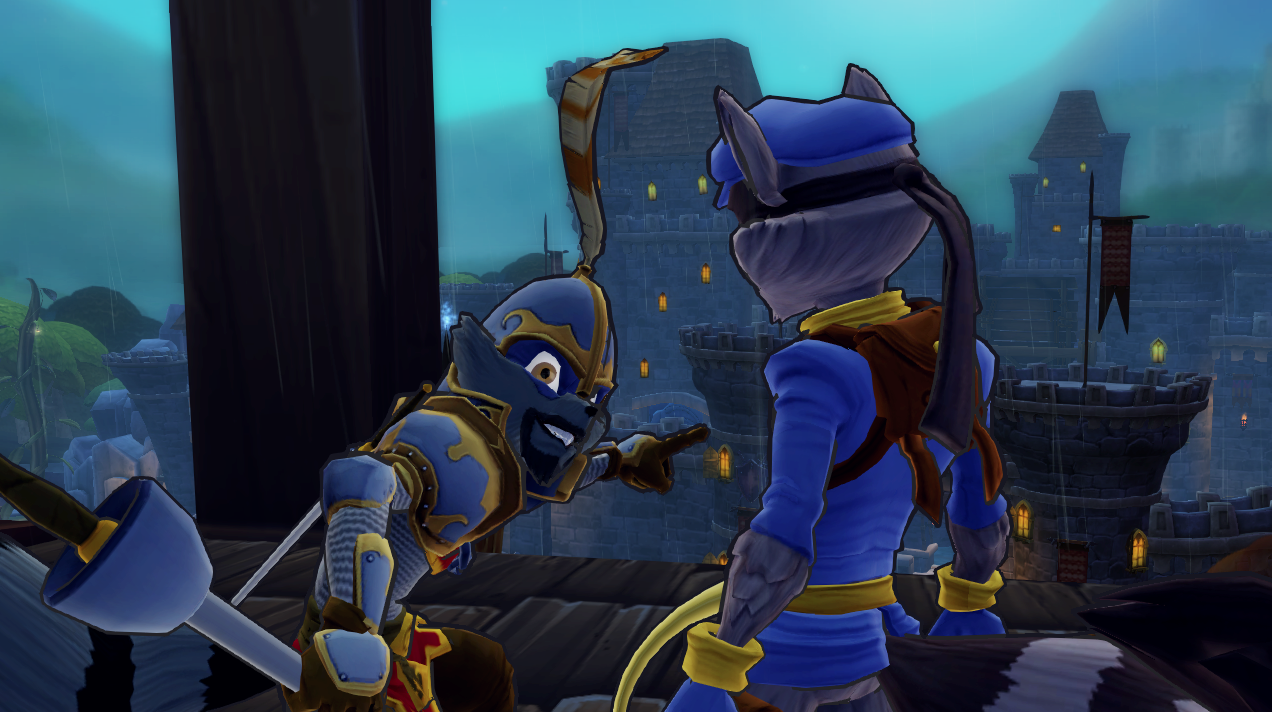 As cute and bandit-looking as they may be, being devoid of raccoons for eight years is generally considered a good thing. When coons fight crime, steal artifacts and beat up miscreants with a cane, however, their absence is deeply felt. While Sly Cooper had a modern-day resurgence with the excellent HD collection in 2010, it’s been too long since we’ve been treated to a proper adventure. In that time, many fine anthropomorphic characters have come and gone, but none as irresistible as our little thievius raccoon. Luckily our patience has been rewarded with Sly Cooper: Thieves in Time carrying a discounted launch price and Cross-Buy support, granting purchasers of the PS3 version a free copy of it for PS Vita. Unfortunately, as Family Guy and Futurama have proven, an extended absence can be devastating for a franchise upon return. Nevertheless, Sly will attempt to steal our hearts all over again.

Thieves in Time picks up where Sly 3 left off (after a quick refresher), with the gang soon reunited to stop the Thievius Raccoonus, a book chronicling the Cooper family history, from being stolen and altering Sly’s history. To do this, Bentley has invented a time traveling van to go back to various periods in history (which first requires a corresponding artifact to be found) and recruit Sly’s family for help. This takes the gang through multiple environments including Feudal Japan, the Wild West, Medieval England and more. Along the way, Sly’s ancestors are recruited for help and range from a noble ninja named Riochi to a brave knight known as Sir Galleth. Throughout the adventure, Carmelita is hot on Sly’s heels and determined to finally capture or fall in love with him — whatever mood should strike. An abundance of voiced dialogue and beautiful cartoon cutscenes are provided throughout the adventure to move the story along, both of which boast some genuinely funny quips.

Gameplay largely remains the same as previous entries in the series, with action switching between Sly (the sneaky one), the hippo Murray (the muscle) and the box turtle Bentley (the brains). While gameplay differs between the three, it’s close enough to prevent jarring tonal shifts. One of Sly’s strong suits has always been its ability to seamlessly mix stealth, platforming and action gameplay, which is perfectly preserved here. One moment you’ll be sneaking past or pickpocketing the guard and the next doing a bellyflop on top of them as a hippo. It’s a throwback to some of the great platformers of the early aughts and is never a bore. Not hurting matters is the fact that Thieves in Time takes place in some of the largest environments ever to grace a Sly game, full of collectibles to spend hours hunting for. 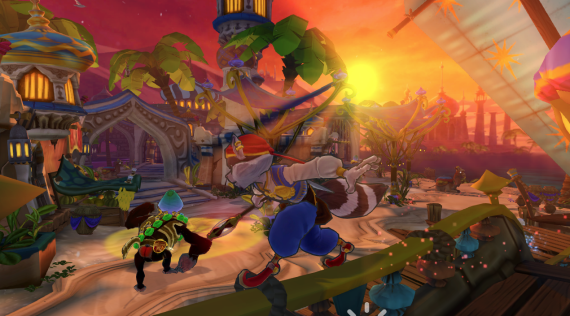 Besides the tried and true gameplay elements, Thieves in Time introduces a few new features of its own — proof that you can teach an old raccoon new tricks. The most notable of these additions is the ability for Sly to change into costume at the click of the L2 button, allowing him to rock looks like Robin Hood, a pirate and more at any point during a level. More than just a simple comedic effect, costumes grant new abilities that must be utilized in order to complete a level. After unlocking a costume in a later level, it can be used while revisiting an early one to reach previously inaccessible areas. These are no mere afterthought and are almost always a blast to use. A standout is the samurai armor, which allows Sly to masquerade as a general and clumsily clank around an environment. When the boar-like guards in the Fedual Japan level spot him, they humorously salute him as their commander. It’s subtle humor like this that renders affairs so enjoyable.

Besides core gameplay elements, there are various mini games abound that are generally a joy to play and help keep things fresh. As Thieves in Time is one of the first titles to feature Cross-Buy, many of these mini games are designed to utilize the PS Vita’s motion sensor, but work just as well with the Dualshock 3’s analog sticks or tilt-control. Like previous games, there’s a series of diverting hacking games that generally take the form of some sort of shooter, ranging from top-down third person to a side-scrolling shoot ‘em up. A highlight is a sort of Irritating Stick homage where a puck must be guided through a maze-like environment before time expires. One of the most amusing mini games in context to the main story has Murray fittingly botching a mission only to end up dressed as a geisha, where he must entertain the troops to remain undetected. The game then shifts to a rhythm game where buttons are pressed to match an on screen prompt, allowing Murray’s fan dance to continue as the guards leer and throw money and roses onto the stage.

After three commendable HD ports, Sanzaru Games has done a perfect job capturing the essence of Sucker Punch’s original trilogy. Sly Cooper: Thieves in Time features not only the addictive gameplay the series is known for, but the humorous and charming tone it’s loved for. The entire adventure is breezy, innocent fun that will prove nostalgic for fans of tight late nineties/early aughts platforming. Large worlds, multiple playable characters and an abundance of mini games and collectibles add up to a worthy entry in the genre, but considering its low price point and near-seamless Cross-Buy functionality, it’s a must-own for anybody who owns both consoles and has the good taste to once again enjoy a delightful, pulpy romp with the world’s most endearing raccoon.