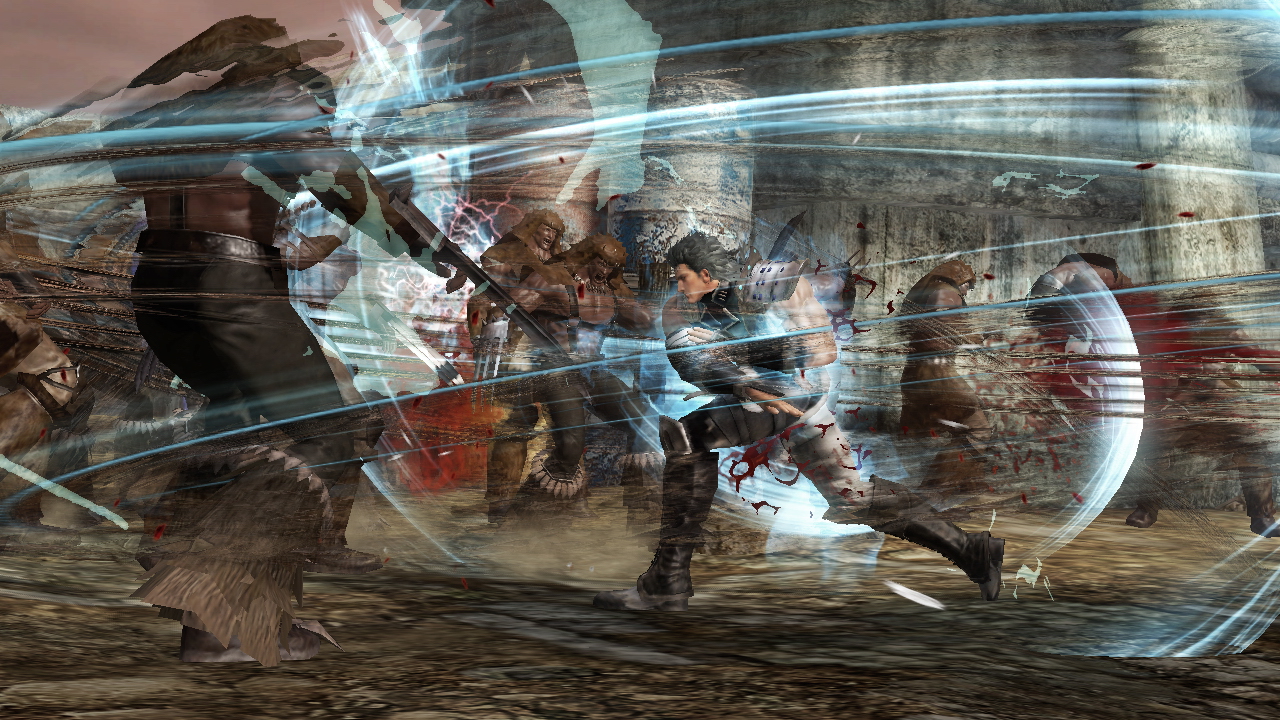 Fist of the North Star: Ken’s Rage 2 is on one hand a refinement of the 2010 original title, and on the other, a step backwards. Given the first game’s subpar mechanics and overall presentation, however, neither is the best indication for the quality of the sequel. Having said that, in Ken’s Rage 2, players will find three truths to consider: there are more bad guys to kill, more heads to explode and all around more ass-kicking to the sounds of thrashing metal guitars to be done. But when all this occurs within a confining framework, shoddy mechanics and production values, Ken’s Rage 2 becomes a game that is truly difficult to enjoy, and even harder to like.

Initially, Ken’s Rage 2 seems like it will be a pretty solid brawler. The interface is clean, the story is intriguing and the game’s protagonist is a bit of what one might call a bad ass. But then players have to actually play the game — and this is where it all gets a bit ugly — literally. Right off the bat, one might recognize that Ken’s Rage 2 looks infinitely better than the first Fist of the North Star game from a few years back. Character models are more detailed, environments aren’t as drab and animations are rather fluid. However, just comparing the game to its predecessor would be short-sighted, because by today’s standards, Ken’s Rage 2 is pretty awful looking.

It’s as if one is seeing the entire game through a low-resolution lens. The game’s textures will immediately make players cringe and have them asking themselves if they’re playing a game from 2006, or if they’re playing a game that’s been released right at the end of the current generation’s life cycle when graphics are theoretically meant to be at their apex. After questioning whether or not there’s some kind of aesthetic trickery happening, one will then notice the stuttering that takes place within the first two minutes of the opening level. And then a cutscene happens, and character models are observed up close, with the camera revealing more than Koei should’ve ever wanted people to see of their rather primitive, embarrassingly polygonal character models. This, coupled with some genuinely horrendous texturing, makes Ken’s Rage 2 an absolute eyesore. 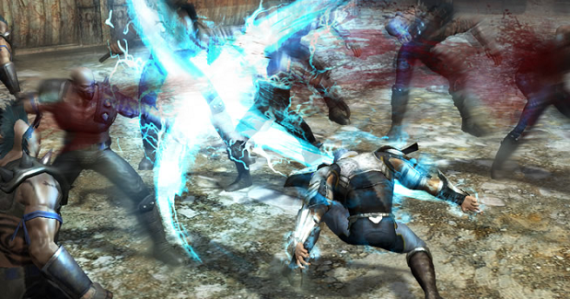 But, a game should not be condemned just because it’s been built with antiquated technology. After all, gameplay is what matters most. In this area, Ken’s Rage 2 simultaneously exceeds its predecessor, and unfortunately regresses. For starters, series vets will notice that there are more baddies on the screen at once than there were in the first game. This is great in that it gives players a chance to unleash Kenshiro’s wicked attacks that reinforce the notion that he’s not a man to be messed with. This too does wonders for the game’s pacing and makes stages zip by, as players race from one set to the next, looking to divvy out the next helping of face-punching deliciousness. There are no more screen-clearing specials either, which is conducive to the faster-paced nature of Ken’s Rage 2, as well.

Helping the game’s speed, players are regularly thrust into combat with sometimes 30 or 40 enemies to take on at one time. With regular and strong attacks at the ready, they can string together combos to dish out the pain in rapid succession, and with a particular degree of captivating flashiness. But anything interesting and flashy can quickly fade. This is how players will spend the bulk of their time: kill an exorbitantly large amount of bad guys, move onto the next group, save some villagers, fight an underwhelming mid-stage boss… rinse, repeat until the final boss appears. This is how the entire game unfolds, which is should fine, because after all this is a beat ‘em up; Dynasty Warriors has been doing this formula with a certain level of success for over a decade. But unfortunately, this isn’t Dynasty Warriors.

Ken’s Rage 2 feels extremely limiting in what it offers in combat. Yes, players can blend together different attack types for some bone-crushing combinations, but there are such a finite number of them that they’re all seen or handed out in the matter of minutes. After that, it’s all about just using the same ones over and over to the point that button-mashing becomes a totally viable option to reach the end credits. There are some charge attacks, special attacks and throws for good measure, but again, even those are painfully constrained and not all that practical when surrounded by a horde of blood-thirsty foes. It all gets mundane enough that Ken’s Rage 2 ultimately turns into a nasty war of attrition — how long can players put up with the seeing the same stuff over and over until they just quit.

And make no mistake, players will see plenty of the same stuff time and time again. Environments all look the same, and are covered in a disgusting color palette of browns and greens. While this is a story about post-apocalyptic survival, it wouldn’t have killed the developers to offer a little bit of visual variety to keep players from wanting to play the game through a makeshift kaleidoscope just to get some variation. To make matters worse, the same enemy models litter the whole campaign. I couldn’t tell you how many times I fought an enemy who wore a mask and carried the same kind of improvised melee weapon. I seriously bet I killed thousands of them. If one can manage to destroy your morale and perseverance, then the game’s extreme linearity will; there are hardly any open environments in which to fight, so players will essentially be ushered from one outdoor corridor to the next, only able to notice their chronological progress by the map that displays explored and unexplored areas in the upper right corner.

The game does have a character development system which is simple but engaging. Throughout each stage, Kenshiro can pick up “scrolls” which are outfitted with specific abilities. At various points in the stage, or between them, players can equip these scrolls to learn new skills. By equipping scrolls that share like-properties, and placing them in a particular order on the character’s loadout screen, they can unlock what are called Nexus skills, super powerful abilities that lend themselves in some manner to combat, making laying the smackdown a bit more fulfilling. The system is basic, and actually feels like a step backward in relation to the first game’s more robust character progression mechanics, but it’s solid all the same.

Speaking of what Ken’s Rage 2 does well, it has an online component for up to six players that is actually fairly fun. It ran with minimal lag and was easy to setup, making the co-op gameplay feel rather effortless. This mode alone can’t make up for the fact that, aside from it and the story mode, there’s only one other method of play to found, which is a sort of free-play that allows players to choose any character and beat up all the things to their heart’s content. It was nice having the expansive roster at my fingertips here, but ultimately none of the characters played all that uniquely. Not to mention, no matter who you play, the game’s core mechanics never change, and that’s the real problem. The game tries to make up for this with giving players a heap of unlockables to earn, but this will only really excite hardcore fans.

That being said, Fist of the North Star also has a pretty strong audio component. English vocals didn’t make it in this iteration, like in the original, so purists will enjoy the Japanese-only voice-overs. To accommodate for this decision, the game boasts a fantastic soundtrack that is every bit as 80s metal as one would expect from a manga that is thirty years old. Sticking true to the game’s 80s roots, Ken’s Rage 2 rigidly adheres to the original storyline, and does a nice job of making the game’s narrative components interesting, even for those who have not read the manga or watched the anime. It’s ridiculous, but fantastic, mostly because of how over-the-top everything is.

At the end of the day, whether players enjoy Fist of the North Star: Ken’s Rage 2 will hinge upon their level of fandom of the original manga and anime. For the most devote enthusiast, it does enough to warrant a looksee, if for nothing else than for the sake of sheer nostalgia. For everyone else, however, there just isn’t enough here that’s all that interesting. Ken’s Rage 2 feels like it was developed by Koei’s B-team thanks to performance issues, subpar graphics, a shallow character development system and fighting mechanics that are only as fun as the game’s limited combat engine allows. For the price, there are so many better alternatives out there that it would feel irresponsible of us to recommend this to anyone who’s not a diehard fan.