Long ago in an ancient past when Commodore blessed its followers with the glory of the Amiga, Team 17 released an overhead-view corridor shooter called Alien Breed, and it was good. It was also an art design tweak away from being a direct copyright infringement on the movie Aliens, but media companies tended to be a bit less litigious in the early 90s, so that was ok. There was a space station crawling with almost-H.R. Giger aliens, desperately in need of extermination in a pure arcade style, and the space marines were happy to do the job. 20 years and several sequels later and the original Alien Breed has a shiny new HD update, showing off a style that’s maybe a bit simple by today’s standards, but also the equivalent of video game comfort food.

By “simple” I mean “run through corridors, shoot things, reach objective, race level-destruct timer to exit”. It’s not a complicated game by any stretch of the imagination, nor even particularly difficult. There’s plenty of ammo to go around, and if you run out of keys you can shoot locked doors open. Aliens go down in a couple of hits, and even the boss creatures are big rather than actually dangerous. Death generally comes from carelessness handling enemies, accidentally running through an electric barrier, or not paying attention to the occasional trap hole opening up beneath your feet. Run low on lives and the Store is a pause-button away.

There have only been a few changes to Alien Breed in the updated version, and one of the major ones is the store. Originally it was found at computer consoles scattered throughout the levels, but now it’s accessed by a quick tap of the pause button. You can buy everything from ammo to level maps to lives here, using the cash picked up throughout the labyrinthine levels’ many rooms. Most of the money will be spent on new weapons, though, because while the initial rapid-fire gun is nice enough, it’s hard to understate the joys of a flamethrower or bouncy-laser.

Once you’ve bought a gun, you’ve got it forever. Any purchase you make carries over into all gameplay modes, so if you like scattering missiles down the space station’s corridors you won’t have to keep re-buying that ability. Oddly enough, lives and ammo carry over too, so if you complete a gaming session with a single life left, the next time you start you’ll only have the one available. On the plus side, ammo carrying over between games means you’ll never run out after a couple hours play, easily maxing the ammo clip counter out at 99. This even holds true for the HD and Classic versions of the game.

Alien Breed is divided up in a couple of ways. The default version is an enhanced HD upgrade, with sharp new graphics and a nice twin-stick control method. For purists, however, the original look is available complete with the single-stick method of aiming. Both Enhanced and Classic modes have the full set of levels available, which is divided among the original six-level game, the 12 level Alien Breed Enhanced, and a handful of four to six level expansion packs. It’s a lot of levels to run through, but despite the volume of content, you’ll still be shooting the same three monsters over and over again. 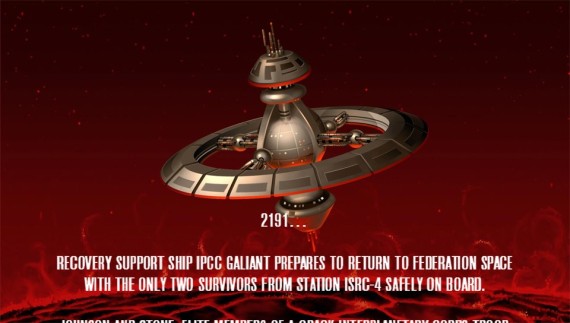 Simple as it may be, Alien Breed isn’t unenjoyable. It’s a bit easy and straightforward, sure, but it’s also a very good update of an Amiga classic. You run through corridors, shoot everything that moves, pick up all the goodies, then make a run for the exit to do it all over again. There’s no denying that Alien Breed is pretty mindless, but sometimes a bit of brain-dead xenomorph extermination is a nice way to kill an hour.