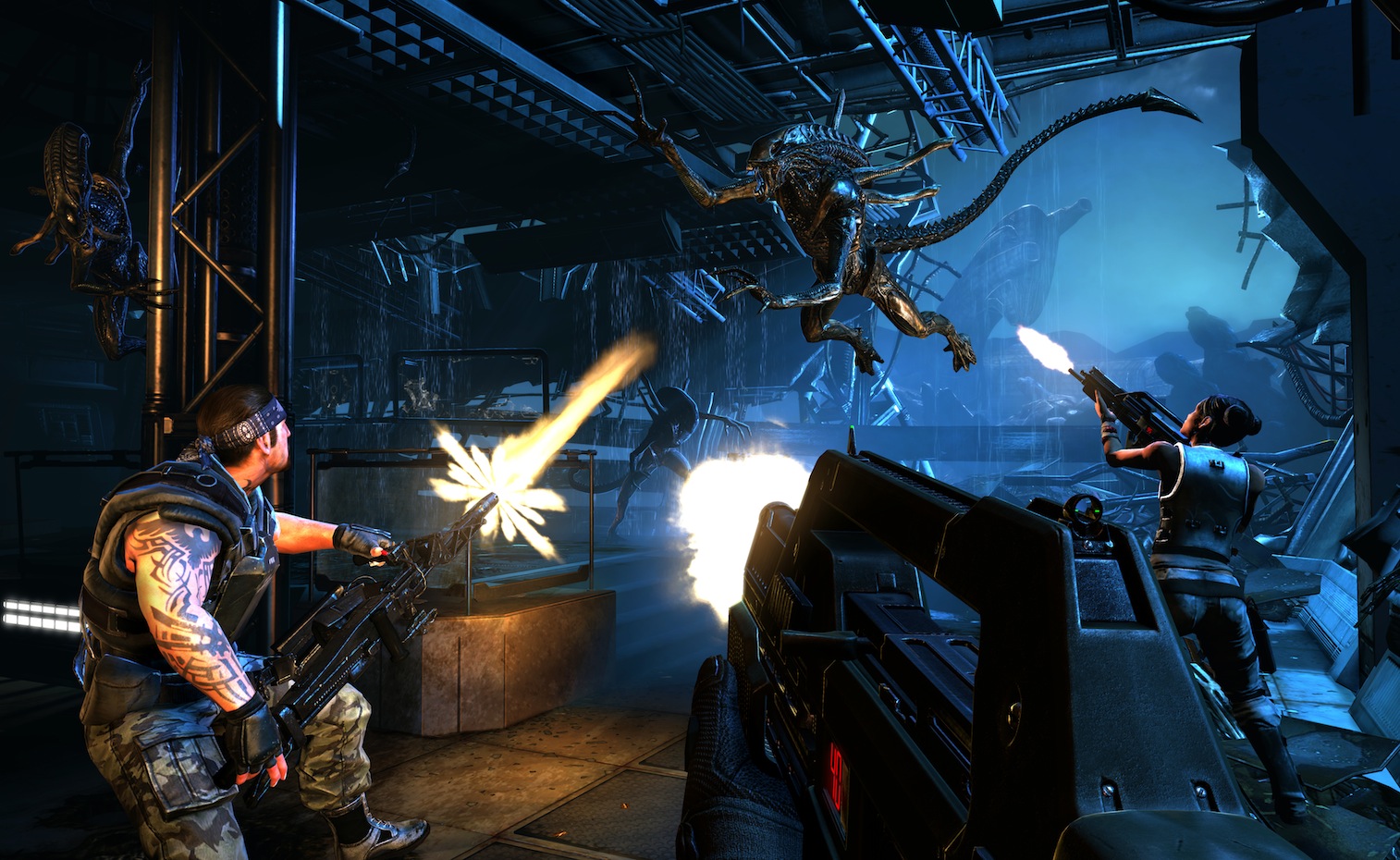 Make no mistake: there’s been a lot of games set in the Alien universe. Whether it’s in the form of the mindless action of multiple arcade shooters or 2011’s impressive handheld sidescroller, there’s no shortage of H.R. Giger’s abhorrent creations in video games. It’s odd then that in over twenty years of Alien video games, there’s never been a stab at an epic AAA title to live up to the sheer cinematic scope of the famous franchise. Sega hopes to belatedly remedy that oversight with Aliens: Colonial Marines. Instead of including some sort of gimmick or throwing in a Predator or two for good measure, Colonial Marines is a straightforward first-person shooter that ties-in with the franchise and attempts to add to the canon itself.

Colonial Marines takes place just months after the events of Aliens, with the marine ship U.S.S. Sephora receiving a distress call from Dwayne Hicks aboard the U.S.S. Sulaco (the machine gun looking ship of the film). The Sephora finds that the Sulaco is not in orbit over Fury-161 as previously thought, but instead over LV-426, the origin of the alien creatures and subsequent colony/battle ground. Players take the role of Corporal Christopher Winter, a colonial marine part of a squad tasked to board the Sulaco, investigate what happened and find any survivors on board. Of course in typical Alien fashion, things don’t go as planned and they soon find themselves under siege from xenomorphs.

The game takes place in multiple famous areas from the film franchise, including the aforementioned Sulaco, LV-426 and the colony on said planet where most of the second film took place, Hadley’s Hope. While all of the environments are well designed and faithful to their filmic counterparts, there is an issue with their repetitiveness throughout the campaign. The first three levels (which is nearly half the game — a problem we’ll address later) take place aboard the Sulaco. While it’s a fantastic setting and idea for an environment, most of it is simply your run-of-the-mill industrial spaceship — a setting that has appeared far too often in first-person shooters — that’s common to get disoriented in because of the similarities of multiple corridors winding through the areas. Backtracking also occurs throughout these levels, which due to the constricting environments, would likely have gone unnoticed if not announced.

Eventually, the squad lands on LV-426, which features some great looking outdoor environments and some excellent recreations of the colony Hadly’s Hope on the planet. There’s some neat references here such as the turrets installed in hallways to fend off against the xenomorph swarm, which must be utilized to protect yourself in the mission. While the environments are a bit bland and repetitive overall, some of that can be attributed to the source material and at least the events that take place in every area feel different. While not scary, the majority of the game is quite tense — much like the film itself. Xenomorphs can pop out of walls and grates at any second, and rapidly run at you while climbing all over the environments. There’s also a fitting sense of hopelessness throughout — you never feel like an action hero — and thankfully little humor or theatrics. The sound design helps add to the intensity, with the constant pitter-patter of monsters skittering around, alarms sounding off in the distance and the ominous bleeps of the motion tracker.

The motion tracker is a great addition to the atmosphere of the game and is also quite helpful if utilized correctly. Pushing the left button brings up the device (and subsequently puts away your gun), which continually scans the environment with a 180 degree cone in front of you. Solid red blips are hostiles, hollow ones are allied units, hexes are objectives and flashing arrows at the bottom of the screen warn of movement from behind. While it would have been nice for the display to be bigger or have an option for full screen, it remains a constant help with navigation and battle planning.

Much like the corridors of the Sulaco itself, combat is quite standard for the genre. Move with the left analog stick, aim with the right, reload with X, crouch with B and melee by pressing the right stick. Take away the Alien assets and you’d be left with a generic first person shooter — but at least one with solid mechanics. Combat feels intuitive and it’s a blast to shoot xenomorphs with multiple weapons at your disposal, including shotguns, machine guns, flamethrowers and plasma rifles. Additionally, legendary weapons — such as Hick’s shotgun — can be found in almost every level which enriches the experience. There are some nagging issues present, however, including the lack of a cover system, having to manually pick-up items (which are frequent enough to make doing so dangerous in combat) and the scope zoom taking up too much of the screen. Still, it’s some of the best mechanics ever to grace a Alien shooter and never makes disposing the creatures harder than it ought to be.

With multiple loadouts accessible at any time during the devastatingly short single player campaign, it seems as if the game was designed first and foremost for multiplayer. Indeed, even on above-average difficulty, the game can be completed in about 5-7 hours and does little to inspire replaying it thanks to repetitive environments and lack of enemy variety. While the xenomorphs make formidable foes, there’s only so many you can shoot before it becomes an exercise in futility. Gearbox (or should we say TimeGate) must have known this so added human PMC soldiers in a misguided attempt to make things more diverse. Shooting emotionless humans has no place in an Alien game and their nearly-unexplained presence (a conspiracy involving Weyland-Yutani) and poor A.I. make you yearn for the fear of when you thought xenomorphs were the only enemy in the game.

As expected, the game does offer a fairly robust multiplayer mode that extends the replay value for those so inclined. Four modes are included: Team Deathmatch, Extermination, Escape and Survivor. Team Deathmach divides players onto a team of xenomorphs or marines and lets them have at it, Extermination is basically capture the flag, Escape has marines trying to escape a linear level as the xenos try to stop them, while Survivor challenges players to survive an onslaught of the aliens for a pre-determined amount of time. All four modes are a lot of fun and while certainly won’t replace late night sessions in Call of Duty or Halo, could prove to be the saving grace of the game should the community embrace it.

The fact that Alien is such a prime candidate for an epic game set in its universe makes attempts like Colonial Marines all the more frustrating. With solid shooting mechanics, well-designed environments and a tense atmosphere, it’s a fine first-person shooter, but its repetitiveness, glitches, substandard graphics and insubstantial story make it a far cry from anything close to matching the prestige of James Cameron’s beloved film.