While Rhythm-based games have long existed, with dancing games like DDR dominating arcades for nearly two decades, it was less than eight years ago that the first “rock-based” one was introduced to the market. I remember it like yesterday; my real-guitar playing friends  heading to Best Buy to strap on a plastic guitar and complaining about how “lame” it was and that it would never catch on with people outside of the Japanese fandom/DDR community. Of course, they were wrong, and many a gamer (and non-gamer) happily plunked down the $69.99 it cost and slapped a bunch of the included gaudy plastic stickers on their new string-less guitar and rocked the night away.

The series proved popular enough to spawn five sequels and gross two billion dollars at retail. In 2009, Activision claimed it to be one of the largest gaming franchises in the world, after only Mario and Madden (little did they know Black Ops was just around the corner). Soon after, it was clear that critical reaction had begun to dwindle. The first game secured a 91 Metascore, but Warriors in Rock netted a abysmal 72. Popular reception had grown negative as well, with Warriors in Rock selling just 86,000 copies its first week, a time-span that the third game managed to move 1.5 million in. The series had grown long in the tooth and was no longer considered a must-buy. As such, Activision shuttered their Gutiar Hero department in 2011, with over fifty employees being laid off at current developer Neversoft (best known for the Tony Hawk), and stated that there wouldn’t be another game in the franchise. 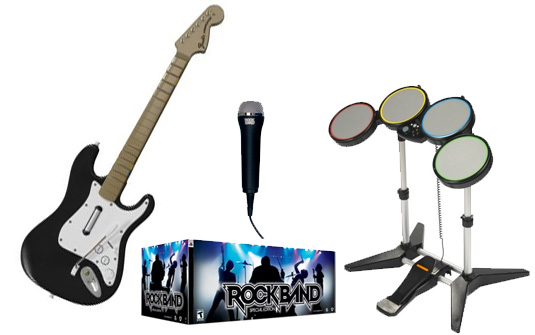 Series creator Harmonix left the property in 2007 to focus on their new series, Rock Band, which proved popular enough upon release to not only rival Guitar Hero, but sell out across the country. Believe it or not, there were people paying over $300 for the set on eBay just weeks after release. Rock Band differed from Guitar Hero in that instead of focusing on only guitars, drums, a bass guitar and microphone were added to fully simulate an entire band. The idea quickly exploded in popularity, with many players forming virtual bands and having regular practice to hone their skills. It was such a phenomenon that local bars even begun to host Rock Band competitions in lieu of karaoke, and saw people taking the concept serious enough to make Facebook pages for their band and coordinate on-stage movements and fashion. The series only grew as it went on, selling 13 units in all, culminating with 2009’s Beatles Rock Band becoming a hot Christmas item for the year. But much like Guitar Hero, the series began to slow down in 2010, with Rock Band 3 (which added a keyboard) coming short of Harmonix’s new franchise, Dance Central. It was the last year we’d see a retail release of the game, with the latest game in the series, Rock Band Blitz, released only on XBLA and PSN and utilizing controller-only controls.

What was one of the largest game genres in in 2006-2009 seemed to instantly implode in 2010 and prove unsuccessful enough to not only scale back releases, but abandon both series altogether. No longer could the publisher’s fetch upwards of $200 for instruments — in fact, they proved so plentiful and undesired that resell shops like GameStop would not even take them for trade-in. To this day, you’d be lucky to get a few bucks for an instrument peripheral on eBay. While there were no more “Rock Band” nights or mentions of the games on wish lists, a faction of the community did remain and continued to play the game regularly. But today the last nail in the coffin was hammered in. 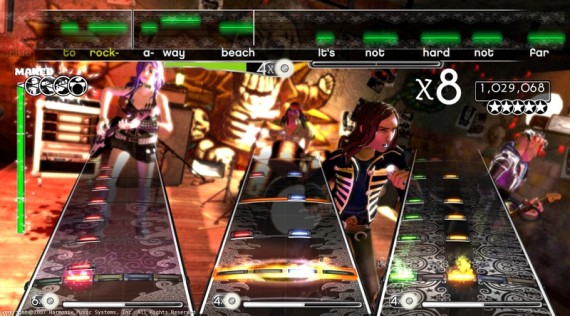 After releasing new songs for Rock Band via DLC for 275 consecutive weeks, releasing over 4,000 songs in all for the game, Harmonix announced today that there would no longer be weekly DLC  after April 2 — and no content whatsoever planned after that date. The move was said have stemmed from the company having several new games in development and simply no time to develop them. But, of course, it was more likely trigged by sales dipping so low that it was no longer financially viable. With this news, it likely marks the end of new Rock Band releases altogether and likely any instrument-based release from the studio.

After five years of releasing rock-based rhythm games and several releasing content for them, they’re finally coming to an end. Once heralded as one of the five must-buy game genres of the generation, they winded up being nothing more than a fad. Much like Pogs, those interested in the series have faded into the sunset, moving on to the next big thing in gaming (Call of Duty, anyone?). Of course, unlike Pogs, there was plenty of merit behind these titles, so it’s sad to see them go. While some may laugh at the series now, the majority of us hold some sort of memory feeling like a rock god grasping that Guitar Hero guitar or Rock Band Microphone. But, alas, the only thing holding those guitars now will be the Rubbermaid containers in our storage closets.