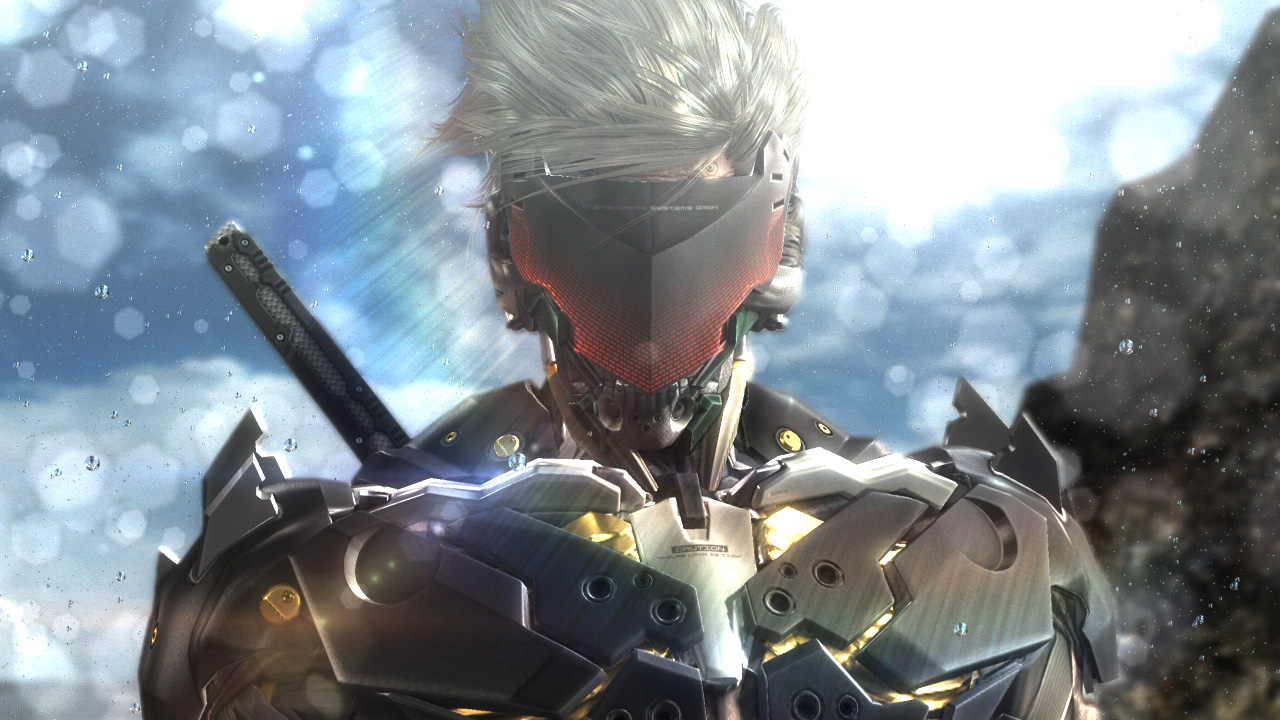 It’s unbelievable that Raiden was considered to be something of a wimp less than five years ago. After debuting in Metal Gear Solid 2, baring all both emotionally and physically (much to the pleasure of many a female gamer and chagrin of many a male), he was considered a far cry from Solid Snake’s macho disposition and take-no-prisoners attitude from the previous games in the series. It wasn’t until 2008 that Mr. Lightning Bolt saw a complete transformation in Metal Gear Solid 4, shifting from a white-haired pretty boy to a sword slinging cyborg ninja. That persona proved to be a universal hit with fans and has been taken a step further with Raiden’s first ever solo-adventure in Metal Gear Rising: Revengeance. There’s no longer time for soul-searching and lengthy self-reflections, instead replaced with non-stop bloodlust, slicing enemies into millions (almost literally) of little pieces at the drop of a dime. It’s Kamiya-meet-Kojima and damn if it’s not a whole lot of fun.

While it’s first and foremost an action game, it’s also a Metal Gear, so to offer anything less than a deep story full of philosophical questions would be a crime. Metal Gear Rising may feature the weirdest story of any game in the series or Platinum Games title — and that’s saying a lot. The game begins with Raiden working for Maverick Security and guarding a convoy escorting the Prime Minister of an African Nation, when suddenly, it comes under attack from members of Desperado Enforcement, LLC. After being severely injured, Raiden and Maverick Security set off to expose and defeat Desperado, which is comprised of Samuel Rodriguez (Raiden’s nemesis) and the “Winds of Destruction”, including Sundowner, Mistral and Monsoon. This soon leads Raiden down a dark path, which not to spoil anything, revolves around organ harvesting and trafficking.

Much of the plot is fleshed out through the always accessible Codec, allowing key members of Maverick Security to be called, including Courtney, Doktor, Boris and Kevin, as well as some new faces later on. New conversations are constantly available, some of which recall a current event and can only be heard for a short period of time, so those who care about story will want to frequently cycle through chats. Besides being crucial to understanding the plot, much of what is on the Codec can be quite emotional or hilarious. As always, you may even learn a fact or two, especially if Doktor is conversed with, who once even has a lengthy discussion about memes and Richard Dawkin’s “The Selfish Gene”.

Metal Gear Rising is not a hard game to learn, but it’s an incredibly difficult one to master. Unlike something like DmC, which uses a seemingly infinite amount of button combinations in combat, Rising keeps it all confined to just a few buttons. When the High-Frequency Blade is your sole weapon, hitting X performs a light attack and hitting Y performs a strong one. Y takes a little longer to execute and recover from and both can be used together to create combos. As the game progresses, secondary weapons can be acquired including a Tactical Sai, Pole-Arm, Pincer Blades and High-Frequency Murasama Blade (which is a crimson-glowing sword with lightning fast quick draw) and assigned to the Y button. The favorite of these is certainly the Pole-Arm, which lets multiple baddies be disposed of in a single swipe. Alternatively, no secondary weapon can be used and attacks can simply be carried out with just the HF Blade.

Instead of grappling or swinging around environments as in a lot of hack ’n’ slash games, almost all navigation is done here by simply holding down the right trigger to activate Ninja Run. While in Ninja Run, obstacles are immediately hopped over and slid under, allowing even the most dangerous areas to be navigated with ease. The mode is even useful in combat, allowing Raiden to deflect bullets with his sword or easily dodge sudden lunges from enemies. While platforming has a place in these types of games, it’s refreshing to experience one that puts combat first. Of course, care must be taken to examine correct routes and look for hidden items, which can be done with an augmented reality display, activated by pressing up on the d-pad. While in AR, the world becomes blue, with enemies highlighted (even through buildings) in orange and item chest locations revealed. To find all of the hidden upgrades and items (which almost has to be done to be successful at the game), this mode must be used frequently. There’s also a few areas that are in complete darkness and require the mode to be used just to see.

The most unique portion of Rising’s gameplay is Blade Mode, allowing for enemies to be sliced and diced in first person at any time by pushing down the left analog stick. While in blade mode, enemies can be cut horizontally by mashing X or vertically with Y. For those who want more control, moving around the right trigger moves the blade in whatever direction the stick is tilted in. While this is rewarding in situations that require ongoing slicing, it’s difficult to make the precise movements sometimes required (especially in a few boss battles), leading to using the less-gratifying X and Y buttons instead. After successfully attacking enemies, fuel cells fill up that will launch a slow motion version of the mode when activated. As almost every enemy in the game is a cyborg, their bodies contain a special muscle fiber full of electrolytes. In this special version of blade mode, slicing a square on an almost-defeated enemy (called “zandatsu”) lets Raiden harvest these electrolytes to fill his fuel cells — represented by ripping out their blue glowing spine. Eventually Ripper Mode is unlocked and trigged by hitting both analog sticks with full fuel cells, significantly increasing the damage dealt and reducing damage taken, and is a tremendous help in areas with multiple strong enemies.

As combat revels in excessiveness (even by Platinum Games standards), it’s surprising that stealth plays as big of a factor as it does here. Almost every area of a level is designed to be snuck through, with enemies not rushing you until they are aware of your presence. Those with a lot of patience can study enemy’s movements (via the AR viewer) and sneak quietly past them, while those who get antsy waiting for a corn dog to heat up can sneak up on enemies and assassinate them (or more realistically just rush into battle) with B from behind or with the same button from above in a move dubbed “Ninja Kill”. Without nooks or crannies to stuff yourself in or tranquilizer rounds to knock out enemies, it certainly doesn’t come close to the Metal Gear Solid experience, but the majority of the game could technically be completed without initiating a battle (although it wouldn’t be much fun). It’s an enjoyable dynamic in a game so combat-heavy that makes Metal Gear Rising feel worthy of its namesake.

Rising features eight levels — including one epilogue and one that’s solely a boss battle. Out of the other six, two are predominantly boss battles and one can be completed in under ten minutes (which involves getting to a motorcycle, a plot point that when taken with level’s brevity seem to hint at a vehicular level that never game to fruition). As such, longevity is certainly an issue in Rising. The levels that are meaty take place in office buildings, sewers and city streets, so unlike something like DmC, the environments take a backseat to the combat and the uninspired level design (with the exception of a haunting power plant area early on) is just an excuse for combat scenarios. Due to the shortage of levels, longevity is artificially extended by the game’s crushing difficulty. While Platinum have made difficult games in the past, they pale in comparison to how brutal Rising can be. After losing an early boss battle against Wolf about eight times, I actually restarted the game just to make sure I was on the “normal” difficulty; I was.

I’m far from terrible at action games. While I’m sure there’s a few hardcore players out there that would (probably illegitimately) sneeze at the difficulty, the majority of gamers will face the same challenges I did, which mainly include replaying boss battles multiple times to memorize their patterns and defeat them. While the difficulty of the affairs, cutscenes and hours of codecs will make a first playthrough over twelve hours (contrary to what the in-game clock may say), take away the story and multiple boss retries, and you’re left with a four to six hour game. The pure bliss of it all makes it easier to swallow, but the game should have been a smidgeon less challenging and a few (creative) levels longer.

Using the “you got chocolate in my peanut butter” methodology, Metal Gear Rising marks the culmination of two great studios finally coming together, and much like Reese’s Peanut Butter Cups, the result is devilishly delicious. Rising represents some of the most fluid and enjoyable combat mechanics to grace a modern action game, presented in a manner so over-the-top that it’s hard not to laugh hysterically at the sheer ridiculousness of the affairs. Featuring a story better than a hack ’n’ slash ought to have, fleshed out with hours of Codec conversations, it wholeheartedly deserves the “Metal Gear” moniker. Even with the game’s brevity and blisteringly difficulty working against it, it remains a respectable entry into both the Kojima Productions and Platinum Games canon, forever rendering Raiden as “Jack the Ripper”.