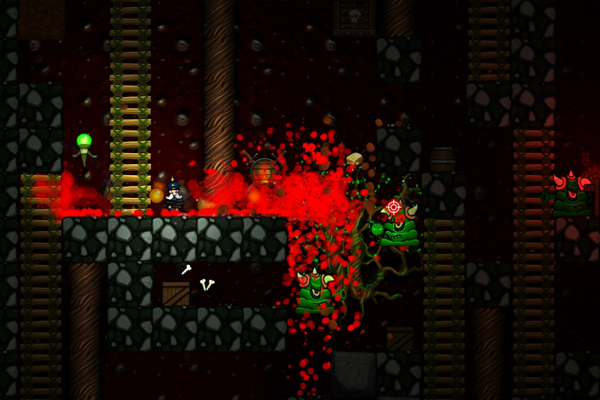 There are certain expectations one would get from a game titled 99 Levels to Hell. Things like the game’s ultimate destination, how many areas you need to clear to reach it, and maybe even the assumption of an overall theme. 99 Levels to Hell delivers on all fronts, but that’s just the start of the depth of content in this cartoonishly bloody, violent, randomized 2D action platformer.

Apparently, you’re stuck at the entrance to hell, and the only way out is through. You play as a mustachioed chap with a shotgun of limited range but decent power, blasting enemies and picking up gold and any other goodies you see along the way. Each level is a free-scrolling affair, randomly generated but with strict parameters that ensure there’s always a path to every part of the map. The basics are simple enough– find key to open exit, blast enemies, pick up gold, escape. Every ten levels there’s a boss fight that, if you win, allows you to skip past it on the next playthrough. Beat the level 10 boss and you can start the next game at level 11, if you don’t mind passing up all the upgrades you might have come across along the way.

The starting shotgun is a good weapon, and it packs a nice punch against the early-game monsters, but it’s not going to stay like that for long. Fortunately there are new weapons to find, as well as permanent power-ups that increase shot size and range, and even level-up items to grant the gun new capabilities. Once you pick up a new weapon the old one and its power-ups are gone, however, so it can be a hard choice when running across something new. Fun as it is to find a gun that shoots bubbles, trapping enemies inside as they bobble to the ceiling, it’s hard to let go of a twin-orb firing staff with bouncing shots.

There are plenty of other random bits scattered through the dungeon as well. Shops sell goodies, slot machines are a great way to lose cash quickly, rare story rooms reveal pieces of the plot, elevators shoot you down several levels in a shot, and various other items do various other things. The fun of discovery keeps the action flowing along, so even when you die and start again (no continues) the repetition is minimal.

Nice as it is to deal with the randomization, though, the real star of the show is the blood-spattered action. 99 Levels to Hell is a fast paced shooter/platformer, and the dungeon’s monsters are numerous and troublesome. They’re also packed with splattery blood that flies everywhere when they’re shot, and when you’ve got a subsection filled with wandering green piles of goo plus flying bats, it’s going to be drenched in red particle effects by the time you’re done. Shooting can be done using either mouse and keyboard or twin-stick controls and ammo is infinite, so there’s no reason not to turn every enemy in the level into a red smear.

There’s enough going on in each level that it can actually take a bit to realize that 99 Levels to Hell has only one notable issue, and that’s a bad case of programmer art. Most enemies float or move with the bare minimum of animation, and while the art is serviceable, that’s the best that can be said. This is a game that needs to be in motion, and fortunately there’s rarely a moment to rest. The dynamic lighting and particle effects do a great job of masking the art issue, on the rare occasion when the game settles down long enough for it to be noticeable. If the action has slowed down long enough to notice, though, that generally means it’s time to head for the level exit.

99 Levels to Hell is all about action, jumping gaps and gunning down hordes of enemies in the finest arcade traditions. The giant strand of Spelunky DNA tying its genetic makeup together covers the random items, events, and level layouts, but it creates its own identity with the fast-paced action. 99 Levels to Hell is a fun and bloody descent into the not-quite-bottomless depths, loaded with replayability and almost impossible to put down until the poor explorer has lost his last heart of health. Another round couldn’t hurt, right?