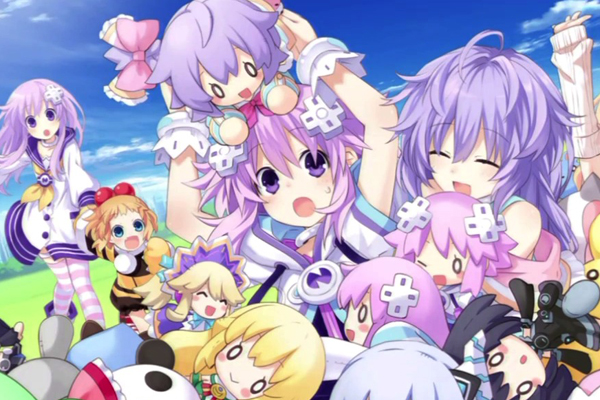 So this is an odd one. Hyperdimension Neptunia Victory is the third game in a series where the video game rivalry between consoles is anthropomorphized into the relationships of a group of underage anime females, constantly squabbling back and forth, but ultimately working towards the continued well being of the land of Gamindustri. It’s everything that’s wrong with Japan’s fandom industry and yet also incredibly likable despite itself. Hyperdimension Neptunia Victory is a paradox, and I’m pretty sure I should feel bad for enjoying it.

Neptune is the CPU of Planeptune, responsible for her land’s well being but far more interested in goofing off. Due to a number of helper systems Planeptune does pretty ok for itself, but Laststation, Leanbox, and Lowee are all doing their best to eat into her country’s market share. One day, while going out on a fetch-quest in order to increase her country’s standing, she gets sent to a parallel world that’s very similar but also very different, allowing all the old characters from the previous games to get a complete makeover and personality adjustment. The threat of the Seven Sages is rising on this new world, and if Neptune can get off her butt and she and her friends stop talking for just a few seconds, maybe the Sages’ plans can be averted. So that’s unlikely.

The experience of Neptunia is divided between two activities- running through dungeons and listening to/reading the characters as they talk and talk and talk some more. While the voice acting is decent and the writing lively, after a while you just want these people to shut up and get to the point. The characters are relatively entertaining in short bursts, but extended dialogue requires more than these two dimensional personalities to keep it interesting. It’s not that the writing, story, and characters aren’t kind of fun, it’s just that they desperately need an editor.

Dungeon crawling fares better, and is actually pretty decent. Neptunia is a bit grind-y, no question, but the combat has plenty of systems and sub-systems to explore. Combat is turn-based, with the good guys starting on one side and bad guys the other, and during each character’s turn they’ve can go anywhere not blocked off by a monster or teammate within their movement range. Weapons have an area of attack, ranging from a single small square for the starting swords and getting bigger as as you upgrade, so with a bit of luck and careful positioning you can rain down the hurt on multiple enemies at a time.

Each character has three attacks to choose from, and you can edit combos to suit your taste. A single attack round has multiple strikes, so you can choose from a heavy hit, a lighter hit that strikes multiple times, or a medium hit that focuses most of its power on the enemy’s guard. Each hit of the multi-strike combo is your choice, and as you level up new and more powerful options become available. The heavy hit earns elemental damage, or the multi-strike gets an extra attack. A grid on the comb screen allows you to edit to taste, and it’s actually pretty straightforward despite sounding complicated.

In addition to the standard hit combo attack, the usual magic skill system is in place, but generally it’s smarter to save those points for the CPU transformation. Each of the girls (they’re young enough that, yes, “girls” is appropriate) has a powered up form that not only wildly increases their stats but also comes equipped for fan-service. Thankfully the tranformation form is late teens rather than normal form’s younger teen look, so the sheer volume of boob on display doesn’t leave you feeling quite so creepily pedo-tastic. The CPU forms are best saved for tough enemies in the dungeon, of which there’s no shortage, but the transformation takes a good number of points from the magic pool. Leveling up refills the magic gauge, though, so there’s no point in being stingy.

There’s more to the combat, of course, as one system after another gets layered on, but the strange thing is that it never feels over-complicated. Many RPGs of this type have the problem of performing a massive info-dump, but Neptunia doles its information out over the course of hours. The plus side is that the lessons have a chance to sink in, while the down side is that you can play for a very long time before all its systems finally open up. Sending villagers out to scout dungeons, assigning characters to support status, questing after giant super-tough monsters, and more show up one by one, adding a lot of life to what are otherwise fairly small dungeon romps.

As developed as the gameplay is, the art side of the equation is hit or miss. Character portraits are the usual high-def 2D images with absolute minimal animation. Special cut-scenes generate a new piece of art that can then be referenced in the viewer back at home base, although maybe the bath scene with three girls who look roughly 13, 13, and 15 is, as previously mentioned, far too high on the pedo scale for comfort. 2D gives way to 3D in the dungeons, and while battles flow smoothly enough, running through the environments is a noticeably low-framerate affair. These are small, uncomplicated areas, and there’s no reason for the 3D engine’s performance.

Despite this, though, Hyperdimension Neptunia Victory somehow comes out as charming and likeable. The graphics engine needs to be put out to pasture, the characters are little more than cliches, the story and everything in it is little more than a long stream of video game references or in-jokes, and the entire setup is a giant attempt at pandering to the gaming nerd stereotype. On paper it’s wrong in far too many ways to count, but in practice it’s actually pretty fun overall. The strong battle system manages to salvage Neptunia’s faults, and once you fall into the game’s tempo, the story is light and fluffy rather than the cliched obnoxiousness it could be. I have to admit that I went in to Hyperdimension Neptunia Victory with gritted teeth and huge reservations, but ended up finding the game a small guilty pleasure.