The original Ninja Gaiden Sigma + worked quite well on the Vita, but was held back a bit by forced touchscreen implementation that hurt the final product (and an absolutely ridiculous name). Fortunately, it still delivered the same classic gameplay that satisfied folks on both the Xbox and PS3. With that game being a recent freebie as part of PS+, Sigma 2 Plus’s release couldn’t have come at a better time. This remake does away with the things that hurt the NG 1 remake (other than the goofy naming scheme), and brings back the bloodshed stripped away from the PS3 version. 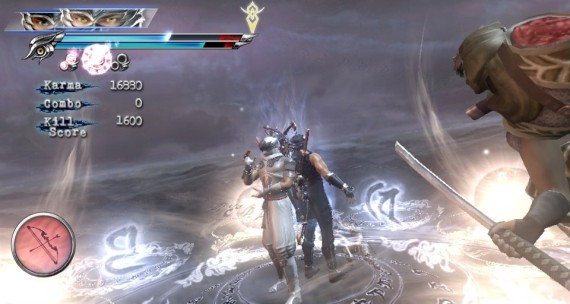 It seems a bit odd to have the definitive PS-system version of a game be on the Vita, but here we are. The Vita’s hardware is tested with this current-gen release and comes through well in most areas. NGS2+ delivers the same “hack dozens of enemies to bits quickly” gameplay as before, with some light puzzle solving thrown in and exploration to find new items. The pace is fast and the game keeps up with it nicely except for when slowdown creeps in every now and then. It’s far from game-breaking, but is a bit disappointing to see it since it wasn’t there in the first Sigma + — perhaps it’s something a patch can remedy. The camera also has the same tendency to get stuck in corners here that it did there and in the console original, which is for more damaging since it leaves you open to attack until you can figure out where you are in relation to the environment and your enemies.

The optional hero mode makes that less of an issue since you’re always kept alive and given copious health pickups, but it’s still quite annoying. That option makes this series far more enjoyable on a portable platform since you don’t have to worry about having to try and beat such a tough game with a lot going on with a small screen to view it on. It takes a lot of the stress and pressure out of the high-difficulty series, and makes it so folks who like action games, but couldn’t quite handle the difficulty can enjoy it. Plus, those desiring a virtual ass-kicking can still get one from the harder difficulty levels making this a change that doesn’t detract from the game at all. No matter which setting you choose, if you love to just slice up enemies, you’ll love this game.

Like with NGS+, it controls very well, but being able to have all-button controls (except the on-screen tap to select the bow and arrow) really helps things out. Aiming arrows is incredibly accurate with the sticks, and having the option to change any axis for the sticks to suit your liking is a nice feature. It helps to keep players within a comfort zone while using the smaller sticks that can take some getting used to using in extended play sessions. Once that happens, you can find yourself spending hours on the game and being amazed at just how much time has passed. The frequent save points also help make this a very portable-friendly experience.

Visually, things hold up about as well as they did in the full console release, outside of the slowdown. The character models all have a nice bit of size to them and don’t appear to have been trimmed down for the portable – this also means that the massive bosses are intact as well, and like the blood and gore, they stick out a bit more on the small screen since they take up so much of in. In the case of the gore, it helps that there aren’t a lot of super-violent games on portables, so when you see one, the effects of the blood on the player are greater. I’d forgotten just how grisly the limb-slicing looked on the 360, and to see it fully replicated here, it actually took a while to get used to again. Character animation is nice and smooth and there are some little touches that are impressive – like bloodshed piling up on  the weapons themselves, and how Ryu just shrugs it all off of the blades if you wait around a few seconds. The game’s audio is also quite impressive, with a feudal Japanese-style soundtrack that goes from subdued and relaxing to really intense when the action heats up. The sound effects for slicing off limbs are quite good, and while the voice acting isn’t the best, it also isn’t kung-fu movie dub bad either. It gets across the storyline well and the cast did a fine job with their performances.

Ninja Gaiden Sigma 2+ is an excellent game that makes the transition to the Vita quite well. As a package, it’s hurt a bit by its high price tag at launch, making it hard to recommend as an instant purchase given that the 360 original looks a little bit better, is more comfortable to control on a full controller and goes for about ten dollars now. That being said, if you adored that game and have done everything there is to do in the original Sigma +, you’ll get the full asking price out of this. If that doesn’t describe you, then feel free to wait for a price drop, or hope that it, like its predecessor, becomes a PS+ freebie at some point.