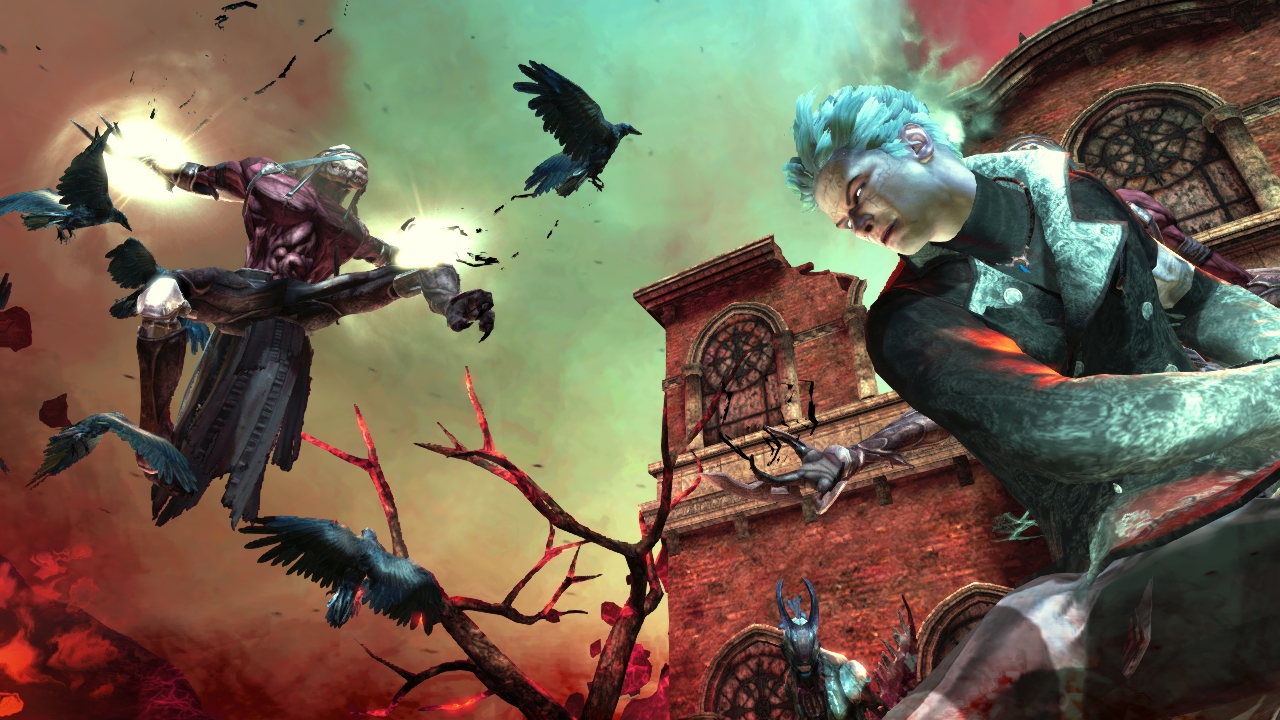 It’s been just shy of two months since DmC was released in what’s shaping up to be one of the best years to date for video games, yet it remains a strong contender for game of the year. The game had to fight against one of harshest (and undeserved) popular pre-reception of any game this generation and managed to overcome it with arguably the strongest experience of the series yet. All things considered, it seems like the perfect time to release an epilogue to remind gamers just why they loved DmC so much in the face of competition from Tomb Raider and Metal Gear Rising. Vergil’s Downfall brings closure to the Nephilim rebel and hopes to get fans primed and excited for the inevitable sequel.

Picking up where DmC left off, a spiritually and mentally drained Vergil wanders into his family home to try to find meaning for his actions. If the previous version of this environment was limbo, this is hell, with disjointed floors and a fiery red tint. Throughout the story, Vergil meets mental projections of people he’s betrayed, loved and hated in a bit of an existential crisis. The story, told through beautiful hand-drawn animation, basically amounts to an internal struggle where Vergil comes face-to-face with his (no pun intended) demons in an attempt to reason his questionable actions and eventually break free from whatever good remained a part of him.

Of course, perhaps the biggest appeal of the DLC is the ability to play as Dante’s fan-favorite brother. While basic gameplay remains the same, there are noticeable differences that make the character feel unique. Unlike DmC, almost every worthwhile ability and attack is instantly available or unlocked soon there after. The sword Yamato and its Angel/Demon mode takes the place of Rebellion and multiple other weapons, while summoned swords (glowing blue swords that shoot out of Vergil) stand in for firearms. There’s even a Devil Trigger mode where holding X makes tons of swords spin around Vergil, causing any surrounding enemy to take severe damage. While it’s commendable to try to differ the experience from playing as Dante, Vergil is simply not as fluid or enjoyable. The lack of swappable weapons makes combat less intuitive, rendering Demon and Angel modes pale imitations of Arbiter or Osiris, and Vergil’s attacks feel slower and harder to properly execute.

Vergil’s Downfall features six new levels to play through, which isn’t bad for an under-ten dollar DLC. Unfortunately, one of those is a boss battle and the final level is a rehash of the first with every ability unlocked. The rest are unique environments, but mainly consist of a bunch of broken platforms or buildings, reusing assets from other DmC levels. Besides the aforementioned mansion, the game also cribs subway cars, hallways and other design flourishes. Making matters worse is the fact that these levels are completely disjointed, with progression occurring by going through a warp door a few times during a level, essentially allowing developers to skirt intelligible level design. Even still, levels aren’t very long, so they’re filled with multiple (difficult) enemies to lengthen the experience. Two new enemies are added, Imprisoner (a giant four-legged beast that runs around throwing objects) and Wisp (a flying demon that can become invisible) that are fine additions, but do little to break up the monotony of gameplay.

More DmC is never a bad thing and Vergil’s Downfall offers its fair share with six levels and over two hours of gameplay, but it pales in comparison to the the main game. What it amounts to is interesting, but not crucial, character development set inside an extension of the most uninspiring portions of DmC. For $8.99, it’s unlikely many will walk away feeling ripped off, but there’s a sense of “meh” clouding the entire experience. DmC fans will get passable enjoyment from the ability to play as Vergil, but besides that, it’s a trivial addition to a compelling game.