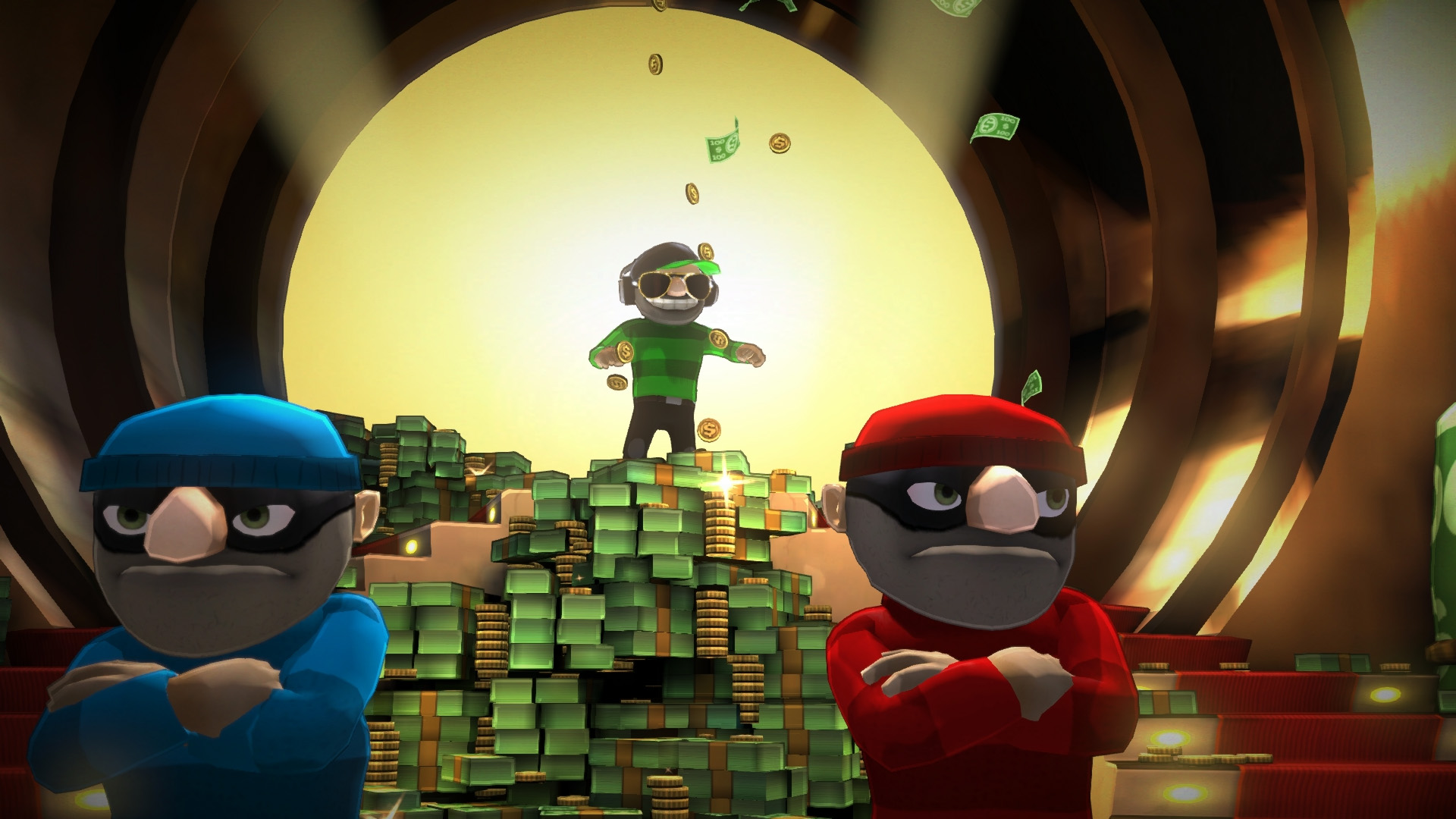 Party games nowadays are pretty much relegated to your Wii Sports or Dance Centrals or whatever else is available to make your friends look like utter fools in front of each other. There was a time, however, when they were designed to involve minimal arm flailing and where the focus was meant to be on quick, fast paced matches entirely designed around having fun. Dollar Dash pretty much epitomizes this style of party game, and is meant to bring together (and then quickly divide and fracture) a large group of friends. Judging from the quote on top of its website, publisher Kalypso sees Dollar Dash as a possible Bomberman killer. Still, despite the fact that Dollar Dash is taking on an opponent that is basically comatose, it doesn’t quite measure up to the legendary series. It ends up feeling less like a Bomberman killer and more like Bomberman’s little brother, trying hard to follow in the footsteps of its idol, but not quite reaching its goal.

Dollar Dash is a top down multiplayer versus game where the focus is on quick, frantic fun. You can play against up to three other people (if you have friends) or AI opponents (if you’re a bitter, lonely misanthrope) and the online mode allows for quick jump-ins or drop-outs that keeps the experience fluid and undisturbed. A variety of weapons and power-ups show up in each map, giving you the option to attack your foes with weapons varying from huge boulders to snow balls to vacuum cleaners. Power-ups might allow you to run faster or turn momentarily invisible to avoid detection and there is actually an impressive variety of weapons and items at your disposal. The maps themselves are well designed with nice diversity, and each requires a different strategy to properly tackle. The shipyard level has destructible bridges that allow you to block the advance of your rival thieves, while the mansion level has several guards that can boot you across the map if they catch you. There are a couple of boring maps that are worth avoiding, but for the most part the map design is really quite strong.

There are three different game modes, although they all use the same basic gameplay. The most enjoyable mode is the titular Dollar Dash, and I’m sure the fact that the game features a mode that has the same name as the game will in no way cause any confusion throughout the course of this review. In Dollar Dash (the mode, not the game), you must collect a set amount of cash and move it to the designated escape vehicle before any of the other thieves can. Prior to safely stashing it away in your escape vehicle, all money that you carry is fair game and can be stolen away by the competing crooks. Hits from enemies cause you to drop cash, and a sufficient number of blows renders you temporarily immobile while your opponents can continue to bonk on your head and drain any cash you have stored. Action is fast-paced and frantic, and you can go from a full bag of cash to penniless faster than a Facebook stock holder. Many a mad dash to the escape vehicle has ended prematurely with a stunned crook and a string of swear words, and even the briefest momentary lapse is enough for victory to be snatched away. Dollar Dash (the mode, not the game) makes the most out of Dollar Dash’s set-up (the game not the mode), offering a unique and fast paced experience that is pretty much the perfect party game.

The other two modes are not nearly as enjoyable, something the developers themselves obviously knew since they named the game Dollar Dash and not Hit’n’Run or Save the Safe. They might as well named it Dollar Dash and Two Other Modes You Probably Won’t Play because that is the only way the title could have been more accurate. Hit’n’Run is a mode focused exclusively on the combat element of the game, and you earn points for each enemy you incapacitate. Unfortunately, the combat itself isn’t particularly enjoyable and is only good enough to serve as an aspect of the gameplay and not the sole focus. It works well enough as a means to obtain and protect your money in Dollar Dash mode, but when it is the only thing to focus on you quickly realize how insubstantial it is. Save the Safe is slightly better, and you must protect and hold a safe from the other three players for as long as you can. Unfortunately, the gameplay is almost too frantic for a capture the flag type mode (which is what this essentially is) and it works even less well when you consider the fact that you don’t have any one else to help you protect the safe. As a result, the safe usually just keeps bouncing back and forth between the players and any semblance of strategy is absent.

Even Dollar Dash, while by far the most enjoyable play mode, has a few flaws that can make things more annoying than they need to be. A majority of the power-ups show up as question marks, meaning you have no idea what you’re grabbing. This wouldn’t be a huge issue, but some power-ups and weapons are significantly overpowered and you won’t know if you’re grabbing one of the useless ones until it’s too late. Furthermore, you can’t even get rid of a weapon or trap until you use up all the ammo, which means that you typically just have to waste it all as quickly as possible if you’re stuck with one of the duds. It would have been better if some button had been allocated to picking up a new weapon or dropping an old one, and things would have been further improved if I knew what weapons I was picking up before I got them. Neither of these are huge issues, but they do end up somewhat souring what is otherwise a really enjoyable experience.

The game does offer a nice degree of customization, and nearly every single aspect of your character is modifiable. After earning enough money, you can unlock various facial features and hats, although honestly once you get the beard you can quit as it is clearly the best choice for facial accessory. The odd assortment of hats and facial features helps reinforce the games odd and zany personality, if the fact that you can throw cacti at your enemies wasn’t enough of a clue for you. You can also unlock other things like taunts and character emblems, and actual useful items like weapon upgrades and ability perks. The weapon upgrade thing is hurt a little bit by the fact that you only occasionally know what weapon you’re picking up and you can only equip one upgrade at a time, but they do come in handy if you’re lucky enough to pick up your favorite item.

Dollar Dash is fun in short doses, but the lack of variety and a couple questionable design choices leave it just short of becoming a true go to title in party scenarios. It’s best experienced in the immediate vicinity of your opponents, as the fast paced, frantic race to stash your cash makes it a great game for quick, intense, trash talk filled matches with friends. It falls just short of its goal of being a Bomberman killer, but just short of Bomberman is still a pretty good place to be, and Dollar Dash is definitely worth looking into.