In “sure to be terrible” gaming news, EchoPeak and 505 Games recently announced Way of the Dogg for release on PS3, Xbox 360, and iOS. And, no, that isn’t a typo on our part. Way of the Dogg is spelled with two g’s not because my g key got stuck or because the writer of the game failed first grade spelling, but  because it is starring the artist formerly known as Snoop Dogg a.k.a Snoop Lion a.k.a. that guy who used to make good music but gave up trying like ten years ago and he failed first grade spelling. Currently, the previews seem to focus on what it is referred to as brutal combat, but the screenshots make it look more like a rhythm game. It definitely has an Elite Beat Agents type of feel to it so far, except upbeat dancing shenanigans are replaced with caving some dude’s face in.

You play as America Jones, a name which sounds like it should belong to a really uncreative undercover spy. America only cares about two things: his woman and the fight. What exactly “the fight” is the game doesn’t really quite say, but I’m currently operating under the assumption that he’s a huge fan of poorly made Playstation Move games. Unfortunately, things go bad even before they finish the preview and something bad happens to the woman we know he loves because of the one picture they show of them riding in the same car together. In fact, a closer look leads me to believe it was because of the fact the were in the same care together that things went bad. 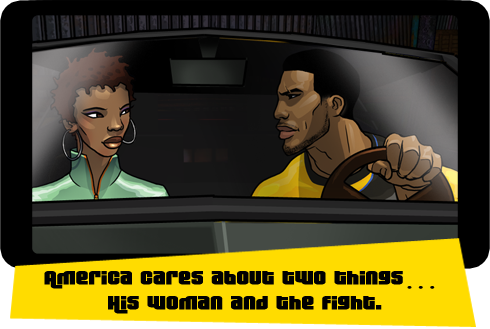 Unfortunately, my initial theory that this would be a game about distracted driving seems unlikely, as America has a need to go out and get revenge for what happened to his lady friend. Luckily, he have a couple of things working in his favor. First, he is the best fighter in the city, which will definitely help if he finds himself in any sort of physical confrontation. And second, he is to be trained by Snoop Dogg, which will definitely help if his opponents attack him with bags of Cheetos or Funyuns. Why the best fighter in the city even needs a trainer is beyond me, but the whole set up provides you with all sorts of burning, unanswered questions. Like, what happened to America’s woman? Who was responsible for the tragic turn of events? How bad is Snoop Dogg hurting for money that he agreed to do this? 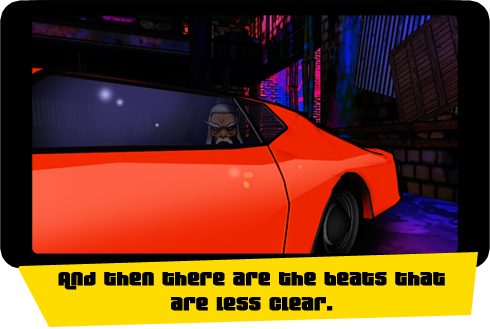 Also, who left grandpa in the car?

Perhaps the biggest question plaguing this game so far is that if you’re trying to find a rapper to serve as a fighting guru in your rhythm/fighting game, how far down the list of possible candidates do you have to go before you decide to give Snoop Dogg/Lion/Antelope a call? Did 50 Cent, Dr. Dre, Eminem, Kendrick Lamar, Drake, Lil Wayne, Lil’ Bow Wow, Lil’ Kim, and Lil Momma all turn you down? Snoop Dogg is over forty years of age and under 80 pounds of weight and hasn’t been culturally relevant for at least ten years. Even before he started approaching retirement, nobody ever looked at him and said, “Yeah, that guy looks like someone who could teach me how to fight.” It is always more along the lines of, “Can somebody get that poor man a sandwich?” Casting Snoop Dogg in a fighting game is like casting Dr. Dre as a surgeon or Soulja Boy as a decent rapper, and he is so hilariously unqualified for this role that I can only assume that he suggested the role himself. There is nobody else on the planet that would look at him and think he’s legitimately threatening. You can no longer pretend to be tough if you were featured in a Katy Perry song wearing a cupcake suit. I’m pretty sure that’s in the Constitution.

Now where did I leave my dignity again?

Gameplay footage is currently essentially non-existent, but what the developers have uploaded is a behind the scenes video documenting Snoop Dogg’s involvement that is every bit as excellent as you might imagine. The footage shows roughly around five seconds of actual gameplay and approximately twice as much time referencing Snoop Dogg’s drug habit. The developers state that he was very professional to work with, but also comment on how much the whole place still stinks. You can actually see smoke wafting up during the segments showing Snoop recording audio, and if this is a professional approach I’d hate to see what the unprofessional approach is, because it most likely involves showing up entirely naked and communicating only in farts. I don’t understand what they are trying to promote with this clip, and it would be like if Naughty Dog (the videogame company, not Snoop Dogg’s latest moniker) uploading a video unveiling Uncharted 4 that just showed Nolan North drinking paint. If you’re trying to make an impression on your target audience you might want to show them something other than the fact your lead voice actor appears genuinely uninterested. They currently seem to be focusing all of their marketing on the fact that Snoop Dogg is in the game, and if that is your main draw then I’m worried about the stuff they aren’t showing. They appear to be developing a game around a musician that isn’t even that big of a draw musically anymore, and I’m assuming the only reason we aren’t going to be playing Way of Flava Flav is because his schedule was too busy.

There is no word on the official release date yet, but whenever it is it comes about ten years too late for anyone to care. Feel free to check out the behind the scenes video below and watch Snoop Dogg curse out the game he’s trying to promote and lazily stumble through his voice acting. My review so far?