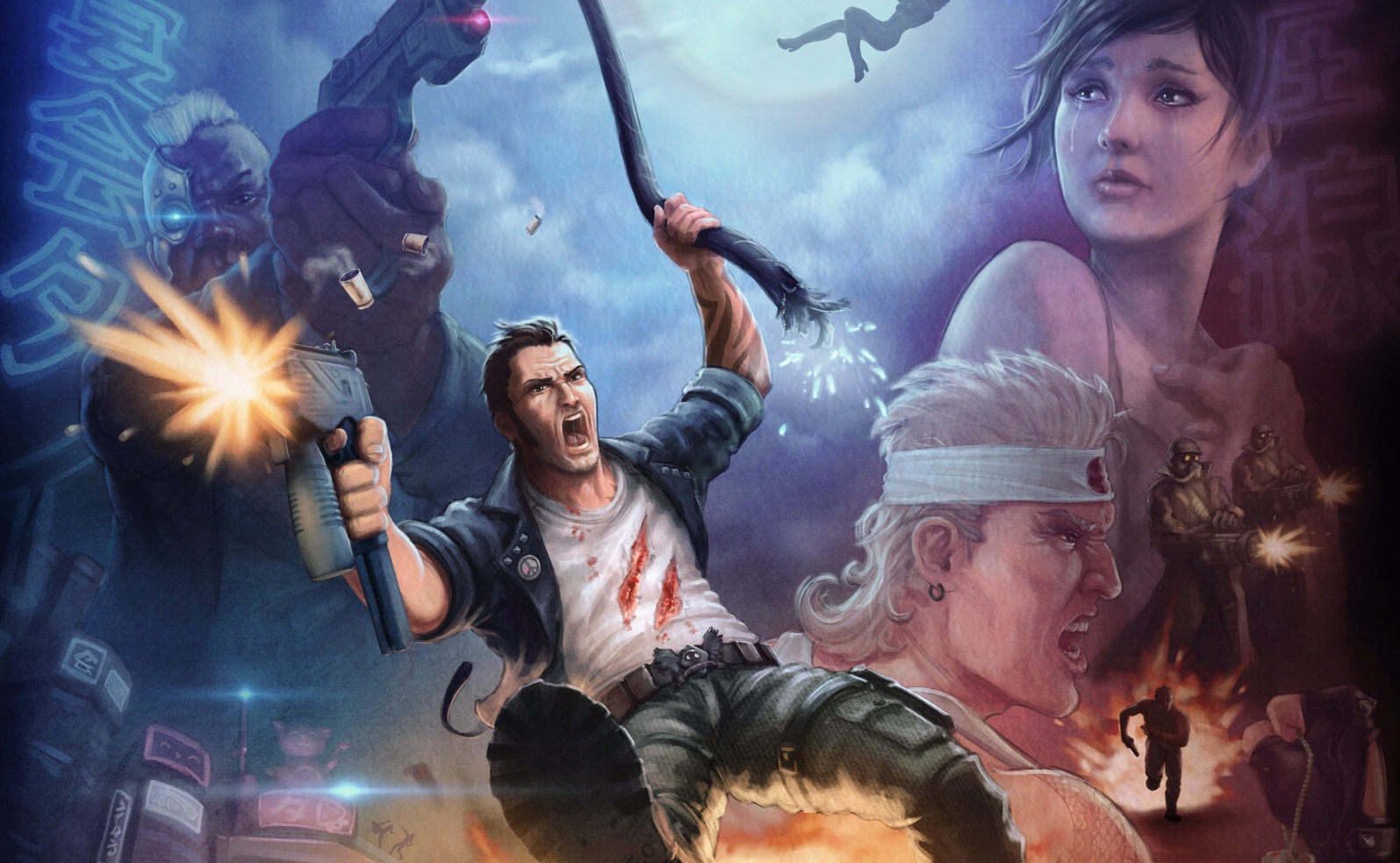 The Showdown Effect from Arrowhead Games Studio and Paradox Interactive is one part Super Smash Bros., one part Die Hard and one part Nightmare on Elm Street. That last bit isn’t meant to be complimentary; rather a depiction of the ghoulish control problems up front and persistently villainous issues surrounding mechanical balancing that will have players shrieking at the horror of it all. Even with these qualms though, the game still manages to be a wacky, multiplayer-driven experience that is a welcome addition to the PC gaming market. Unfortunately, for all its quirks and personality, it never quite captures the magic of the developer’s previous work with Magicka.

The Showdown Effect is a game that does not concern itself with much fluff – as such, there’s no story to make mention of, and the most character development players will find here will be on the loadout screen when they outfit their fighter with various death-dealing weapons and trinkets. Even still, the game does succeed in drawing heavily from 90s multimedia, providing an experience that is clearly nostalgic for big cinema action films the likes of Last Action Hero, Die Hard and any Nic Cage movie, as well as arcade games that cleverly bled our wallets dry of their precious quarters during childhood. This is seen in the personalities and gameplay included which highlight characters that look similar to the stars of those aforementioned films, as well as the hyper-explosive gameplay.

At the start of The Showdown Effect players will see that there aren’t many options of play other than a training and multiplayer mode. Once the training lays out the basics, players are encouraged to dive into fray and take on challengers from all over the globe. Before the action begins, however, there’s an outfitting phase in which players can equip weapons, armor, outfits and special items, all of which are unlocked as the leveling-up process takes place. There aren’t an overwhelming number of unlockables, but there are enough to make players come back round after round.

After choosing one’s loadout, it’s then off to the matches. There are a number of multiplayer modes, but most are vacant outside of deathmatch. With folks seemingly shooting, slashing and exploding the hell out of each other in these every-man-for-themselves bouts, gamers looking for something a bit different in their online brawlers will be saddened at the fact that most other people aren’t. But it makes sense that deathmatch is the mode being played the most – this game was evidently designed around such play. At the beginning of the match, up to eight players are dropped randomly into one of four multi-leveled, 2.5D maps, and the combat commences.

Battling plays out in a Smash Bros. like fashion, giving players a handful of attacks that are contingent on the weapon they brandish. Outside of the firing of machine guns, katana attacks and high-jumping with boost boots, there are also wall-runs and jumps, slides, blocks, dodges, and various other environmental interactions aplenty. Unlike other fighters of its kind, Showdown Effect really encourages players to use their surroundings to their advantage; there are several instances where folks will need some extra padding for an oncoming assault, but due to being out of all other conventional means of defense, will spot a nearby trash can lid and use it as a makeshift shield. This environmental element adds a level of strategy and ingenuity that makes battles unpredictable. And this type of tactic will be used whenever possible, as the name of the game is to rack up the most kills, die the least and reign supreme over all competitors. Needless to say, the gameplay in TSE is fun. It’s also hectic as all get out at times. This is especially true at the end of matches where the game employs a mandatory showdown, or duel, between all the players. This is a sort of last-chance effort for players to take out all rivals to move up on the scoreboard.

Perhaps the most impressive part of The Showdown Effect is how buttery smooth it unfolds; matches go off without any blips, and considering this is a twitch-response type of title, that sort of thing is needed. There wasn’t much noticeable online lag either. So in these regards, the game is a wild success. What’s not so positive are the controls, which seem to dispute the previous few sentences in terms of making the game a sleek experience. Up front, they will confuse and get players killed on more than a few occasions. With some time and practice, they become more manageable, but until then, it’s a frustrating and bumpy ride.

What’s also not so great are the balancing issues. Since this is a game that is played strictly online (there’s no single player to speak of, other than the training mode), it’s important that weapons and items feel equal and well-adjusted. Unfortunately, that’s just not the case here. There are certain weapons that are obviously better than their lower-tiered counterparts. This means that newcomers are likely to get destroyed upon firing up the game and going against some of the higher-leveled players. This is such a problem that I foresee some gamers just giving up because of it and its morale-crushing ways. It’s unacceptable for a game such as this, where the backbone and sole experience is its gameplay, to have that kind of issue; The Showdown Effect simply needed more time in the oven to fully cook and be done.

There is a problem with The Showdown Effect’s depth, too. Some players will be able to gloss over this considering these types of games aren’t meant to be nuanced like a traditional fighting game, a la Street Fighter. After all, Super Smash Bros. has been a franchise built upon the idea of accessibility, further padded by a lovable cast, certain amount of complexity that isn’t readily seen on the surface or even needed to fully enjoy. The Showdown Effect doesn’t possess a cast of memorable personalities, nor does it ever reach that level where the game feels easy to play, but difficult to master – no, it’s both easy to play and easy to master merely because what players see and perform in the first 20 minutes is all they’ll ever need to see and pull off.

To make up for just the all-around lack of options, though, the game has a built in TwitchTV app, which allows players to quickly make an account and then immediately start recording and uploading their gaming sessions. This worked super fluidly and was anything but a hassle. With the rise of e-sports, it’s our hope that other developers take note of how well-executed this feature is in The Showdown Effect. Actually, overall the whole game feels extremely streamlined and mostly bug-free, something of an accomplishment for a Paradox game. The interface is clean and easy to navigate on top of that, thanks to its minimalistic approach.

The title rocks some solid visuals and sound to boot. Though much like the entire design of the game, specifically the previously mentioned HUD, it’s minimalistic. Sure, explosions and special effects look very nice, as well as characters and their silky animations, but they’re not going to blow up any skirts. The audio department follows the same path of giving players enough to chew on, but nothing that is over-the-top or overtly compelling. The graphics and sound feel more like just being kind of there, but for a game that is very much so about the gameplay, that theory and application makes sense.

In the end, The Showdown Effect tries hard to be a likable game, and while there are parts that are enjoyable, the important elements aren’t. Instead, they seem underdeveloped and simply in need of more time to be fully fleshed out. That’s not to say the game is bad, because it hardly is. It’s cheap, clocking in at under ten bones, and is a multiplayer-driven experience with solid core gameplay that is fun and addicting — the type of title that will devilishly lure players in for just a few minutes and not let them go for a few hours. All of that is contingent upon a few factors however, most notably is the player’s commitment to getting better and putting up with its cut-throat challenge. After all, given the balancing issues, the game and its dedicated fanbase will chew up and spit out newbies without hesitation. There are nice customization options and the game has some personality, but even still, these concepts don’t feel fully realized. That’s the main and final problem with The Showdown Effect: it tries hard to be something folks want, but it comes up short, and needed to try a little harder.