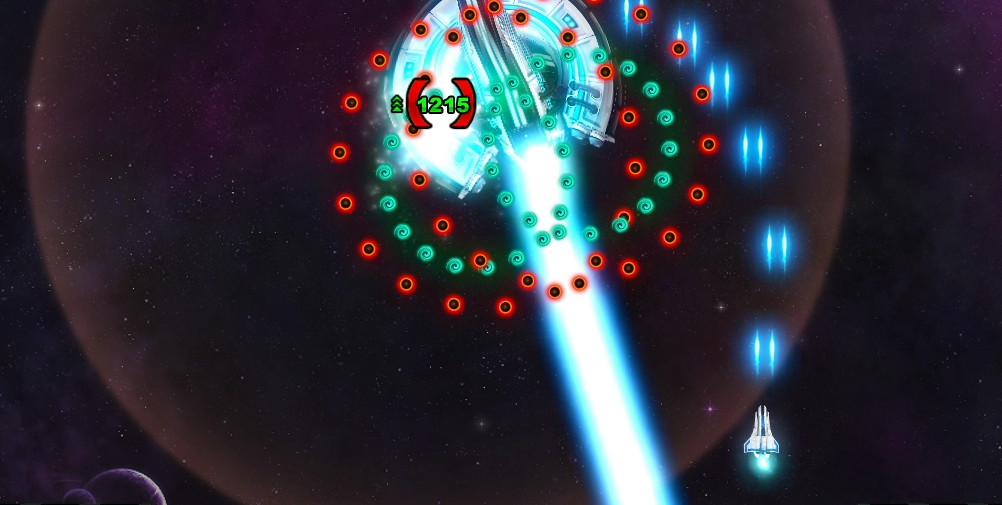 It’s a well-known fact that integrating music into anything makes it better. Panzer Dragoon plus music gets you Rez, platformer plus music equals Runner 2 and Harmoknight, etc. Arcade shooter plus music sounds like a great plan on the face of it, but Rhythm Destruction isn’t quite the smooth fusing of genres that it should be.

The basic plan of the game is, like most shooters, to fly up the screen and destroy everything, or at least as much as possible. A techno soundtrack infuses plenty of energy into the alien-blasting action, and colorful bursts of enemy firepower light up the levels. Sound and vision are quite good (minus a couple iffy songs where the vocals left me cold) but the music rhythm and arcade shooting don’t quite manage to merge properly.

You fly up the screen as usual, with enemies coming from all directions, but you can’t shoot at them until the beat allows it. An icon corresponding to the gamepad’s face buttons appears around an enemy while a circle slowly closes in, providing timing for the shot, and better accuracy on the timing equals a higher score. Enemies generally travel in packs, and as the game picks up speed, there’s even a helpful line drawn between them to show the order of destruction. You can choose to have the icons as ABXY or up/down/left/right, for ease of getting a quicker read on which button to use, but if you press the wrong one then the shot won’t fire. Sometimes that just means an enemy will get a few extra shots in, . (-edit-  As Sennin says in the comments, that doesn’t actually happen.  In my defense, that section in The Message where the sliding walls meet in a point doesn’t look like you should be able to get through it, plus I died trying while testing it the first time.  Turns out you actually can get through if you’re verrrry careful.  Personal apologies to everyone at Curious Panda for the error.)  Don’t screw up the timing or hit the wrong button, however, and everything will work out fine.

Each level is divided into three parts, although not in any particular order. It always starts with the standard rhythm-based shooting, which fills up the bulk of the level, but there will also be a Hyper Speed section and a boss fight. In Hyper Speed you fly along a path and hit either the buttons or the correct direction on the gamepad to the beat in order to follow the arrows on the path. Usually (but not always) this leads directly to a boss encounter, and fighting it is mostly about dodging some very pretty shot patterns, with a handful of notes to hit along the way. Miss every shot and he’ll die for anyway, exactly the same as if each beat was hit perfectly. Hitting beats adds to the score multipler, though, so it pays to do more than hang around dodging.

The problem is that the shooting doesn’t make sense with the rhythm genre. Enemies fly around until you’re allowed to shoot them, no matter how easy a target they are. If an enemy is behind a wall, your bullets fly on through as if the obstacle doesn’t exist. You dodge enemies, walls, and rippling fields of bullets, shoot when the music allows it, and try to suppress the part of your brain that wonders what makes one beat better than another for blowing away enemies. Rhythm Destruction combines the shooter and music genres, but the two each have lumpy bits that didn’t quite combine into a single unified experience.

That doesn’t actually make it a bad game, though. Once you accept the rough edges and get down to learning the enemy patterns there’s some decent gaming to be had. The techno soundtrack has a few dud songs, but I’ve got to admit to having one or two of the better ones stuck in my head. The shooting synchronizes to the beat perfectly, and when you finally make sense of the shot order in the more complicated levels (after many, many deaths and restarts) it can get very satisfying to clear out the enemy waves. Rhythm Destruction has its problems, no question, but it’s also an interesting experiment in combining genres.