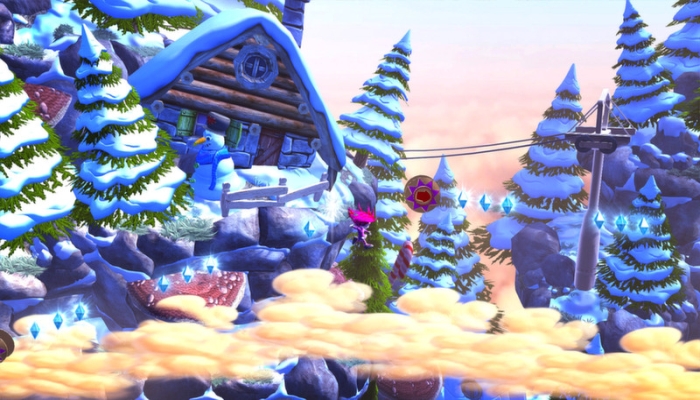 The Giana Sisters have had an interesting history in gaming; debuting in a C64 game that was taken off the market due to its similarities to Super Mario Bros., then going into exile before a sleeper hit of a DS game brought them back to a more modern audience. Their latest incarnation came about due to Kickstarter, which allowed the game to be created, while the hard work and passion of the developers has paid off with fairly high marks for the PC version. After a few months of PC exclusivity, it’s now available on XBLA, with a PSN version due for release in the coming week. As a Kickstarter backer who was unable to play the game due to a lackluster PC, being able to play this game is even more exciting because it’s the first time I’ve been able to play a game I’ve been anticipating since the moment it was first shown.

Like past Giana games, Twisted Dreams is a platformer, and quite a challenging one. Gamers used to the 8 and 16-bit days where tough games were the rule rather than the exception may not be in for too big a shock, but if you were raised on more modern platformers that hold your hand and pretty much play the game for you, then this game’s challenge may be too much for you to handle. The core game involves switching from happy Giana to punk Giana on a regular basis to make use of each version’s unique powers, uniquely-colored jewel pickups, and areas of the world that can only be access by a certain version of the character. 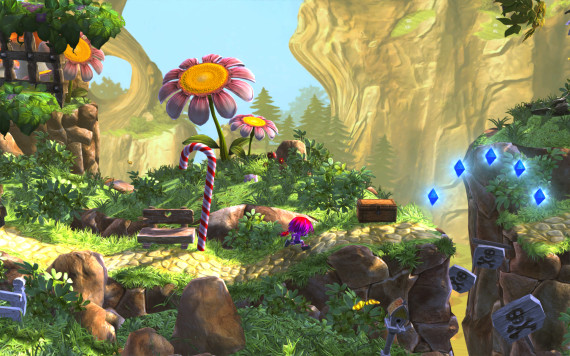 Sweet, adorable blonde Giana’s world is populated by nightmarish things like demons with horns thorny worlds with dark, spooky colors while punk Giana’s parallel world is full of adorable birds and bright blue skies and the greenest of green grass – basically playing off of things that appear to be stark contrasts for each personality trait while also providing dazzling views that can be changed on the fly. Blonde Giana jumps on heads to defeat them, while her punk variant BLASTS THROUGH EVERYTHING WITH A FIREBALL DASH that can not just send you through enemies, but bouncing around the stage. What this means is that you’ve got a game combining the best elements of a more traditional 8-bit platformer like Super Mario Bros. with something from the 16-bit era like Rocket Knight Adventures, a game that sprang to mind the first time I used the dash attack.

Just like the rocket ability in that game, you need to carefully use it to avoid flying all over the stage carelessly. There are some areas where you’ll want to keep using it though – like exciting paths that are basically pre-cut for you that bounce you around the area in rapid-fire fashion to get to the next area. They’re a welcome change from the usual platforming mix and help the game feel much faster-paced given that it’s usually either traditional platforming or some light puzzle solving that occupies your time. Being reckless will result in plenty of deaths, and while many of them will be due to carelessness, some can be blamed on the game due to it not always being clear what you can jump on and what you can’t to avoid damage. Each form of Giana can also go through different objects at different times as they become kind of transparent, but wind up blending in with the environment a bit too well. It’s a source of frustration, but a minor one as checkpoints are frequent and you have unlimited lives to beat each stage. Your score is tallied at the end based on how many gems you collect, and there’s no penalty in the main game for dying a lot other than the shame it brings the player. 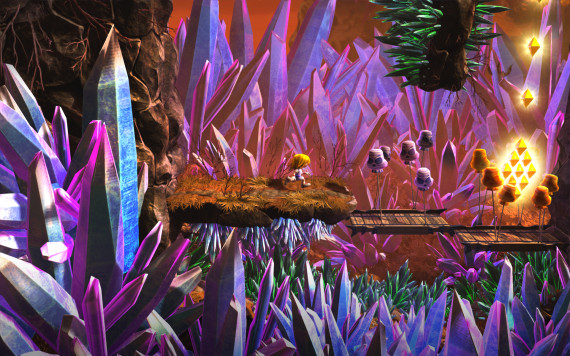 While the environments might kill you from time to time, the controls never will. Jumping as either version of Giana is easy to do, as is twirling in the air to gain more control over your descent during boss battles or especially freefall segments where you need to go back and forth in order to get all of the gems.  Zooming around as punk Giana requires some practice, but after a few segments where you absolutely need to learn the mechanics of it, you’ll be used to it. Twisted Dreams goes with a trial by fire approach to teaching you things, and it works out fairly well since checkpoints are frequent and you can just retry until you figure stuff out for yourself.

Visually, Twisted Dreams is stunning to look at. The character designs are all simplistic and in line with classic 16-bit platformers, but their execution in the game is gorgeous. Everything from a torch in the farthest part of the background to the most important foreground element looks outstanding and full of detail. There’s a ton of polish evident in just screenshots, but those can’t convey how smooth the animation is. The transitions from light to dark versions of the world are smooth and will blow your mind when you first see them. They’re kind of like Sonic CD‘s changes from past, to present, to future, but with more jarring color changes. Like that classic game, it is interesting to track differences from one to the other. Seeing bright trees go from a lush green to absolutely dead and barren is shocking, and helps make the world you’re in seem lived in – and not exactly by the nicest of folks either. Beyond smooth transitions, character animation is also lush, but manages to strike a balance between looking smooth and not taking so much time to finish that it winds up messing with your timing. For a platform game, that would be a killer, and Twisted Dreams avoids that fate nicely. 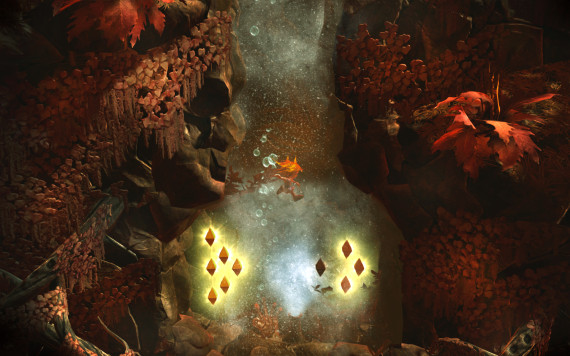 Twisted Dreams has the most rock-heavy soundtrack I’ve ever heard in a platformer and it’s both epic and really fun to listen to. The songs change depending on the light or dark version of the world you’re in at the time, and if you so desire, you can just play with one or the other style of music. Even the “light” versions of the music have a heavy synth metal sound to them, kind of like something out of Epica or Nightwish’s playbook, while the dark versions are more visceral and in your face. There’s slightly less beauty to it then, but it’s more intense and works well to add excitement to the game. The sound effects vary from solid and effective like bonking enemies or gathering to satisfying when you’re zooming through stages with the boost ability. They’re good, but not likely to stick with you as well as the soundtrack will after a play session.

At $15, Giana Sisters: Twisted Dreams is well worth its cost to platforming fans. PC owners with a powerful setup may want to pick it up on Steam though, as it’s currently on sale for half-off there. However, if consoles are your preference and you love platformers, then buy this ASAP because it’s one of the finest examples of the genre on modern platforms. The level design is challenging in all the rights ways and the gameplay mixes things up a lot considering there are only a few things you can do. The game is all about stringing those few things together in new and different ways with each stage to keep things interesting, and it works. The graphics are incredible, as is the soundtrack, and it combines the polish of 16-bit platformers with modern technology to give players the best of both worlds.