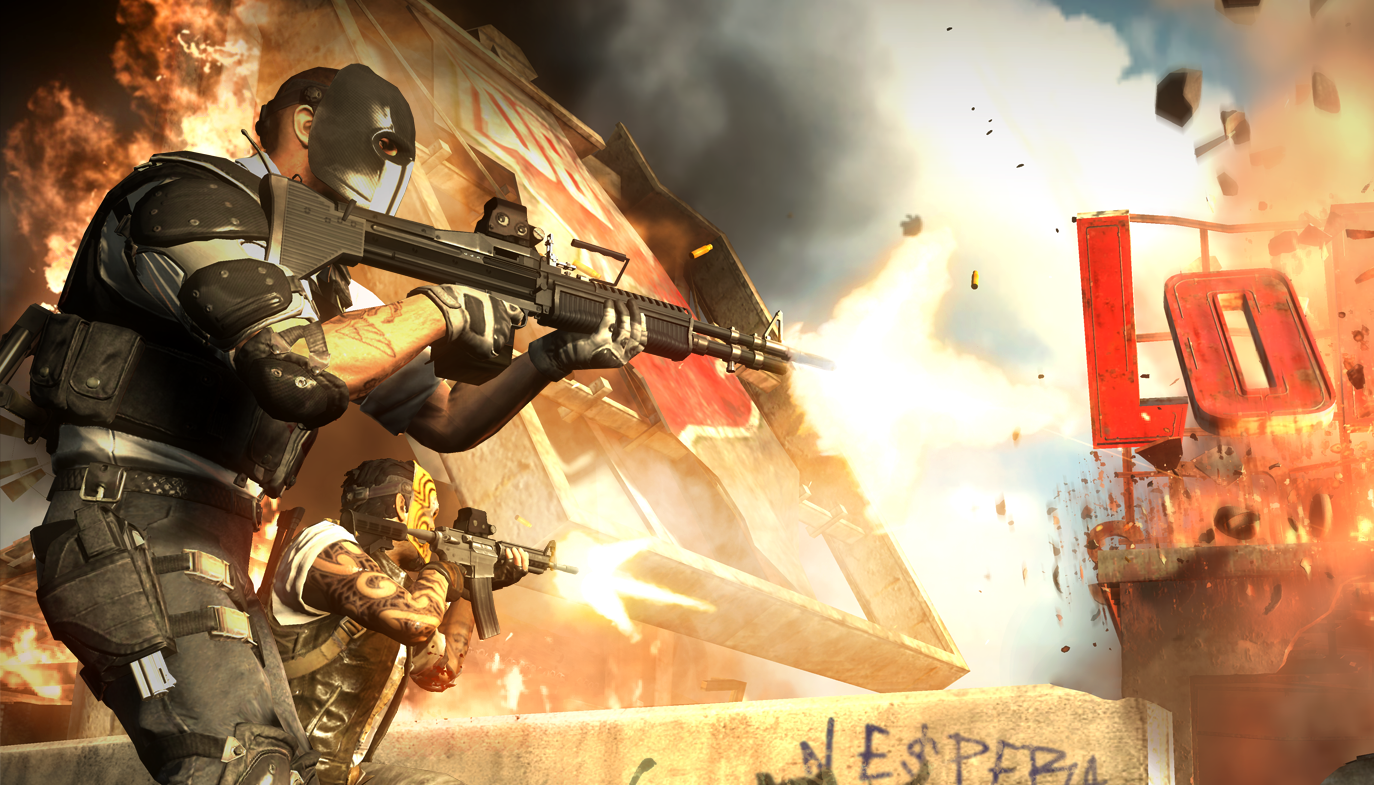 Army of Two is sort of an odd duck series as even though it’s a recognized name, sells well and has spawned multiple games, it never seems to get much attention when a new entry rolls around. Case in point: The Devil’s Cartel, a game that sort of just snuck into retail unannounced with little hoopla or marketing. While it was released the same day as the game with enough buzz you’d think it was a beehive, BioShock Infinite, perhaps that speaks even more to EA’s indifference about the series for selecting such a release date. Five years and and a closed development studio later, however, The Devil’s Cartel marks the third entry in the series, but it’s going to take more than changing the setting and main characters’ names to drum up the interest needed for its ultimate success.

For whatever reason, The Devil’s Cartel shifts the protagonists from Rio and Salem to the oh-so-cleverly titled Alpha and Bravo. While Rio and Salem were far from iconic video game characters, it’s odd to shift it to two unknowns when fans of the series likely wanted to continue in their footsteps. Luckily, the two do play an important role in the story, but are never playable — and the story is not very good, so it’s a bit of a wash. The game opens with the two new operatives barreling down the streets of Rio protecting a good-natured politician named Cordova who plans to clean up streets. Suddenly, the convoy is attacked and the T.W.O. operatives are launched in to batt — er, actually a tutorial five years in the past. Then to save some random girl named Fiona. Then back to the original battle. And that’s a big problem with the game: a disjointed narrative light on sense, but heavy on convoluted plot points. The jist of the game is easy to understand: dudes with crazy masks = good, cartel = bad, but nothing else is fleshed out to the point that anybody should care. 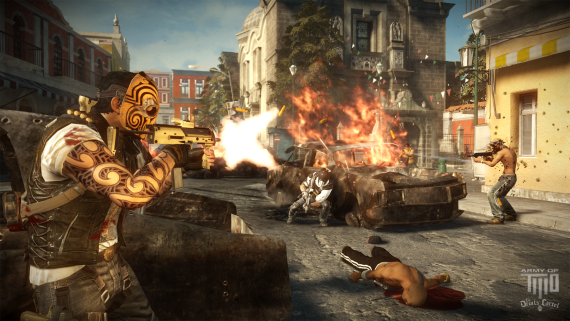 Before you go accusing me for not liking over the top humor, know that The Devil’s Cartel is fairly devoid of it. Yes, the trailers show missiles going though vans, sliding down hotels into pools and trains slamming into stuff, but that consists of only a few surprisingly straightforward minutes of the game. Most of the story is instead the standard rescue action plotline we’ve seen countless times before. Instead of Alpha and Bravo making humorous quips throughout, they have banter like “You know I got a girl back home.” to which Bravo replies, “What’s his name?” and frequently talk about boats for some reason. Almost every joke falls flat and are akin to something a middle schooler would write. It’s a shame because the story had the potential to be intriguing, and if the game drafted some decent writers, we could have a fun story in the vein of Crank or at least Savages. I mean, really, how hard is it to match the writing of Savages?

Unfortunately, the setting fares no better. While the mysterious and tradition-soaked streets of Mexico are the perfect setting for an action game, especially in light of the current conflicts there, little is done with it here. There are some neat areas, like a shootout setting off fireworks in a Day of the Dead celebration or old churches, but the majority of it is brown, boring corridors. Enemies are little more than generic renders and even the action set pieces don’t seem like they belong in what is (used to be?) a AAA series. In an area where you’re avoiding a gigantic truck of death, for instance, instead of putting tons of skulls around it or making it breath fire (something actually “over the top” like the game has incorrectly been labeled to be), it just looks like a big mass of metal. 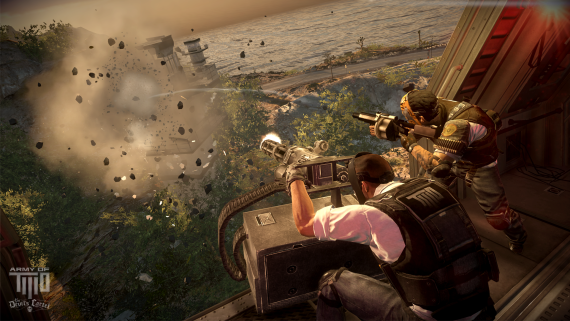 The boring environments are only accentuated by the repetitive gameplay. The game simply goes from one corridor to another, stopping for five or ten minutes as you take out wave after wave of enemies. Besides a few set pieces, the game stays the same throughout the seven hour experience. It may be more excusable if it weren’t for the poor cover system requiring each area to have an excess of random blocks to crouch behind. While cover systems are a fine component of any third person shooter, it’s presented in a very confusing way here, having you go between spots by pointing the analog stick at the desired location and pressing A. As there’s multiple points available to go to, it’s almost impossible to choose correctly in the heat of battle. Simply hitting a button or automatic crouch would have worked fine, making this system of going from cover to cover not only unnecessary, but bizarre.

Amidst all the glaring issues, the core of the game is actually quite fun to play. Provided you don’t get tired of the repetitiveness, there’s solid combat and shooting action to be had. Aiming and running around is smooth, letting you feel like a gunslinger swapping between close and long range weapons, with a ton of unlockables to do it with. A great new addition is “Overkill” mode, allowing players to go berserk with increased damage and invisibility for a few seconds after charging it by earning points throughout a level. It’s not only helpful in tight situations, but makes you feel like Rambo tearing through environments. Even outside of this mode, environments are destructible, adding a sense of realism to the affairs and allowing enemies to be fleshed out instead of camping in the same position. Of course, the game truly shines in multiplayer. Even though it doesn’t allow for a lot of strategy, simply blasting through thousands of baddies with a friend is a whole lot of fun. 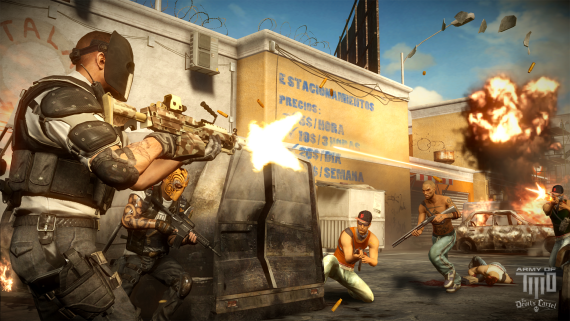 Army of Two: The Devil’s Cartel is not a bad game — just an extremely generic one. Even though it’s easy to criticize story faults and design choices, nothing makes the game frustrating and the shooting mechanics are quite enjoyable. Of course, that’s faint praise for a game that should have easily exceeded its predecessors but instead lags behind them. It’s doubtful anybody thought this would be a blockbuster on its own merits, but it had a chance to at least be a sleeper hit if the developers would have committed to making it as ridiculous as possible. Instead they played it safe and we’re simply left with a milquetoast third-person shooter that will likely bookend the series on a sour note.