It has been nearly six years since Irrational Games introduced arguably one of the most defining games of this generation into the market, and it looks like they’re doing it again. A long development and constant delays have had fans around the world biting their nails in anticipation and concern, but they won’t have to wait any longer to see the outcome. Can this revolutionize interactive storytelling in video games, or has this been a wasted effort?

You can’t talk about Bioshock Infinite without starting with the storyline. The game takes place in 1912 on the fictional floating city of Columbia where Booker DeWitt, the lead hero, is sent to rescue a young girl named Elizabeth to pay off his gambling debts. The world that has been created is absolutely gorgeous and full of depth. For one, the citizens are highly religious folk who somewhat deify the American founding fathers, while demonizing Abe Lincoln. There’s a strange sense of racism that will make anyone uneasy at first but realize that’s just how this world operates. There’s also an explanation for everyone, such as why you can jump insane distances and latch onto hooks, and why the city is able to fly in the first place. 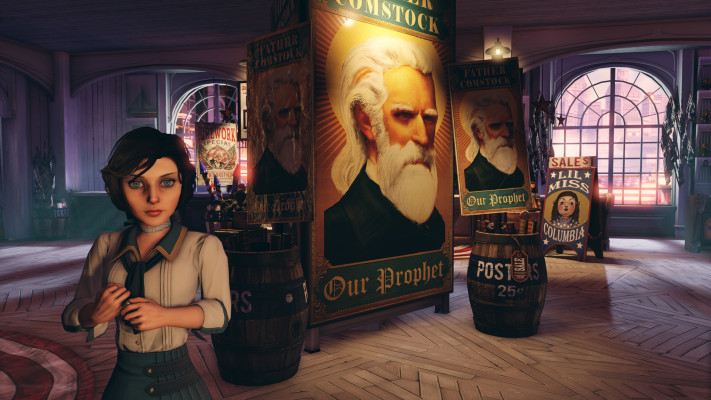 While Booker feels somewhat two-dimensional for the majority of the story, there are a handful of colorful and lively characters that grace the game. The performances by Elizabeth and the Lutece twins standout immensely, offering some of the most believable and charming characters in any game. For example, when Elizabeth witnesses her first gunfight, she’s so freaked out that she starts screaming and runs for her life. As she experiences new aspects to life, Elizabeth specifically will adapt and react differently as her persona grows ever so subtly throughout the story.

While this may seem like a new experience, there are tropes that make Infinite feel very much like a Bioshock game in terms of gameplay. The shooting mechanics are as solid as ever and there’s a strong arsenal at your disposal. The only problem here is that, while the mechanics are satisfying, they don’t feel all that inspired. It’s not like they’re aiming for a Call of Duty atmosphere, which is a good thing, but there was never a moment where exclusively using guns was all that gratifying. It’s thanks to the overly graphic melee attacks and creative supernatural abilities that ensures fights are both enjoyable and distinguished.

Instead of plasmids, players are given vigor, which essentially works the same, offering a whole new level of strategy when going into a firefight. Taking control of enemies, burning them to a crisp, or just lifting them into the sky gives gamers multiple and creative ways in disposing of gun-wielding psychopaths. The only confusing part here is that, while vigor is very popular within the world, there’s only one type of enemy that seems to obtain special abilities. It would have been interesting to see more enemies utilize these types of abilities and fight back with them, rather than your traditional blood hungry soldiers. Regardless, they do throw in both overpowered mechanical enemies and even spiritual ones later on to try and vary up combat. 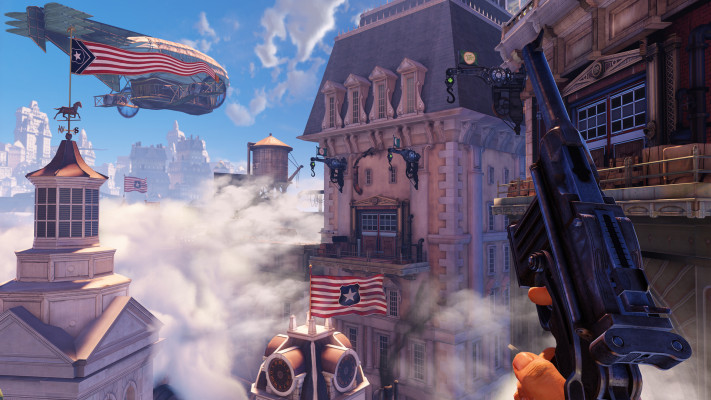 The newly introduced skyhook offers two different aspects: transportation and attack. The absolutely stunning city of Columbia has what they call skylines which will transport anyone to a given location with haste, so long as they have a fancy device. It’s only when they’re used in the midst of combat or story-specific spots that can cause some of the most intense and cinematic moments. Zipping from line to line while gunning your way around the world will have anyone’s heart racing. Bigger enemies are even introduced such as the Handyman which can electrocute the rails, causing players to play more conservatively and cautiously.

While the main objective is to escort Elizabeth back to New York, it’s made clear right away that she can handle herself in combat. This doesn’t mean she’ll fight alongside Booker, but you won’t have worry about her and she’ll even offer up assistance by opening up tears in the universe, which allows for automated turrets or mechanical chain gun-wielding allies to be brought in. She will also throw Booker ammo if his clip is empty, scouting for cash around the environment, and will even act in eliminating a game over screen by bringing our hero back from the dead. Suffice to say, this is the way more games should handle their protection storylines: having the person you’re escorting actually be helpful rather than a nuisance.

It’s also important to mention that the conclusion of the Bioshock Infinite is something to be inspired by. We’ve seen many games lately, especially the third in a series, end poorly and abruptly. What Bioshock Infinite does is set up a coherent story interlinked from start to finish that slowly feeds new information and twists right up until the end. Nothing is as they seem as there is a coating of metaphysics that deals heavily with the plotline, creating a sense of wonder and disbelief. There was never a moment of disappointment, either; only emotional distraught that will have players completely hooked. 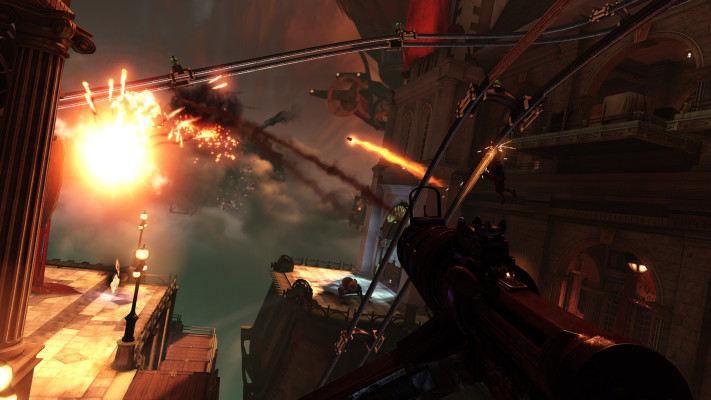 Bioshock Infinite recreates the feeling of a unique new IP while maintaining service to existing fans. Irrational has crafted a stunning and creative world populated by lively characters you don’t see in many games today. Mix in the unbelievably memorable conclusion and you have a neatly constructed story that will put many adventures to shame. Whether or not you enjoy first-person shooters is irrelevant. It is whether or not you want an experience like no other; one that will be left in the back of your mind for years to come.