Evoland is an Action RPG that takes the player through the history of gaming in a thoroughly humorous and nostalgic experience. Unlike most RPGs, the game is focused less on character development and leveling up and more as a humorous experience designed to bring a smile to the faces of veteran players as they progress through the various ages of the RPG, taking in the sights and bringing up fond memories. Packed to the brim with endless references, it’s clear from the start that Evoland was made with the utmost love for games of time gone by and provides an authentic experience throughout.

Evoland is a game with a lot of charm, not least due to its sincere parodies of aspects such as the linearity of open world games like Final Fantasy, complete with a suspiciously named substitute called “Kaeris”, who specializes in magic asks our hero (and the player) politely to help her save her town.  Of course the player is forced to agree as to set into motion the events of the game. The humor makes sure that the player knows that this is clearly a game made from the heart and not once do the references feel forced or contrived. What will appeal most to gamers are the faithful replications of games like Final Fantasy and Zelda. Beginning the game with nothing more than the ability to move right and with Gameboy era graphics, the player soon, “unlocks” features such as SFX, 3D graphics and HD textures which are used uniquely as an aspect of the gameplay, becoming more advanced as the player progresses through the game. It’s hard not to raise a smile when switching from 2D to 3D within a matter of seconds and such use of visuals and sound is nothing if not innovative, helping to immerse the player into a game that reads like a history book of the gaming industry. 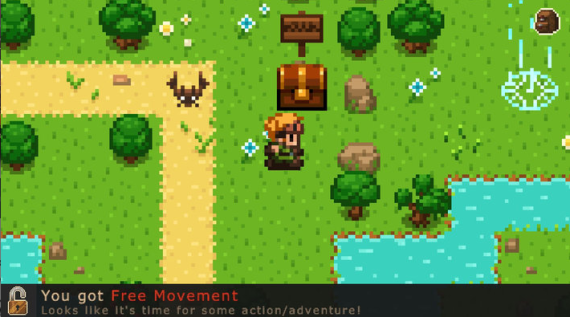 That’s not to say that the game is perfect by any means, as there are several flaws that stick out as surprising, considering the obvious care to detail within the game. Factors like the lack of a sprint unlock came as a surprise considering just how expected it is in line with the other unlocks, and in certain parts of the game, it comes across as a very much needed feature which lack of inclusion can only serve to puzzle players. The switch to Diablo-like gameplay for a dungeon is very much less polished than the rest of the game and it’s not rare to find yourself shouting out in frustration as you try to adapt to gameplay so clearly not replicated to the high standards of the battle systems for the Final Fantasy and Zelda sections. That’s not to say it’s bad by any means, but the high standards laid down previously by the game serve only to emphasize just how annoying it is to have to deal with the clunky controls that are introduced and the dungeon will have players pulling their hair out in frustration as they die many a death trying to come to terms with the controls.

The balance of the game also works against it as the various unlocks, arguably the most intriguing parts of the game, are largely completed within the first third. It’s hard not to feel that they should’ve been spread out further throughout the game, as you find yourself wanting to spend more time immersed within the 2D world, which is soon eliminated to make way for 3D, proceeding to make up the bulk of the rest of the game. That’s not to say the 3D sections are any less impressive, it’s just the enjoyment of the game as an interactive history of gaming is over all too quickly and leaves the player crying out for more. Such weighting to the first third of the game can also be seen in its references, which gradually decrease as the game goes on. Early in the game everything the player interacts with has a witty remark or object leading to several genuine laugh out loud moments whereas the latter stages lack interactivity leading to a loss in the charm that the game possesses as the game becomes an almost straightforward RPG.

Evoland is a unique game in that it’s impressive to see the scale of references and care to detail that is present within it. Despite several surprising flaws, it’s not often in a game where one can relive some of the greatest game-playing experiences from Final Fantasy and Zelda in a couple of hours and the combination of the two games is almost seamless in their execution. Nothing less than a love letter to the games of yesteryear, Evoland will delight players both old and new as it takes them on a journey of nostalgia through a loving send up of the best games of years past.