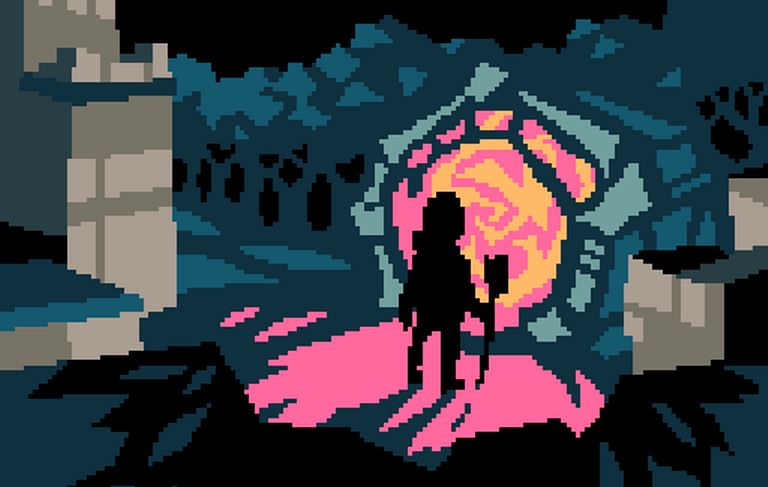 Anodyne is a top down action-adventure game that draws inspiration from some of the classic Zelda titles. The developers’ fondness for that iconic series is readily apparent, and at its best Anodyne feels like a genuine love letter to the adventure games of yesteryear. It does have a bit of a little brother problem, and its efforts to follow in the footsteps of its idol ultimately fall a bit short of the mark.

At first it seems like the story might be a cute little homage to Zelda, with a little bit of snark thrown in to keep things entertaining. Then things start getting weird. Only little things feel a bit off at first, but before long a general unease begins to permeate the game and you realize that this is not a simple hero saves the world kind of story. I don’t remember any of the older Zelda games featuring paranoid schizophrenics mumbling to themselves in the woods, and I certainly don’t remember finding any houses where the occupant had hung himself. The game vacillates between goofy humor and dark set pieces creating this really unique and interesting atmosphere. Anodyne does a particularly good job at pulling off the creepiness because it cloaks itself with an air of nostalgia. I keep the part of my brain responsible for nostalgia in the nice quadrant along with all my memories of kittens and sunshine, so when weird things start showing up it’s like my nostalgia got invaded by goblins and they started tearing limbs from the Muppet Babies.

While the atmosphere is solid and there are some interesting portions, ultimately the story doesn’t seem to know what it wants to do. While the first couple of dungeons do seem to at least have some coherent theme and hints at the overall narrative, later portions seem almost entirely unrelated to each other and it feels like the game is being weird simply for the sake of being weird. At times there is an effort to be philosophical, but it is clumsily done and certain segments wind up feeling pretentious. There just isn’t a cohesive narrative, and while bits and pieces are genuinely interesting or unsettling, as a whole the story just ends up feeling disjointed.

Anodyne is about as old school as you can get, and there is a heavy reliance the simple puzzles and exploration that made the old Zelda games so successful. There is a nice big map the look through with a lot of things to find, and the exploration actually gets better after you defeat the final boss because you unlock a new ability that lets you reach corners of the map that were previously inaccessible. While I don’t want to spoil anything, it really is a clever and very unique tool to have at your disposal and it is just a little disappointing that the game waited until it was over to pull out what was really its best trick. I found the post game stuff almost more enjoyable than the actual quest, and Anodyne does a nice job of not only encouraging exploration, but giving you a lot of interesting environments to explore. The levels are well varied and memorable and alternate between standbys like forests and cliffs and bizarre, unsettling environments like a black and white town inhabited by ghosts or a creepy circus with ominous headstones detailing past events. The map also has multiple warp points that make it easy to get to even the far reaches of the map quickly, something that makes the necessary backtracking more palatable.

The actual gameplay is simple but well executed and that the game remains entertaining throughout its entire run. You wield a broom to defend yourself against a variety of enemies, many of which are mostly harmless once you figure out their simple patterns. The boss battles are somewhat of a disappointment and tend to lack any sort of creativity or challenge to make defeating them feel rewarding, with the notable exception of the final boss. As a whole the game is fairly easy, with the only real difficulty coming in the form of some poorly implemented platforming segments. Later portions of the game have this weird emphasis on awkward jumping puzzles, something the controls for Anodyne aren’t particularly well suited for. Diagonal jumps are the worst, and it feels like your forcing your character to move in a direction he isn’t wanting to go.

Each dungeon usually has some new mechanic for you to play around with, including one that is an actual maze and another that uses speed panels to help you jump further. There isn’t as much variety here as you’ll find in a lot of the classic Zelda games, but there is enough that the game prevents itself from becoming too repetitive. Simple puzzles end up blocking your progress in the various dungeons, but unfortunately most of them aren’t any more complicated than getting an enemy to stand on a switch. Anodyne certainly has its moments, but the truth is the creativity that went into coming up with unique areas and dungeons doesn’t extend to the actual design of the levels themselves and even the later dungeons are fairly straightforward and simplistic.

While Anodyne is clearly piggybacking on the classic Zelda games, it offers a unique experience and manages to find its own voice, even if that voice occasionally morphs into the high pitched scream of nightmare ghouls. Fans of the old school adventure games should definitely enjoy the combination of exploration and puzzles the game offers and Anodyne is a nice throwback to a type of game that you simply can’t find any more. The game does end up feeling a bit more like Zelda-lite than an actual Zelda title, and the actual gameplay and puzzle design lack the same creativity found in the wonky story and environments. Even with its flaws, this is a very impressive product from what was essentially a two man team and is worth checking out for anyone who still remembers how to find all the dungeons in the original Legend of Zelda.