Giana Sisters: Twisted Dreams was pitched to fans on Kickstarter in July of 2012, and released on PC mere months after receiving its full funding before hitting XBLA last month. Last week, we had the pleasure of conversing with some of the folks at Black Forest Games, including Creative Director, Jean-Marc Haessig, Technical Art Director, Eric Urocki, and Adrian Goersch, Managing Director, about the project and its history.

[Hardcore Gamer] When was the initial concept for the personality-switching mechanic thought of and how hard did you think it would be to implement?

[Jean-Marc Haessig] Morphing the worlds was the initial idea, as it matched very well with the legacy of Giana’s transformation into Punk. The goal was to emphasize that aspect, applying transformation to the whole scenery and game mechanic instead of just having a character transformation. There were two difficulties to solve: the technical side, on one hand, required some dedicated technology to do morphing in real-time, and that also had a strong impact on asset creation, requiring very precisely defined and created environment assets. On the other hand, we had to figure out how the level-transformations could be used in the gameplay, because we really didn’t want to use such expensive world-morphing technology for visuals only. We struggled several months to find the right approach and pacing, and it was particularly difficult to envision that on paper. Once we had a prototype, it was way easier to try out combinations and nail down what the gameplay delivered.

[Eric Urocki] I thought it would take time to implement, but I didn’t immediately realize all the problems we would encounter when doing the morphing of the world. Every single asset became a challenge for our 3D artists, resulting in production times for 3D assets that were three times higher than without morphing. The morphing is really not an easy part, especially when the shapes of the two objects are really different (a sledge, for example, transforms to an anvil). It’s not only that every asset has to be produced twice for each world, but morphing two assets requires them to have exactly the same amount of polygons and in the same order, which is very difficult especially when the two assets have a completely different shape. This is really the tricky part which made our 3D artists mad. So yes, we thought it would take some time, but it was more challenging than expected originally. Despite 3D asset production being long and difficult, the other parts of art production were really fun. Everything morphs between the two worlds, not only 3D assets, but also the lighting, the particles, absolutely everything, and those parts were not difficult, but rather amazing to do. 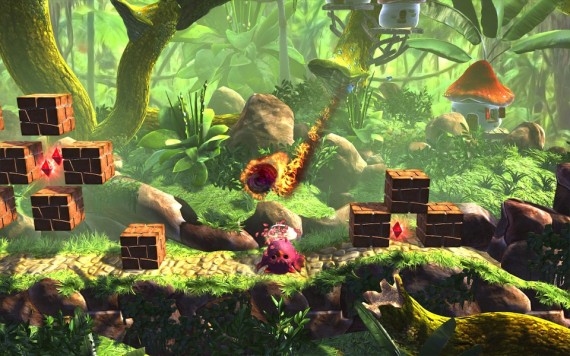 “Everything morphs between the two worlds, not only 3D assets, but also the lighting, the particles, absolutely everything, and those parts were not difficult, but rather amazing to do.”

[HG] When it was conceived, did you think you’d be able to pull off the smooth transitions between the light and dark worlds? Did they make designing stages a logistic nightmare or were levels always meant to be designed around them?

[EU] Our tools and tech programmers made our lives easier by adding the functionalities which allowed us to switch, in one click, from the cute to the dark world in our level-editing tools. Globally every asset of one world morphs to its counterpart in the other world, so it was not necessary to build every world from scratch twice, but it was still necessary to see what objects were morphing into.

[J-MH] Actually, doing straight and smooth transitions worked well, but it was rather disappointing, as we had to let them morph relatively quickly in order to not slow down the game flow too much. We designed the assets with the following rule: objects in Giana’s light world had round and inflated shapes, while the dark world was the exact opposite, with spiky and dried out shapes, in order to create a breathing world when switching. But even that wasn’t enough, as most of the assets were in the background. At some point we added a wobble effect during the transformation in order to emphasize the ‘breathing world’ effect, and that really paid off. At that stage, we were very happy with the visual effect, but we had still to find how that idea would impact the gameplay.

Once we had the prototype with the morphing assets in place, it was easier to envision the stage design. Scripting with temporary assets allowed us to try out gameplay transformations and to create very special elements to support level design ideas. Once we had the prototype, which gave us a good understanding of the impact of morphing, it was easier to try relevant gameplay mechanics with some scripted grey boxes inserted into already rich environments, before converting them in nice graphical assets once they made sense. That process allowed us to create complete levels with only gameplay relevant assets in place, and allowed us to tweak them to satisfaction before placing all the additional morphing environment assets around them to make the levels pretty. 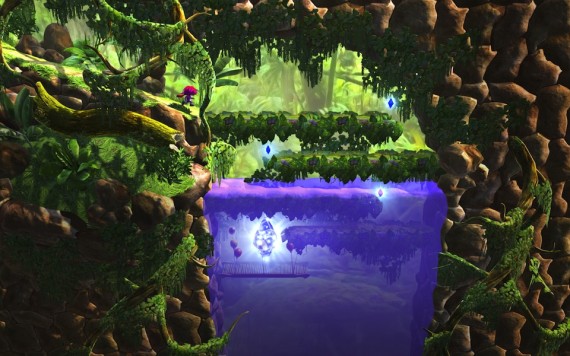 “Once we had the prototype with the morphing assets in place, it was easier to envision the stage design.”

[HG] Was there ever discussion about going with a cel-shaded, or a more traditional 2D platformer pixel art look in keeping with past Giana games or was the plan to always go with the newer, more modern look?

[J-MH] We briefly discussed other options at the very beginning, when we weren’t sure it would be possible to do 3D morphing. But one week later we had our first morphing asset test on a screen, and every other option was happily discarded. Cel-shading wasn’t in our focus, as the real-time morphing was already enough work for the hardware to process – cel-shading requires a bunch of post-processing power on top. Maybe it would have worked perfectly in the end, but that wasn’t on our radar during development.

[EU] It took some time before we found the final look of the game, but it was never planned to go for 2D pixel art or cel-shaded look. We spent most of our time at the beginning trying to find the right style for the textures and shapes of objects. We wanted to make something overdone, but not toony.

[HG] Given how complex the visuals are, there’s always a risk of making things too busy to accurately tell where you are in relation to enemies – was avoiding that in the final product an easy thing to do or more a case of trial and error?

[J-MH] We had to play around a lot with lighting in order to improve the game’s readability. Other effects such as fog and particles also helped on that front. Once we had the solutions, it was just a lot of work to apply them in each level, as it had to be tweaked for each situation. On one hand, it wasn’t absolutely efficient, but on the other hand the players really feel our love for details, which really gives us huge satisfaction.

[EU] Having complex visuals was, in fact, a problem for readability. During the production I found tricks to get rid-of most of the readability problems. Globally, levels were always created by level designers first, then dressed by a 3D artist. At that point the levels were generally nice, but most of the time the readability was really bad. It’s mainly by adjusting the lighting and placing local fog particles that I was solving those issues. You cannot imagine how better the  readability is when you have a lighting coming from the back of your scene instead of coming from the front, for example. So, for most of the parts it was not so difficult, it just took time. Only some very specific elements were really problematic. Some gameplay elements placed in the environment damage the player, and are not animated. It forced us to add particles effects like green poison for spiky plants or distortion effects for invisible platforms to allow the player to recognize them better. However, the results for those specific elements are still not perfect and we want to improve them in the future. 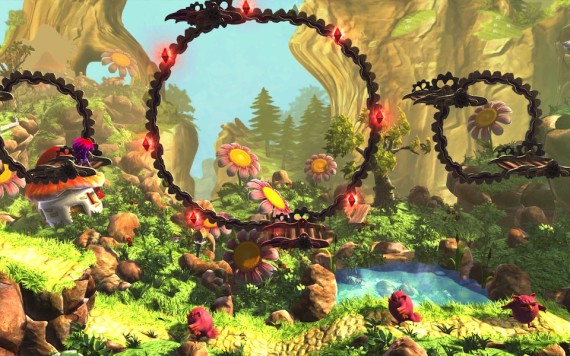 We spent most of our time at the beginning trying to find the right style for the textures and shapes of objects. We wanted to make something overdone, but not toony.

[HG] How rewarding was it to see support for the game get so far on Kickstarter that it wasn’t just funded and able to be released on PC, but also home consoles as well? Are there any plans to put it on the 3DS or Vita? It seems like a perfect showcase for the latter system’s OLED screen.

[Adrian Goersch] The Kickstarter support we got was more than rewarding. Everyone on the team was running around with smile on their faces. To understand this, you have to realize that usually as a developer you spend months and years on a project with hardly the chance to get any feedback from your fans during production. Currently, we are working on the PSN and Wii U versions and we are planning at least for one handheld. 3DS is not on the table right now and we haven’t checked Vita yet. But, you know, there are always some twists with Giana, so we’ll have to wait and see where it ends.

Giana Sisters: Twisted Dreams is available now for $15 on Steam and its MS point equivalent of 1200 points on Xbox Live Arcade. Our review of the XBLA version is available here. We’d like to thank the folks at Black Forest Games not only for their time spent thoroughly answering our questions, but also for creating one of this generation’s finest side-scrolling platformers.