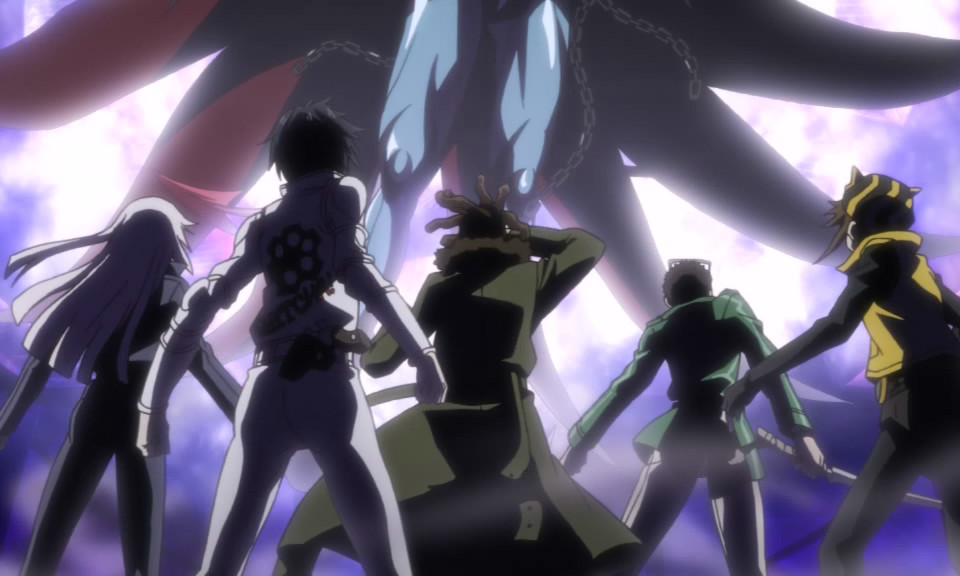 Shin Megami Tensei: Devil Summoner: Soul Hackers has an exorbitantly long name, and far too many subtitles. It also happens to be a 3DS remake of the late 90s Sega Saturn and PlayStation classic that never left Japan’s shores. Therefore, it’s essentially a port of a sixteen year old game — though this isn’t the haphazardly, spliced-together port that has been the bane of this medium’s existence for the past few years. In fact, it’s a rather robust update with a variety of new trinkets and tricks, but your question is still probably the same: is it worth the investment? Or perhaps the query is: how does a game such as this hold up under the weight of time? We’re here to answer those inquiries.

Soul Hackers takes place in an ultramodern Japan where technology and supernatural forces convene in a grisly merging of cyberpunk futurism and typical Shin Megami gothic-horror. As such, the usual suspects are at play in the game’s narrative. Meaning to say, players assume the role of a newcomer to the renowned hacker group, the Spookies, in the forward-thinking town of Amami City. Amami City is the world’s first fully network-integrated metropolis, and as such lends itself well to a population of technophiles and hacking gurus, all looking to tinker around and generally cause IT chaos. At the start of the story, players find themselves trying to hack into Paradigm X, a virtual simulation program that is being implemented city-wide, and closely resembles a Second Life-type experience where people can exist in a world as an avatar of their liking and live something of a virtual life. While trying to hack into the registry of Paradigm X to earn a spot in its upcoming beta, the title’s primary hero encounters a strange program that knows his name and informs him that they will meet in the coming days. Confused by this turn of events, the main character and fellow Spookies member, Hitomi, decide to call it a night. It’s only a short time after this that their group leader stumbles upon a mysterious contraption that allows people to summon demons, and all hell starts to break loose.

Soul Hackers is a game that has plenty of characters and plot-twists of which to keep track. While it certainly is a dungeon-crawler above all else, its story is clearly a main focus, standing side-by-side with its gameplay counterpart. Regardless of being surprisingly front-and-center in a game such as this, Soul Hacker’s narrative offers an intriguing tale, but not a wholly gripping one — perhaps even the weakest of the sub-series. It’s by no means bad, but simply lacking at times. Additionally, its pacing is somewhat on the slow side, gaining steam roughly five hours in. That being said, when the gears finally do get going, the story is well-told, knowing when to pull back and give players down time to think and enjoy the game, and when to ratchet up the intensity by unfolding a series of story developments that range from shocking to downright weird. All the same, whether the plot unveiling is entrancing or eye-squittingly questionable, the game does a pretty effective job of providing a cast of characters that are worth getting to know. It’s not the most memorable roster of personalities, but they’re charming  all the same.

The fairly strong localization helps this cause; however, there are times when certain pieces of dialogue seemingly get lost in translation. Ultimately, this can lead to some head-scratching moments of confusion. Even when the story is going off without a hitch, though, it all can still be hard to follow, due to the narrative jumping around to different perspectives and moments in time, but this sort of thing should almost be expected in a JRPG. While Soul Hackers gives most of its narrative attention to only a few of the characters, the roster of heroes and villains is deep. Better still, no two personalities feel similar, and the on-screen interactions between them feels life-like and believable, making it difficult to not care at least a little bit about each one’s fate.

As mentioned, Shin Megami Tensei: Devil Summoner: Soul Hackers is not just about its plot and assorted troupe of egos; it is a dungeon-crawler, and never forgets that. The title plays out like any other first-person RPG experience a la Etrian Odyssey or (for older fans) Shining the Holy Ark, and as such requires that much, if not most, of a player’s time is devoted to exploration and combat. Despite its age, Atlus’ nostalgic gem here prevails at gifting an adventure that feels engaging and timely relevant. To start with battling, Soul Hackers is a turn-based RPG that believes in the notion that less is not in fact more, and as a result, gives players a breadth of options they can use in any one combat scenario.

While wandering around in any one of the games many, many labyrinths players will encounter random battles. This is definitely one of the more dated mechanics in the game — and one that shows the game’s age – but it is tolerable nonetheless. Upon entering a battle, players can decide which actions they will take, with their party of up to six. Throughout the game, there will be two primary characters always present: your hero, and aforesaid sidekick, Hitomi. These are the only two combatants that can actually level up. When that happens, players earn new abilities and attacks, and also have the option to upgrade the character in whichever stat areas they see fit. In this regard, the experience is quite customizable, especially when it comes to the traditional outfitting of a fighter with items and equipment. The other four spots in the party are reserved for demons. 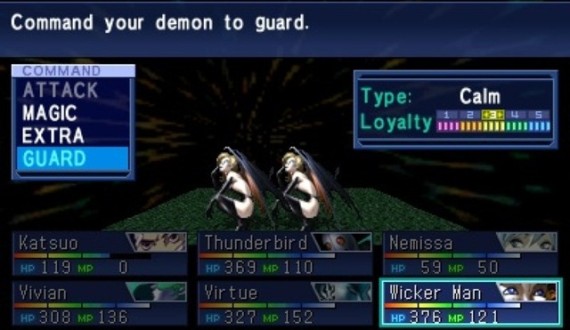 Throughout the adventure, players have the opportunity to talk with demons in battle. Instead of attacking them or trying to escape, a “Talk” option is always available in a standard encounter. When these demons are conversed with, Soul Hackers enters into a mini-game of sorts. Usually the enemy will say or ask something, and then the player is given a handful of options from which to choose. The type of response given to the assailant will dictate whether or not they run away, stay and fight or ultimately join the hero’s team. It’s a fun system that has become a bit of a staple in the Shin Megami series, and it’s easy to see where later installments in the franchise have gotten their ideas. Trying to figure out what to say to which type of demon becomes a game in and of itself, and regardless of how many times one does it in the 40-hour campaign, it always carries with it a sense of excitement and tension. In this aspect, Soul Hackers has a sort of catch-em-all, Pokemon quality to it, except with even more depth.

Each demon has their own personality type, which means this ultimately dictates what attacks they have and what their combat demeanor will be like. Personality types are also utilized in the demon fusion process. It’s not enough to just capture these monstrosities, Hackers wants folks to grow their own creatures. Consequently, the demon fusion system allows for this to happen. At certain intervals, it’s possible to combine demons together to create unique ones with unique powers. In actuality, this is the only way to level up a demon, as it cannot be accomplished by traditional methods. Therefore, demon fusion becomes a necessity to learn if players expect to make it through the steep difficulty level. No doubt this mechanic expands the possibilities in terms of the kinds of demons one can obtain and employ. Unfortunately, just as they cannot be leveled up, demons cannot use armor or weapons either, which feels something of a missed opportunity, or like antiquated design. At least there’s the ability to court these monsters with presents in order to keep them around, which again merely lengthens the depth of demon customization.

As mentioned, though, Soul Hackers isn’t an easy game; it isn’t afraid to whoop and demoralize you with a single crushing enemy. This is only compounded by the fact that save and rest points are few and far between. This was especially frustrating in some of the harder, longer dungeons, when battling and exploring for 35 minutes came to an abrupt end by way of a deadly encounter, sending me all the way back to my last save point. That aside, and interestingly enough, the game is actually one of the breezier Megami Tensei games, specifically designed as an entry-point title; but it’s still not a cake-walk by any means. Thankfully, this can be remedied via the lower screen. Since this is a 3DS game, the developers have implemented a new feature for the port. On the system’s bottom screen, players can fiddle with the game, altering the difficulty level, revealing entire floor layouts for the dungeons, or bypassing certain alignment restrictions on summoning demons. These options have aptly been dubbed “hacks” and make the game even more newcomer-friendly.

This isn’t the only addition to Soul Hackers on 3DS. There’s a new opening track and animated intro video (which are brilliant), improved load times, additional combat animations, 30 new demons and full voice-acting throughout the game. There’s a Streetpass feature to boot, making it possible to connect with other players and provide various demons, which are tradable for 3DS Game Coins. The fully voice-acted cast is great, even if the acting performances range from solid to awful.

What has remained unchanged in this port, though, are the graphics and audio. This is a bit of a mixed bag in that the visuals are not the best around. They appear pixelated at times and low-res at others. Intermittently they are vibrant and do a fine job at depicting the macabre setting. The included full motion video segments look especially cringe-worthy, with a resolution that probably didn’t even look all that great on the Saturn. They are bearable, just far and away from attractive. The soundtrack, on the other hand, is every bit as good as it was in 1997. The morbid hymns and cyberpunk chorales are full of vivacity and distinct sounds not otherwise heard in RPGs. 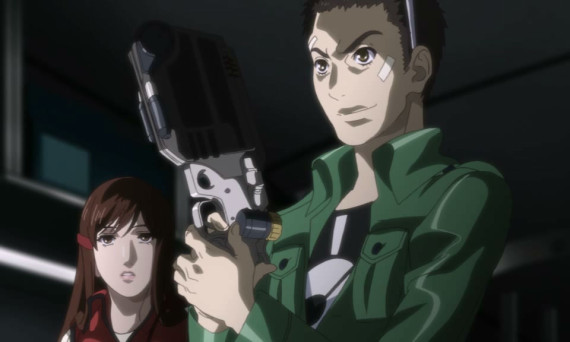 Perhaps the most impressive feat of Shin Megami Tensei: Devil Summoner: Soul Hackers is its ability to withstand the test of time. Despite it fast approaching the age of 20-years-old, it remains relevant and more than playable by today’s gaming standards. Better yet, it manages to even best some of the most recent turn-based JRPGs. This can be attributed to sound game design and the use of tried-and-true mechanics that have not faltered much, even in their age. Soul Hackers is also a game that isn’t afraid to give players a shedload of options. Sure there’s the main story to tackle, but then there are tons of mini-games and side-quests to check out. This coupled with a truly unique story and setting, as well as rock-solid gameplay, means Soul Hackers is a triumph through and through. This isn’t just some shoddy port; outside of the ugly visuals, this feels like a fully updated iteration of a game those outside of Japan never got to fully experience. We should feel privileged that we finally got this gem, as it’s a reminder of how a game with damn good mechanics can out-do even the latest and greatest ones. In 2013, this sixteen-year-old game feels fresh, revitalizing and just downright good. That’s an accomplishment all of its own.