Ah Interactive Fiction… In today’s world where the majority of games feature mind-blowing graphics, it must seem strange for many to see that all gamers had years ago were blocks of text that served to ignite their imagination and set them off on adventures far and wide. The most famous of these games were largely developed by Infocom and many players have fond memories of their various games such as Zork, A Mind Forever Voyaging and The Hitchhikers Guide to the Galaxy. The success of these games led to many other companies trying their luck, including Electronic Arts with Amnesia, a mystery game that was their only foray into the genre. Released at the near end of the mainstream popularity of interactive fiction, it was only a modest success upon release and has largely been forgotten by gamers. Yet what many gamers missed was a hugely in-depth game with writing from Sci-Fi great Thomas M. Disch and a unique world, the scale of which wasn’t even attempted again until the likes of Grand Theft Auto.

You wake up in a motel room with no idea of who you are, you’re naked and you open up the windows only to discover that you’ve somehow landed in the big apple. What’s worse is that there’s a trigger happy father downstairs who wants you to marry his daughter by any means necessary and the state of Texas wants your head on a platter. If you use your wits you may just be able to avoid all of the above and find out just who the hell you are. The plot of the game, always the most important aspect of Interactive Fiction, is excellent and from the get go you are drawn into the world of  Amnesia. There’s no doubt that this is due to Disch’s excellent writing which keeps the player engaged throughout the game and you may just be surprised to feel your heart race as you narrowly escape being killed or worse. Indeed the game is a very tense experience and you’ll find yourself stuck to the seat from start to finish as the game refuses to let go as you proceed through the various twists and turns that await you.

Perhaps the most impressive aspect of the game is its incredibly in-depth simulation of life in New York. Time carries on as in real life with shops opening in the morning and closing at night; lights come on in the evening and the mind boggling cacophony of streets are all included. In fact, the game even came with a map for you to find your way through the streets of New York and you better believe that you’re going to need it. All you get are the various streets signs telling you where to go, no markers on the map, no friendly AI, just you alone in New York City with not a clue of what to do. You must also make sure to reach places at the times dictated to you by NPCs, because if you don’t turn up, they will just leave leaving you stranded in the middle of the story by yourself. It’s impressive to see just how much detail went into creating the city so true to life and it helps to aid the general atmosphere that you truly are lost with nobody to help you except yourself. 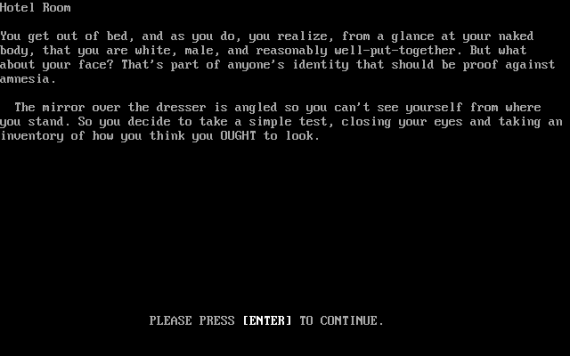 That’s not to say that the game is perfect and there are several drawbacks to it. Its tendency to railroad the players into certain choices prevents them from truly exploring the outstanding world of the game. This stands in contrast to games made by the likes of Infocom where the player could often do whatever they liked even if it meant breaking sequenced events or making the game unable to be to completed.  As freedom in Interactive Fiction is one of its main attractions such blocking of potential paths serves only to limit the potential enjoyment of the game as a whole. An annoying aspect of the game is to faint with little warning if you haven’t got enough sleep or are hungry resulting in what is essentially game over. It’s frustrating to be rushing across Manhattan only to collapse and have to load your last save, something that’ll be happening quite a lot unless you pay constant attention to your stats, something that detracts from the overall immersion of the game. 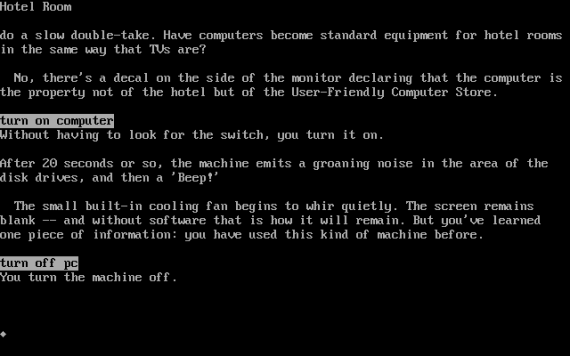 Yet despite these flaws, Amnesia is a must play for fans of Interactive Fiction and gamers who enjoy a great story period. The game, like many others of the period, is available via abandonware so there is literally no excuse not to play the game as soon as you can. So forget about graphics, forget about achievements and forget about the latest technological breakthroughs because Amnesia is a game that deserves your attention as a deep engaging experience that will have you glued to the screen from start to finish.