Black Rock Shooter: The Game is best thought of an on-rails shooter that is a love-note to fans of the wild anime and manga series bearing the same name. Essentially, it includes everything the show and books have to offer: flashy aesthetics, lots of explosions and of course the scantily clad Black Rock Shooter herself. But outside of these conventions, BRS:TG is a bit of a drab experience, and one that some gamers may find difficult with which to connect.

Black Rock Shooters’ plot is fairly straight forward: players assume the role of a gun-toting vixen who is one of the last humans on Earth. After an alien invasion decades ago, our beloved race was wiped to nigh extinction. On the brink of annihilation, though, is hope – hope that that comes in the form of the aforesaid death-dealing loli-succubus, Black Rock Shooter. With her long ebony hair, burning blue eyes, knee high boots, short-shorts and impractical bikini top, the game’s protagonist is one that’s easy on the eyes, especially for the gamers of the world who enjoy overly sexualized anime girls that have a dark, bad-ass side to them. Ultimately, it’s up to BSR to save the world from its impending doom, and to do that it means she must introduce these alien raiders to a planet-sized helping of bullets and all sorts of explodey-boom goodness.

In the respect of narration, the game will be delightful for fans of the franchise and eye-wideningly obscure for casual players that have little to no knowledge of the series’ plot. Even the most dedicated Black Rock loyalist will have a laugh or two at the game’s expense, though, due to some wretched localization blips. For instance, in the first few minutes of the game, players will be treated to some hokey dialogue including a jacked-up Special Forces soldier calling his subordinate a “noodle brain” among other lame insults. This sort of sets the tone for what to expect from the game in all other regards. 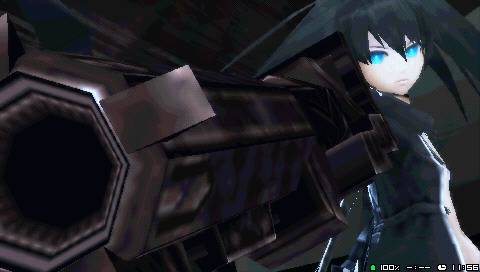 The truth is, however, Black Rock Shooter: The Game isn’t just about its story. In actuality, this is the type of experience meant to be played rather than watched or read, and consequently is not afraid to thrust players right into the action without over-emphasizing its plot. The gameplay is not much different from the narrative in that it seemingly lacks substantive depth. For starters, when players take control of BSR, they are unable to actually move her around on the battlefield. For a game that is all about fast kills and big explosions, it sure doesn’t want to deliver a high-octane thrill ride thanks to confining players with its on-rails conventions. See, each mission played is comprised of segments where players simply control BSR through aiming her gun at each enemy and blowing them out of the water. Aiming, in this case, is critical, and is really the only kind of dexterous skill on which needs focused. Outside of mashing the fire button to lay waste to the hordes of baddies that populate the screen, there’s the ability to block, dodge and naturally, unleash super-charged attacks for big damage and kill counts, but these offer only minor variations in a game where players are asked to perform the same mundane task over and over, and then over one more time for good measure.

Regardless of how repetitive the game can become, nothing about Black Rock Shooter feels fundamentally broken. In all honesty, it has quite competent shooting mechanics and tight, responsive controls. The problem is these aspects are never fully utilized to produce an experience that feels especially exciting. If the player tricks themselves enough, though, they might actually enjoy the game perhaps more than they normally would. 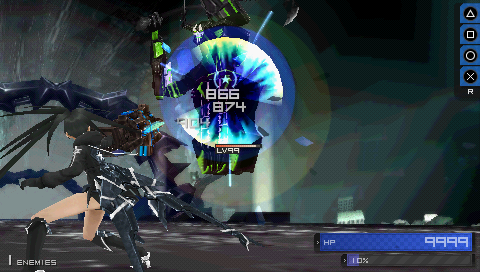 This trickery can be performed by paying close attention to the game’s presentation and production values. From this perspective, BRS:TG is slick. Its art style is satisfying thanks to the unique take on what could have been a very typical anime backdrop; and the graphics are shockingly crisp considering the PSP’s limitations and aging technology. Textures are clean, models animate well and the assumed intentional use of bright colors in conjunction with bleak environments allow certain characters and effects to pop with a fantastic sense of vivacity. To complement these appealing visuals is the guitar-wailing, metal-infused soundtrack that is endorphin-releasing and oh-so-sweet when combined with the rather heart-pounding boss battles and general debauchery players can incite throughout their playthrough.

Now, fans should know that BSR is a relatively short game, and one that is easily completed in well under 20 hours. However, there are alternate endings and unlockables to earn throughout the campaign, so the completionists of the world will certainly get more out of the title than those looking to just blow through the campaign. Some sort of co-op mode, either locally or through Wi-Fi means, would have done this game wonders — after all on-rails shooters are usually most enjoyed in the company of a buddy. Why this wasn’t included here is beyond me, other than figuring the game was developed on a strict budget and timeline. The anime and magna iterations of Black Rock Shooter are so enjoyable because they’re crazy, over-the-top Japanese awesomeness. Unfortunately, not much about the video game take on the series is all that awesome, or even very good. In fact, much of what makes the series so special is simply not present in the game at all. Sure, Black Rock herself flies around in cutscenes with her enormous gun and pulverizes the enemy with flashy attacks and a seductive style, but this merely doesn’t translate well when players are asked to actually play the game. As a result, Black Rock Shooter: The Game is only a mediocre on-rails shooter, and one that would have benefited greatly and made more sense as a free-roaming TPS a la Square Enix’s The 3rd Birthday. What we have, instead, is a restrictive experience that lacks merit or any particular qualities that are especially grabbing, barring the surprisingly vibrant graphics and totally rocking soundtrack. At the end of the day, it comes down to one statement: fans of the series simply deserve better than this.