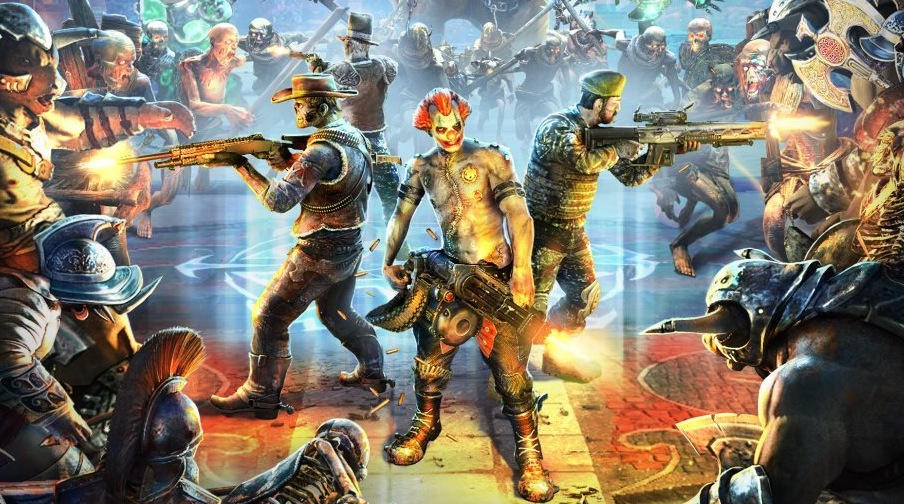 Shooting things is fun, and shooting tons of things with other people is even more fun. There comes a point in even the most arcade-y shoot-fest where you start wondering why you’re doing this, aside from the pavlovian response of feeling good when an enemy explodes. God Mode sits squarely at this point, offering endless waves of pseudo-greek monsters to pump full of lead but little else. It’s unquestionably fun for a while, and earning and upgrading weapons helps lengthen the play time, but it’s also as ephemeral as cotton candy. God Mode tastes nice for a few seconds, gives a good sugar rush, and then dissolves completely out of the system.

The basics of the game are that you’re dead, in Hades, and need to fight your way to godhood. You start as a level-1 shambling corpse armed with a spray & pray uzi and double-barreled shotgun, and as you blast your way through God Mode‘s fantastically rendered environments you earn experience and gold. Experience gets automatically applied, raising your stats in the usual way, while gold can be used to buy new weapons and secondary skills, upgrade either, or choose from a small handful of outfit options. 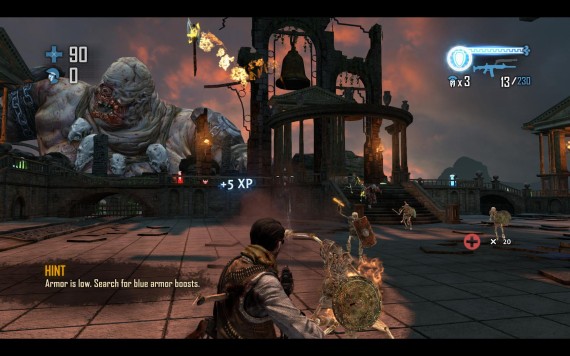 The whole of the game is the combat, and you’ll be shooting a huge amount of skeletons, minotaurs, floating spellcaster-things, and the odd giant shambling hulk. Most enemies charge blindly, while a couple of the ranged enemies are smart enough to keep their distance. Not smart enough to dodge incoming fire, of course, but God Mode is about mowing down thousands of dumb creatures rather than a careful duel of projectiles.

You can take two weapons and one special ability into battle, and once one of the five environments has been chosen you’re stuck with that loadout to the end. It’s not that huge a restriction, honestly, because once you’ve decided on a favorite loadout there’s very little reason to change. The weapon selection is solid, with new ones being regularly made available for purchase as you level up, and a few of them even require a little technique to be effective. The plasma ball is pretty handy once you master its arc, for example. Most guns work as expected, from shotguns to assault rifles and grenade launchers, but there’s a couple of oddballs in the upper tiers.

Once you’re armed, and have spent any gold on enhancing your loadout, it’s off to the arena. Each level is divided into multiple rooms, and in the center of each room is a statue that adds a modifier to the room’s combat. No health but regenerating armor, giant enemies, fog, party hats for all, all damage taken being inflicted on one character, and many, many more make it so that tactics need to be switched up at least a little bit between encounters. The available modifiers increase both as you bump up the difficulty level and add more players, making sure that there’s usually something new to shake up your strategies. Still, the only real strategy is “shoot everything!” 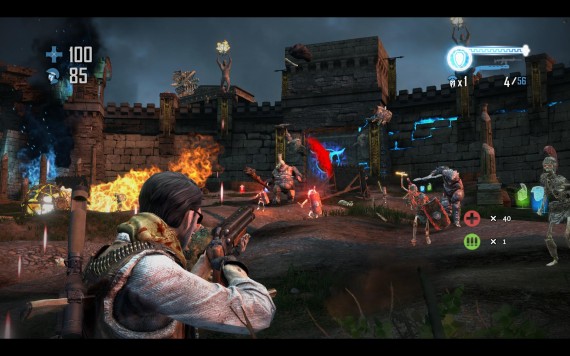 God Mode is a game that wants a quarter slot and a cabinet, preferably one of the wide ones that can comfortably fit four players. It’s possible to play God Mode in single player, although not particularly fun, but multiplayer works nicely. Getting a group of friends of working with a selection of random people can lead to some good times, if you coordinate your destructive output. Keeping the skeletons off someone’s back while they empty their minigun into a rampaging boss monster is always going to be a good time. God Mode may be a shallow action romp that’s got the longevity of a fruit fly, but with a decent group of allies and some proper teamwork, there’s a good bit of run & gun gaming in there while it lasts.