Star Trek is a brand known worldwide that’s even helped influence some of the real life devices we have today. It was a futuristic vision that many hoped the human race would get to in a couple hundred years from now. Digital Extremes and Namco Bandai are looking to convert what we love about the franchise into video game format, bridging the gap between the recent film reboot and the upcoming sequel. While most movie tie-ins never pan out for the best, with the extra development time, surely Star Trek will break the trend.

Unfortunately, there’s no way getting around this so I’ll say it out right away: Star Trek is a bad game. It may have everyone you loved from the 2009 film, but this is a downright poor attempt to capture the glory of the Star Trek name. Instead of focusing on quality, Digital Extremes focused on quantity, increasing the overall length of the campaign while shoving in multiple gameplay mechanics into an already bland experience. 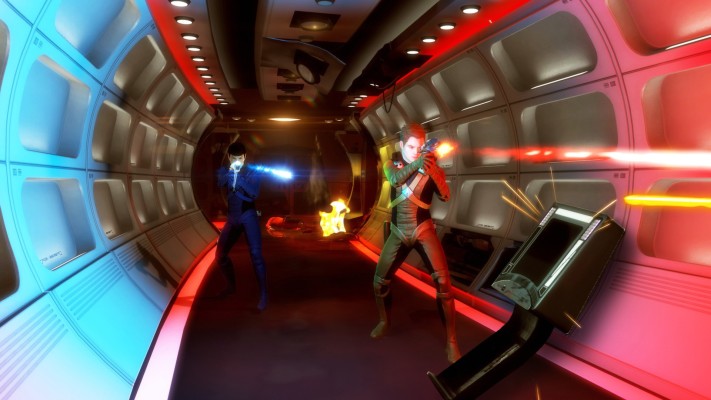 The best way to describe Star Trek’s gameplay is as if Uncharted and Mass Effect had a child; an ugly ugly child. This is a generic third-person shooter with no redeeming qualities other than that the Phaser sounds like it should. It wouldn’t be so bad if the game wasn’t so bloody unpolished, though. Star Trek is riddled with bugs and glitches such as moving through objects and people, not getting into cover, being stuck in a fall animation after performing a silent kill and sliding across the map like you’re on an ice rink, just to name a few. The traversal and climbing aspects are both slow and clumsy, and the shooting mechanics, while generally fine for what they are, gave me an unfortunate case of déjà vu from my time with Quantum Theory. I can’t go without talking about the hacking ability, either. There are three or so different hacking mini-games and each one can be entertaining until you realize there is one every two minutes. There is an ability that will help with this and in most cases the buddy AI will do it for you, but there’s a serious overuse and emphasis on hacking.

Star Trek’s story is actually decent in length when comparing it to other film adapted video games, clocking in at around eight hours depending on the difficulty. While that’s a good length for some, that’s eight hours of a subpar, mundane experience that probably won’t even appeal to the most dedicated of fans. What this shows instead is that Digital Extremes had bigger aspirations than they were able to execute on. Instead of completely focusing on one strong aspect, Star Trek brings in multiple unnecessary mechanics that are then spread out too thinly. For example, swimming is introduced late in the story, but feels completely thrown in and is a pain to do. Additionally, there’s a tool that can materialize and dematerialize your partner at will needed for solving a puzzle. Unfortunately, while that was an excellent idea, it’s used for a single instance poorly and is never seen again. There are so many onetime events that had potential for being good, such as piloting the Enterprise, but end up being a complete letdown. 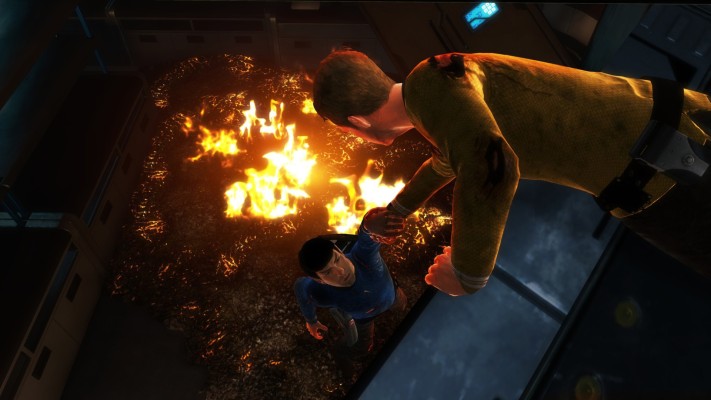 The story is laughably poor and it’s hard to tell if it’s just the overall plot, the scenarios you’re thrown into, or the characters themselves. Outside Spock and James T. Kirk, the lovely T’Mar is introduced, and you can tell she isn’t based on a real person as she her facial structure is that of an anime elf. The plot revolves around the Gorn; those lizard creatures well known in the franchise’s past. This takes place after the events of the 2009 film (and just before the next one, based on the ending) where the Gorn attack and take a power source that’s essential in creating a new home for the Vulcans. It’s now Kirk’s mission to retrieve the power source no matter the cost. There are a couple of decent set pieces, but they’re either over too soon or drag right into the standard firefight. It certainly doesn’t help that almost every scenario ends in the most anti-climactic way possible – including the ending itself. Outside the two main characters and their cheeky banter, most of the Enterprise’s crew doesn’t get much screen time, with the exception of McCoy and Scotty, who are both given a surprising amount of dialogue.

On a positive note, Star Trek does have cooperative play and I’d highly recommend it if you’re dead set on picking the game up. This is because the artificial intelligence is awful. Not only is your partner unintelligent, but the enemies are sometimes so stupid that they’ll charge right past you in order to get into cover. So many times did Spock run into the line of fire when trying to sneak around a turret (although regular enemies don’t seem to notice him). There wasn’t any situation that the ally AI helped, only serving to get in the way or get taken down so I could risk my neck in picking him back up.

Presentation-wise, the game is a mixed bag. Most of the film’s cast offer their voices and likenesses, but it’s only Kirk and maybe Chekov who actually are well modeled. There are also a couple of nice areas, but for the most part, low textures and bland visuals are spread across the world. It doesn’t help that animations are sloppy and helps remove players from any immersion they may have. It’s also worth mentioning that there’s a lot of repeated dialogue. The player will constantly need help hacking a computer or other tasks, and afterwards, the character will say the same exact line over and over again. You don’t know how much I wanted to turn off my speakers after hearing the “I couldn’t have done it without you” line for the twentieth time. The sound department is the only positive note; even though they use 2009’s main theme over and over again, there are some well-orchestrated tracks to be found. That said, while the main cast is Hollywood talent, most of the dialogue is spoken completely flat and void of any emotion or understanding to their surroundings. 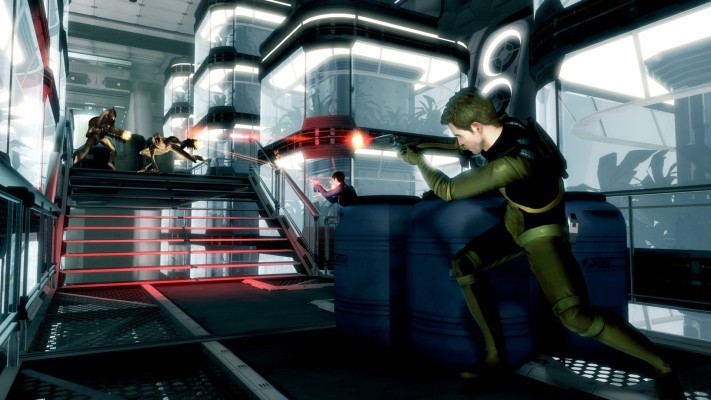 We’re only four months into the year, but Star Trek The Video Game is already aiming for worst game of 2013. It has some production values and I give it credit for not directly following a film, but it falls completely on its ass in every category. Generic shooting, incredibly poor artificial intelligence and glitchy bug-ridden gameplay amounts to nothing more than a meager attempt to cash in on next month’s film. We salute you for trying, but this is better left untouched and propelled into space.