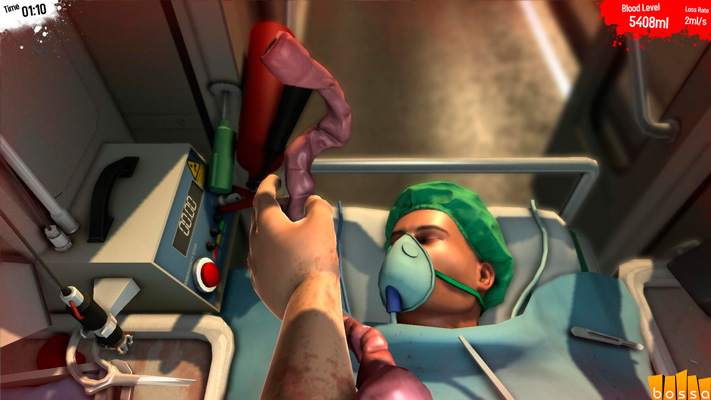 Surgeon Simulator 2013 is a bad game. It is an objectively bad game, and I know it is an objectively bad game. By nearly every single metric one can use to assess a game, Surgeon Simulator 2013 fails spectacularly. Incredibly awkward controls, ill defined objectives, and an absolute dearth of content do not sound like the ingredients for a good game. They don’t even sound like the ingredients of a bad game, as that combination is typically reserved for games that also qualify as crimes against humanity. And yet, for some reason, I found myself oddly enjoying this game at times without a clear understanding of why. The only real thing Surgeon Simulator 2013 has going for it is that it is funny in a dark sort of way and floundering around at even the most simple task is an entertaining thing to watch. This is enough for a while, as the humor does a decent enough job hiding the fact that you’re playing a bad game. Unfortunately, once that wears thin you’re left with a clunky and frustrating experience that really isn’t worth your time. 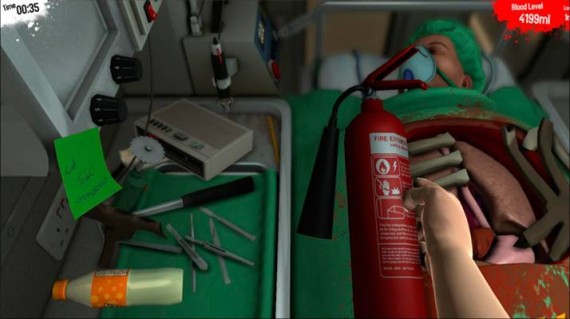 The developers advertise the game as a  “darkly humorous over-the-top operation sim game,” most likely because they knew that they couldn’t honestly advertise it for having entertaining or rewarding gameplay. The humor becomes apparent almost immediately, and the first surgery will most likely go about as terribly as you would expect a surgery to go if you were actually to perform it. This isn’t the type of game to offer hints or suggestions as to what to do or hold your hand along the way because open heart surgeries are the sort of thing you should figure out yourself anyway. It gives you a bunch of tools, a patient, and hopefully some substantial malpractice insurance. Not knowing exactly what to do, I figured I would try to remove the fabric covering his chest, only to find someone had already started by cutting him open and exposing the ribcage. Oh, also the cloth was now permanently lodged in my hand because the game had glitched out, so I spent the rest of the surgery trailing a big sheet obscuring my entire field of vision.

My expertise on what tools best cut through bone is fairly limited because I’m not a murderer, so I decided to grab what looked like a table saw because it seemed like something that might get the job done. And it might have been if in my effort to grab it I didn’t accidentally fling it off the table and onto the floor, permanently out of the reach of my character because he didn’t want to bend over. My quest for sharp cutting objects next brought me to the rotary reciprocating saw, but it was next to a bunch of other stuff and I accidentally ended up grabbing a needle pointy end first. So now, not only did I have a piece of fabric trailing my hand and no idea what I was supposed to be doing, but the whole screen turned into this weird, trippy blur because apparently the needle contained some sort of psychedelic agent.

Somehow things got worse after this. I thought that after I had thoroughly mangled his rib cage with a hammer, thrown both of his lungs on the floor, and dropped a working drill into his chest cavity that if I plopped the new heart in there that perhaps the game would give me some credit. It did not. You need to complete the surgeries without losing too much blood, and judging from the amount I lost, the doctor was now standing ankle deep in a pool of A-positive. A better name for this game would have been Murder Simulator 2013 as that was pretty much all I was doing my first dozen attempts through the game. The weird thing, however, was that I was enjoying myself. The seriousness of what you are attempting to do combined with an awkward control scheme creates this very weird comedic effect, and for a while I was just messing around with stuff to see what would happen. I’m sure that brain surgeries aren’t exactly the sort of situation you associate with hilarity unless you’re some sort of psychopath, but having your character clumsily stumble his way through surgery, knocking half of the tools and vital organs on the ground, and lazily dropping the replacement organ in sideways only to have the game tell you that you did a good job has this sort of dark humor to it that had me chuckling for the first hour or so. 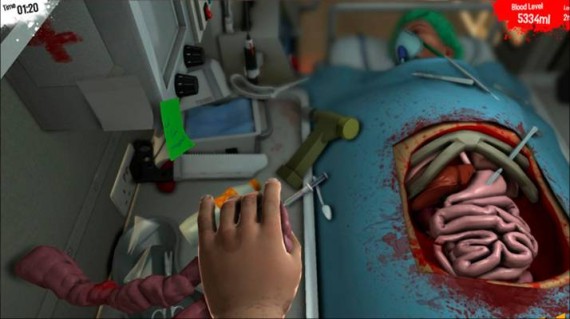 Unfortunately, once the novelty wears off the game doesn’t have a significant amount to offer. The big draw here is how poorly the game controls, and a lot of the comedy comes from your inability to do anything easily. You only have control of one arm, and based upon the way it controls it recently fell asleep. One mouse button lowers the arm, while the second rotates it. The fingers are individually controlled, and you need to close them to grab and hold onto objects. While this sounds relatively straightforward, it is often an exercise in frustration to get your character to complete even the most basic of tasks. It feels like you’re controlling a claw machine, and like a claw machine, you’re going to end up with the thing you want about half the time and a fistful of air the other half. Even when you do grab the item you want, you’ll most likely have it grasped in an awkward position, forcing you to twist your hand in a weird way just so you get the tool to the portion of the body you want it at. And then because of the angle they have the action at, your hand can completely obscure what it is you’re trying to do, leaving you pulling at stuff that is stuck for no discernible reason.

The game is also incredibly short, with only three operations to complete. Going back to try and improve upon your score gives some replay value, but this isn’t the kind of game that is well designed enough to make you want to go back. There is also an ambulance mode, adding more challenge to the operations by bouncing around and having random tools fly out the back door. And boy, is there nothing more fun than failing an operation because the tool you needed or replacement organ suddenly flies out the back of an ambulance for no reason. I mean, why the hell am I even performing kidney replacement in a moving ambulance anyway? This can’t be standard protocol. I’m beginning to suspect this isn’t a very realistic sim game at all! Even with the ambulance mode, there isn’t nearly enough content to justify the asking price.

Surgeon Simulator 2013 isn’t all bad and I’m surprised I liked it as much as I did. There is a bizarre sense of exploration you get from just goofing around and seeing what exactly you can do, and at times it feels like an odd sort of point and click adventure game, where every puzzle is to use a sharp object on a man’s face. There are a ton of fun little Easter eggs to discover, and I fully recommend goofing around at the menu screen for a good twenty minutes before you even start the game because there’s a lot of stuff hidden there. The weirdest thing about the whole experience is that Surgeon Simulator 2013 seems to know it’s a bad game. It knows its biggest selling point is the humor that arises from the awful controls, yet it embraces that and it makes the whole experience slightly more endearing. “Look how bad this is!” the game seems to say, encouraging you to laugh when you clumsily knock an entire tray of scalpels onto the floor and accidentally electrocute yourself. Unfortunately, the game really has only one punchline, and once you stop laughing at everything you do, you come to the realization that this simply is not a very good game. It certainly isn’t worth the price that is being charged for it, and you can get pretty much the same experience from just watching any one of the many YouTube playthroughs of the game. If you have the urge to experience this for yourself, just go play the free version online. It only has the first surgery, but you can get all the same laughs and won’t have the nagging sense that you just wasted ten dollars.