Note: Portions of this review appeared in our PS3 Review of Guilty Gear XX Accent Core Plus.

Deja Vu? Probably. If you’ve been paying any attention to the Guilty Gear series lately, then you’ll already know that Accent Core Plus was recently released on PSN and XBLA. So then what’s the difference between that title and Plus R? Well, quite a bit, most notably being the complete retooling of all 25 characters in the game. Aside from some added features and reworks coinciding with the most up to date version of the arcade game in Japan, though, this is still Guilty Gear. Meaning to say, Plus R is flashy, in your face and for lack of a better phrase, visceral. Its steep learning curve and fast-paced action make it a game that is hard to get into at times. In its inherent level of challenge, though, is a rewarding set of mechanics that knows how to gift players for the time and dedication needed to perfect the deeply nuanced fighting. At the same time, it’s also a title that can be enjoyed by a casual fighting game fan simply because, on the surface, it appears like any other fighter, and can be button-mashed to one’s heart’s content. Guilty Gear XX Accent Core Plus R builds upon all of foundation elements made great in the previous games to provide a rocking experience on the Vita. The core problem with Plus R, then, isn’t its lack of engaging mechanics; rather, the fact that it doesn’t possess the features one wants, and better yet needs, for a portal fighting game.

Up front, players will immediately notice that Accent Core Plus R is a quick, fundamentally deep fighter. Fans of the series, and those who played the game originally on PlayStation 2, will feel right at home with these hardnosed technicalities, since they have defined the franchise from the beginning, and essentially riddle Accent Core Plus R right down to its very, well, core. Exact, yet mind-blowingly long-winded input commands are mere commonplace in Accent Core Plus R, making this a fighter that requires hours upon countless hours to fully understand, and even more to master. The almost inconceivable amount of depth is impressive, and sometimes overwhelming, but is also the reason why the game has that very specific one-more-time effect on its players. 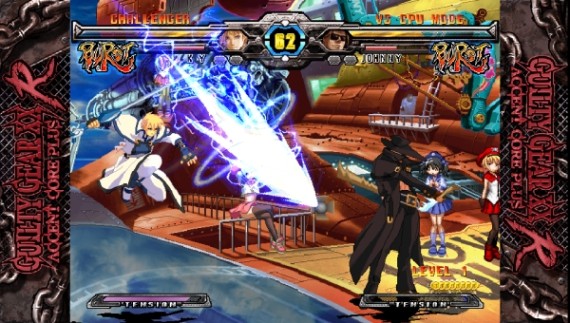 Even with the difficulty comparable to the likes of climbing Mount Everest with only wearing a pair of Happy Feet and rubber-gloves caked in slime, Guilty Gear XX Accent Core Plus R is somehow still accessible, and better yet, enjoyable for newcomers. Considering the fact that the basics of the game are actually manageable, Accent Core isn’t off-putting. In fact, it’s only over time that players may begin to see the full breadth of what the game’s fighting engine has to offer. This is excellent for newbies, as they may not be instantly demoralized or exhausted to the point of simply giving up when staring the mechanical complexities in the face. In this delicate balance, developer Arc System Works has bequeathed folks an experience that doesn’t come with a strict set of parameters on who and who can’t have fun with the game.

Being pick-up-and-play is vital to any game that has a multiplayer component. Regrettably, Accent Core Plus R only offers local head-to-head modes. Making the situation worse is the lack of a replay feature. At least the local multiplayer goes off without a hitch, and is where most of the competitive fun will take place. Unfortunately, I think it’s easier to find someone with a Virtual Boy laying around than a Vita. So the inclusion of local play feels rather moot.

There’s more to Accent Core Plus R than just its multiplayer and standard arcade components, though. In fact, the game includes the return of Mission mode, along with several fresh features including new Gallery, Survival and Story modes, the last of which is a continuation of the storyline from the original Guilty Gear XX, and features over 350 different scenarios to see, thanks to a multitude of branching plot paths. Needless to say, there’s plenty to do in Accent Core Plus R. 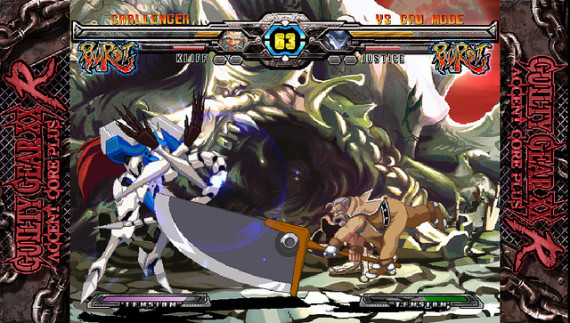 Aside from the rock-solid gameplay and modes, Guilty Gear games have always been gorgeous works of anime art. Character models and backgrounds are hand drawn, and some of the best sprite work in any game cut from this rug. To top it off, animations are bombastic and despite the pleasing visuals, the game’s frame rate rarely hiccups. This all is made infinitely better by a cast of brawlers that look and play diversely. To be honest, part of Guilty Gear’s appeal are the personalities. Arc System Works is known for crafting fighters with wonderful characters, but that trend came into existence thanks to GG. In Accent Core Plus R, Arc’s work is at its pinnacle; there’s no better way to describe the roster than simply bad ass. From the fighters’ designs, to the way each one animates and maintains their own unique sense of style, Accent Core’s character gallery is at the top of the class.

On the topic of quality production design, every Guilty Gear game, including Accent Core Plus R, features a wicked soundtrack wrought with some of the most head-banging metal around. Rocking ballads with wailing guitars and pounding drums fit the bill, and make each fight feel all the more intense and adrenaline rush-provoking. The awesomely perfect mashup of over-the-top anime with hair-whipping metal makes for a true, one-of-a-kind experience that really isn’t available in most other fighters.

Exclusive to this Vita iteration is the reworking of the entire roster. Character’s have been nerfed (Justice and Kliff especially), styles have been altered and generally each one feels a bit different than they have in the past. This essentially equates to new learning opportunities for even the most devout Accent Core enthusiast. These changes were put into place to better balance the gameplay, and from our time with the title, that certainly seems to holding water. Interestingly enough, Accent Core has historically been a balanced game pretty much by design; Plus R simply refines it further, which is impressive. Who knows how long their efforts will hold up, though, once fans get to delving into the deep mechanics.

The other most prominent change in Plus R is the lack of an online component. That’s right, despite the developers saying such a mode would be present in the final product, there is no online competitive play. Worse still, there’s no cross-platform functionality whatsoever with the PS3, which is truly head-spinningly absurd, maddening and damn near criminal! This one exclusion from the game makes Plus R completely irrelevant for those who already own the game on PS3 or Xbox 360. Other than practicing on-the-go, we can’t think of a single reason why gamers should purchase Plus R if they bought Accent Core Plus a few months back. 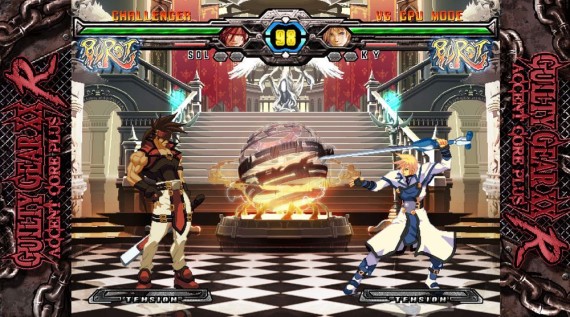 Guilty Gear Accent Core Plus R shows off just how good the original game’s design was; it’s been almost four years since the title was first released, and it’s only gotten better with age. In that regard, Plus R is a solid fighting experience — one that has enough accessibility to hold the casual gamer’s attention, while also offering a baffling myriad of complexities to tide over the hardcore fans. Its mechanics, its mode, its style and presentation are all top notch. It’s only in the lack of online play that Plus R falters. Unfortunately, if there’s a place to drop the ball, that’s not the place to do it. This is all the more cringe-worthy when considering the fact that online play was promised to be included by the developer. In the end, if you already own Accent Core Plus on PS3 or Xbox 360, we can’t find a good reason to pick up Plus R. Moreover, if you love testing your skills against others online, this game isn’t for you, either. If you like playing fighters by yourself, huddled up in a corner in some depressingly dark room, then sure, Guilty Gear Accent Core Plus R is the thing for you. It’s just a shame that such a terrible, terrible decision can hold back such a wonderful game.