I want to have been in the Ubisoft board room when Far Cry 3: Blood Dragon was pitched. I can see it now…the game’s director standing at the end of an immaculate glass table, with excitement in his eyes. His smile stretching almost as high as his glasses as he struggles to not just run through his pitch live a hyperactive child telling you about sharks for the first time. I imagine it was at about the time that he started talking about blood dragons, and the ability to shoot lasers from their eyes that some eyebrows in the room began to rise, be it from curiosity, or just disbelief. In either case the game was made and I get to review it.

Blood Dragon is a retro fueled run through your memories of ’80s movies pretty much from the start. It’s got Michael Biehn doing the voice talent of the main character, and Power Glove doing the soundtrack. When you combine Kyle Reese from Terminator with a band that makes grimy synth music, you’ve got a recipe for success. What’s also cool are the little nods to all the movies that inspired the game. The pistol is definitely the semi auto beretta that Murhpy AKA Robert Cop AKA Robocop sports; and the shotgun is the sawn off from Terminator 2: Judgement Day. He even does the cool spin reload thingy from T2. In fact the game borrows the most from the Arnie flick. If it’s night time, you get a slight red tint and scan lines added to your cybernetic vision, which is also a big nod to T2 (At the time of writing someone has also pointed out that the laser rifle is the rifle of the resistance in the beginning of T2.) 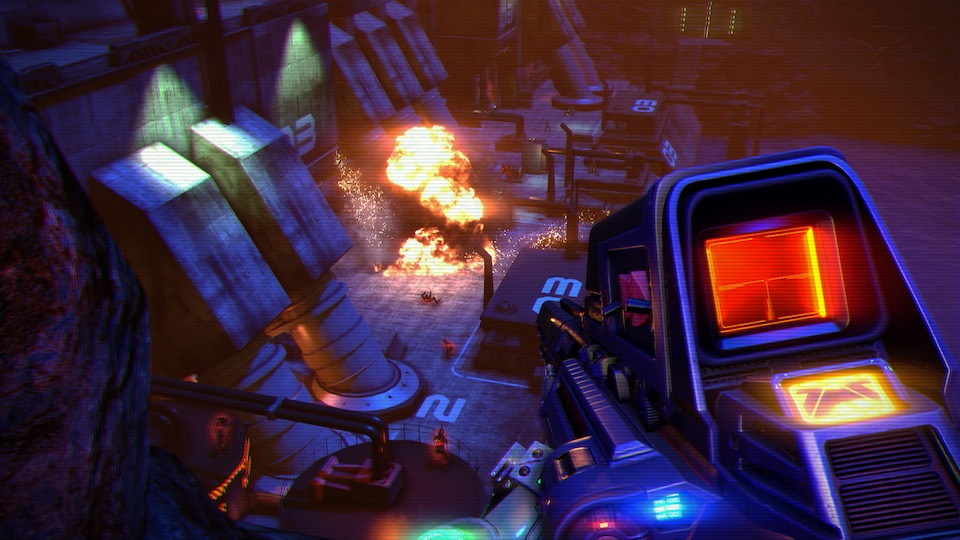 With so much nostalgia pumping through this thing, you might think it’s all flash and no substance. Fortunately, the game is built on a winning framework to start with. Far Cry 3, after all, was the game that allowed you to shoot bears in the face with a rocket launcher. So the pedigree for excess and violence exists in spades. That’s a good thing, though; here these things are on display and amplified to a factor of ten. Animals? Sure. Try a cyber panther on for size instead of its boring domestic version in Far Cry 3. In fact, expect cyber, and robo variants of every animal EXCEPT bears. (Seriously guys, what the hell?) This is just an illustration of the silly ways that Blood Dragon “goes to eleven” to deliver action and laughs.

It’s good fun though, and just like older brother Far Cry 3, Blood Dragon is built on a system of logical progression and unlocks. There’s still substantive rewards built on the elegance of experimentation, just re-branded. Quests? Adventures. Outposts? Garrisons. Completing these things still gives you weapons and upgrades, just in much more amplified and over the top ways that better reflect the game’s personality. You can make that sawn off have four simultaneously firing barrels. You can turn your ordinary SMG into a laser rifle. C-4 is C-400. Blood Dragon revels in and succeeds because of this excess. 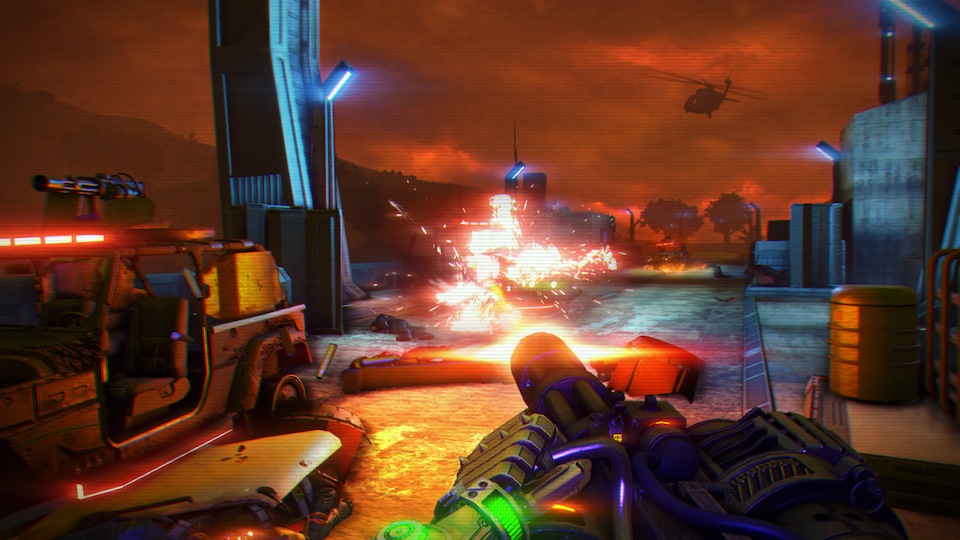 This is most visible in the form of the Blood Dragons themselves. Imagine a neon glowing predatory dinosaur. OK, now imagine that the dinosaur you just conjured up can shoot lasers out of his eyeballs. That’s what the hell a Blood Dragon is. It is now the most badass enemy I have ever encountered in a video game to date. I mean, sure there are bosses that have made me run cold with fear, but there’s the expectation that those things are going to be mean and nasty and huge. Same to be said of any enemy in a horror, or survival horror game. I know there’s going to be something totally screwed up around the corner; that is why I signed up to play that game in the first place. In fact, when a survival horror game presents me with a mundane enemy I lambast it for doing so. Here, the Blood Dragons are just part of the everyday wildlife, and you have to deal with them often. So you’re consistently chased and almost eaten by these bastards.

You can get them off your back easily enough, though. Just go through the gruesome process of tearing your enemies hearts (cyber ones) out of their chests, and throwing them as bait for the hungry, hungry, dragons. Crouching also works provided you break the line of sight with the beast. Seems that constantly shooting lasers out of your eyes is a sure-fire way to give yourself a serious case of myopia… Playing with the Blood Dragons in this way can be seriously entertaining. Especially if you want to “sic em” on some bad guys at a moments notice; just toss a heart on an unsuspecting bunch, and you’ve got yourself an impromptu Blood Dragon Birthday Party, complete with party favors. 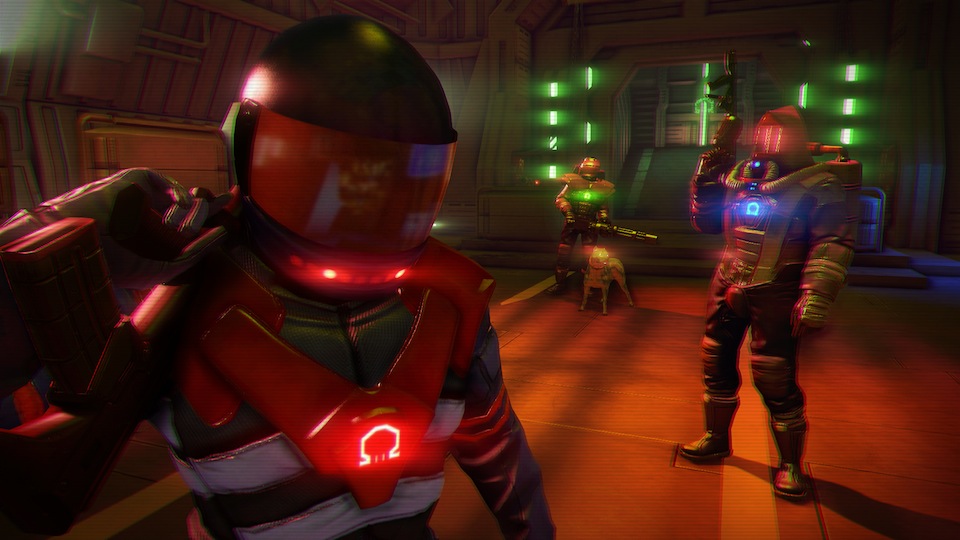 Garrisons can suffer your Blood Dragon wrath as well as anything else you tag with a Cyber Heart. Usually there’s a shield that you’ve got to disable with explosives in order for your new dragon friend to really dish it out, but they can still laser the hell out of everything from behind the field. Take that shield down though, and oh boy. That little twist and extra layer of strategy makes things refreshing and varied on the island while providing you with enough flexibility to not wear itself out.

Blood Dragon is a terrific “bad” game. I hesitate to call it great, because it’s not great. It’s actually very loud, brash, and stupid; but all of those things are handled in a great way that adds up to a very fun game. This is a game built out of Far Cry 3’s DNA, and no matter the amount of high gloss neon or campy dialogue, this game can’t escape that. The same problems that plagued Far Cry 3 exist here (albeit, less frequently, simply because of the reduced length and scope of this game). If you find yourself completely covered in flames, the timing on the button holding prompt is downright brutal. It’s still got some crazy pop in issues with vegetation, and the AI for enemies and animals can be absolutely psychotic at times. Do any of these things deter from the game itself? Well, like Far Cry 3, they’re annoying things that could and should be ironed out in updates, but they aren’t enough to break what works. There isn’t a moment in Blood Dragon that the fun doesn’t completely overshadow the rough edges and make you forget about them. If that moment does happen for you; there’s always the you-seriously-can’t-miss-this montage toward the end to stick around for. 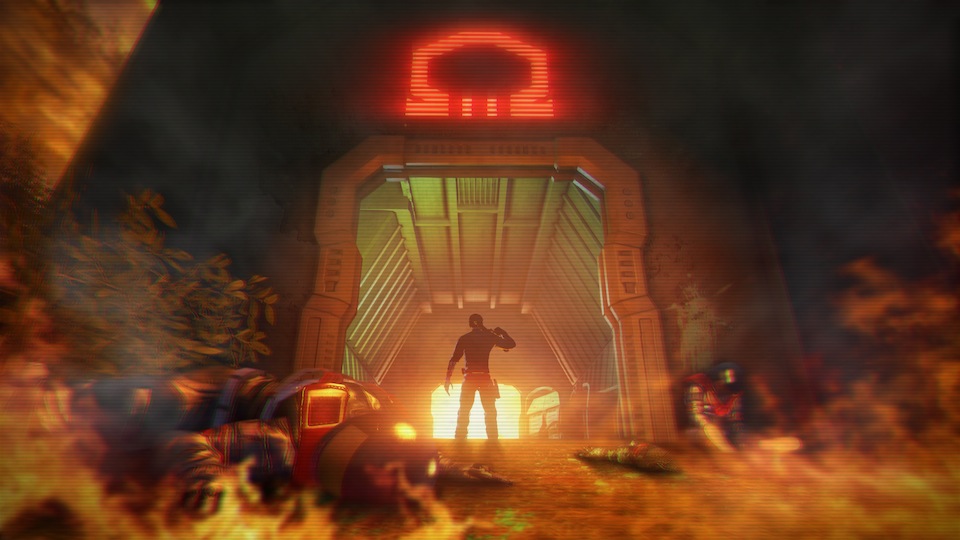 It’s a shame the experience is so brief, but because this is an arcade title that only costs fifteen bucks to scoop up, it’s a nice amount of depth and a completely absurd amount of fun. It’s just funny that this may turn out to be one of the better things released this year and it started out as a joke. Far Cry 3: Blood Dragon proves that the craziest ideas can be handled with enough craftsmanship to make them legitimate competition to the dearth of safety in the industry today. I wouldn’t be surprised if weeks from now, after the (probably) high sales figures, and the (likely) great reviews, that someone — probably on a site like this — will be talking a sequel. Unless you count that last sentence, in which case I suppose I’m the first one to say it. If none of those things are enough to sell you, there’s always the fact that it has Michael Biehn in it.