In today’s world where the likes of Fallout, Skyrim and Mass Effect offer the player a whole host of choices when deciding how to continue their journey in lush 3D worlds, it may come as a shock to many to believe that once upon a time, people were content with multiple choice adventure books where all you had was your imagination for graphics and your User Interface was nothing more than a pencil and some paper. The influence of these adventure books can be widely seen in the industry with even the recent Walking Dead game having many shades of being an adventure book.  That brings us to Sorcery!, a Fantasy RPG IOS game by Inkle Studios based on Steve Jackson’s adventure books released in the early eighties that seeks to merge adventure books of the past with the modern age.

You play as Analander, the hero of Analand, one of the many regions that make up The Old World, and the former possessors of the Crown of Kings, a powerful artefact which has recently been stolen by one of your rival regions leaving Analand open to invasion. With other heroes having either died or come back broken, it’s left to you to traverse the various trials and tribulations that lay out ahead of you and save your people.  The world of Sorcery! is portrayed via simple yet effective graphical design in which the player’s avatar is a 2D shape that can be moved via touch across the beautifully designed map to access various events and potential paths. Once activated, these events open up a wall of text (occasionally with an illustration to add some flavour) which then offer the players multiple choices. Be warned however, that you must choose carefully because you will often find yourself in an unwinnable scenario if you make bad decision, like deciding to walk through a field of strangely enchanting black flowers that will ensnare you for eternity if you aren’t careful. Thankfully however, you are able to go back to previous checkpoints allowing you to take a different path if you so choose although most likely you’ll stick with your decisions unless an unwinnable situation occurs due to just how engaging and interesting making bad decisions can be. 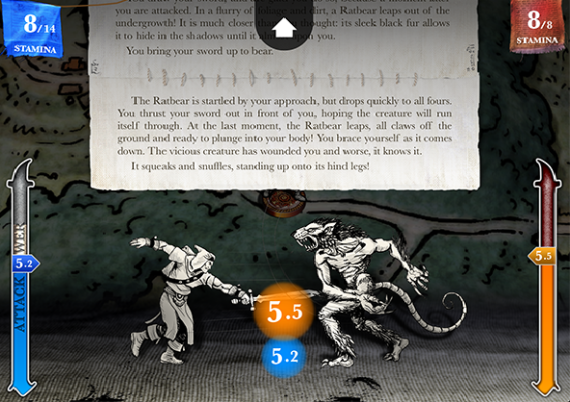 Playing through the game, it becomes clear to see just how well suited adventure books are to the iPhone platform with seamless gameplay throughout that effectively blends the line between interactivity and literature. Considering its history as an adventure book, writing is obviously key to the game and it must be said that it doesn’t disappoint, offering a high standard throughout that engages the player from the first word and doesn’t let go taking them on a whirlwind and enthralling adventure that goes to show that graphics and technology aren’t everything. When it comes to combat, the player is presented with a 2D graphical representation of the combatants from which they can move Analander to the right or left to choose an attack or to defend. Despite its simplicity, combat is strangely engrossing and you’ll feel your heart begin to race as you fight a close battle against the inhabitants of The Old World.

You also have the option of casting spells which uses a unique system adapted from the original adventure books in which you have to memorise the name of the spell which you wish to use and put it together via matching the letters needed.  Although powerful, the spells take away stamina which serves as your HP and thus you will need to choose wisely when to use magic and when to stand and fight. The system for casting magic is very enjoyable and you’ll feel truly powerful when you experience success but a drawback is that if you forget what spell to cast when aligning you have to exit the combat and scroll back to your spell book before returning back to the alignment screen.  Doing so is time consuming and removes some level of immersion within the game which is a minor annoyance for a game that is otherwise so effective at immersing the player within its world. 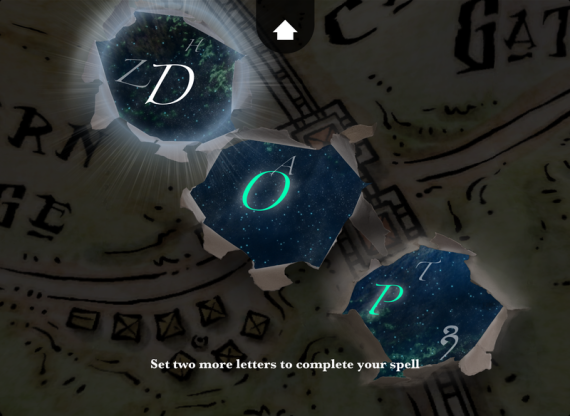 Sorcery! is one of the best games that this reviewer has played on the iPhone and iPad, offering a plethora of options and an excellent story. The flaws present in Sorcery! are so minor that you’d be hard pressed to find anything that truly detracts from the experience. As the first episode of four, it can only be said that Sorcery! is a magnificent start for the series that deserves your full attention as a game that punches well above its weight and puts many AAA console games to shame with its riveting and engaging story. Sorcery! is an experience well worth your attention, and at five dollars, there really is no excuse to miss it.