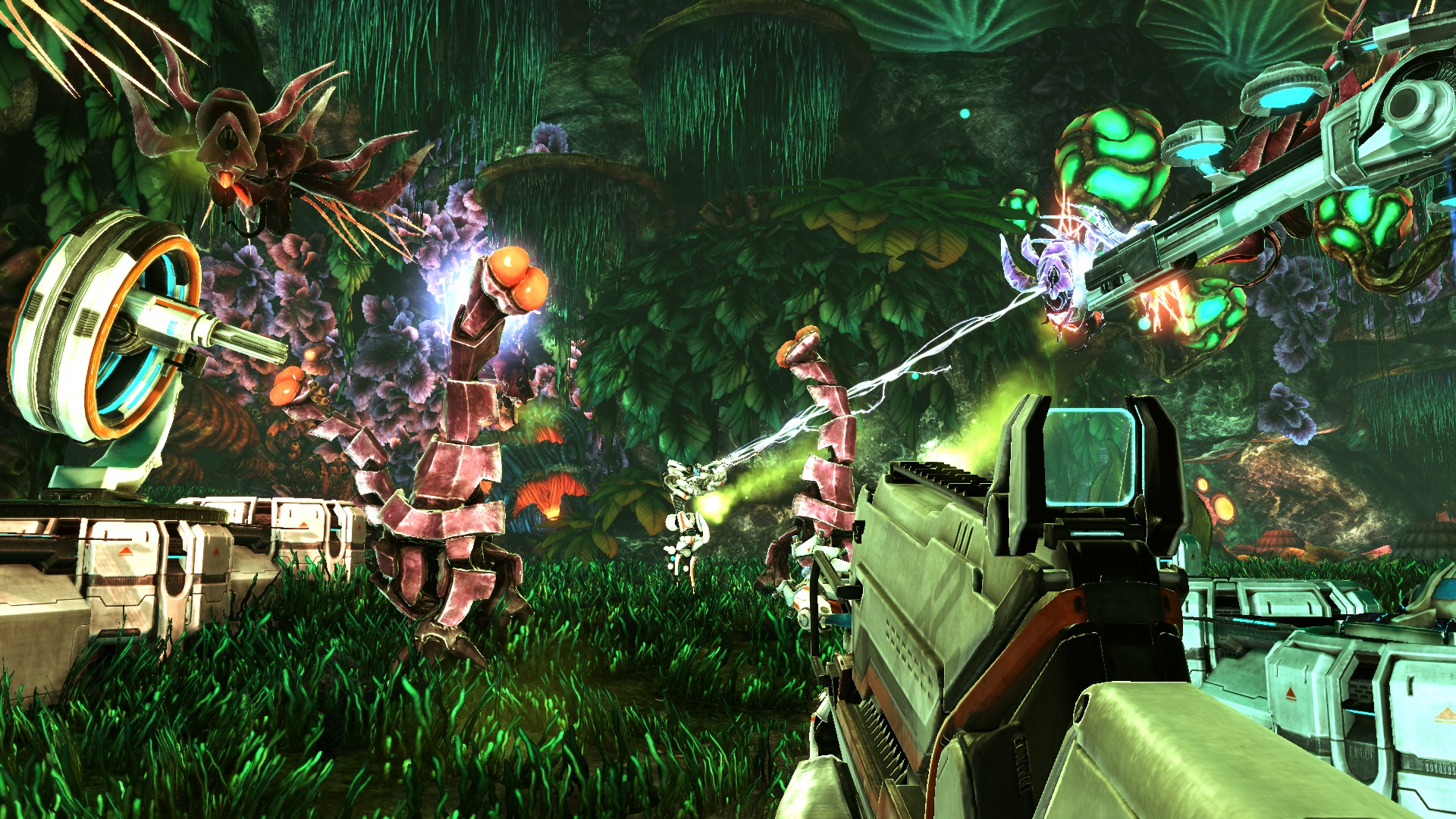 Tower Defense games are in a weird transition right now as a genre. On one hand, it’s probably never been a better time to develop and publish one, but on the other, the space is crowded, and there is only room for so much treading of the same territory. Necessary inventions and innovations like putting the character on the ground, for example, have made these games relevant again in new ways, but the fact remains that the novelty of that is wearing thin. Sanctum was one of the early adopters of the First Person Tower Defense game, and produced a solid and intensely challenging game within that framework.

Here it is almost two years later, and Sanctum 2 is out. Crafting an expectation based upon the result of the first product is a requisite evil these days when you talk sequels. It’s a chore really, because it means that a suspension of that sense of expectation is the only way you’ll really see the follow up for what it is. However, since I deal primarily in reality, that’s not entirely possible with video games. Bearing all these things in mind I turned my attention to Sanctum 2 and gave it a spin.

Your own experience with Sanctum 2 will probably be unaffected regardless of whether you’re coming into this a newcomer, or a returning veteran. That statement can be applied to either the first game, or Tower Defense gaming as a whole because Sanctum 2 does a stellar job of explaining it’s mechanics for both scenarios. While it may not be a critical detail for those who are well versed in the mechanics of this game, it immediately gives the sense of craft and attention. There is also more choice from the outset, with additional characters and a new loadout system. In addition to carrying deployable turrets and guns, your characters can now earn perks and extra carry slots to enhance their abilities, or the amount of towers they can carry.

When the gameplay itself starts it is basically the same gameplay from the first game. The setup and objective is fairly simple. You have a large open area, and a spawn point for the enemies. The enemies will flow in linear paths toward your core. You must protect the core. If you fail to protect the core, you will be shamed by your elders, and they will make you put hot coals in your underpants. That’s unpleasant. So naturally, you do everything that you can to keep that from happening. This means building walls, and putting towers on them to shoot the things that want to eat the core. Since it’s an FPS game at its core, you’ll spend all your time on the ground, and have to build from that perspective. There was a challenge in the first game of not really being able to see your “grid” from a bird’s eye view to really be able to plan properly. While there was a really terrible bird’s eye camera, it was really terrible, and didn’t particularly help anyone ever.

This is where the changes really start showing in smart ways. Now instead of an arduous camera that doesn’t help anyone, Sanctum 2 has a nice and tidy grid map in the top right hand corner. This means I will always know where the weird little bug things are coming from, and I’ll be able to see my obstacles, and towers in a way that allows me to understand why and when things work and fail. Part of the problem with the first game was that it was nebulously punishing, and made you live on a razor’s edge while playing it. Every choice became entrenched in granularity on higher levels and made surviving a sort of zero sum thing. It wasn’t exactly pleasant so much as it was nerve wracking. Again, these things only cropped up in later levels of the game, but it was there to be certain.

Resources have also received a sort of overhaul in that the game just drops a set amount of supply for you to utilize, breaking up barricades and towers into separate categories. Credits are no longer a shared currency required for barricades and towers. Instead you just get a certain amount of tower credits, and a certain allotment of barricades at the end of each round. It may not seem like much, but taking away the weight of the decision of spending money on barricades really does make the game better, as you’re free to spend more thought on strategy instead of playing accountant on the battlefield. This is also largely because on the field weapon upgrades have been given the ax. See in the first Sanctum you had towers, barricades, and weapon upgrades that you had to spend credits on. All of these things operated on the same currency, meaning that you could spend wrong and die. This would happen often. Nebulous I say. Weapons here are a different beast. Your characters each have their specific primary weapon, and you can unlock and carry other guns as the game progresses. While I personally never grew tired of the shotgun, invariably using it more than my primary weapon, there is a bevy of weapons.”The sniper rifle, and the triple lock split missile launcher are also stand outs but really, that shotgun is some good gravy. Additionally, though the field upgrades are gone,  you can still tweak and improve your weapons through the smart use of loadout perks that can affect the behavior and damage of your guns. These perks can also affect yourself, or your towers; but with the removal of upgrades, it would be smart to use the perk slots for more offensive purposes, but to each their own.

Other improvements in the game are minor tweaks and additions that keep things refreshing and new in smart ways. You’ve got AI squaddies that will assist you now. While they can take about as much damage as a dandelion, they still try. Weapon damages are tweaked, enemy damage values and health have been tweaked. Bosses have been added, maps are varied and consistently intelligently challenging. To top it all off, the game looks gorgeous and is really brought to life by its high gloss neon art style. A style that has clearly taken cues from ’80s futurism, and the Anime from that era.

Sanctum 2 is a rare representation of a game that was developed with an open ear. When Sanctum was released in 2011, it was a great idea that wasn’t without flaws in the structure of its design. Here, Coffee Stain Studios have taken the time to improve upon every mentioned or perceived flaw, and produced an indie gem polished in the fire of scrutiny. While Sanctum 2 is still a tough game, it’s tough in smart substantive ways that add up. Opting for this instead of the punitive approach that Sanctum was built on has made for a far superior product in the form of Sanctum 2.