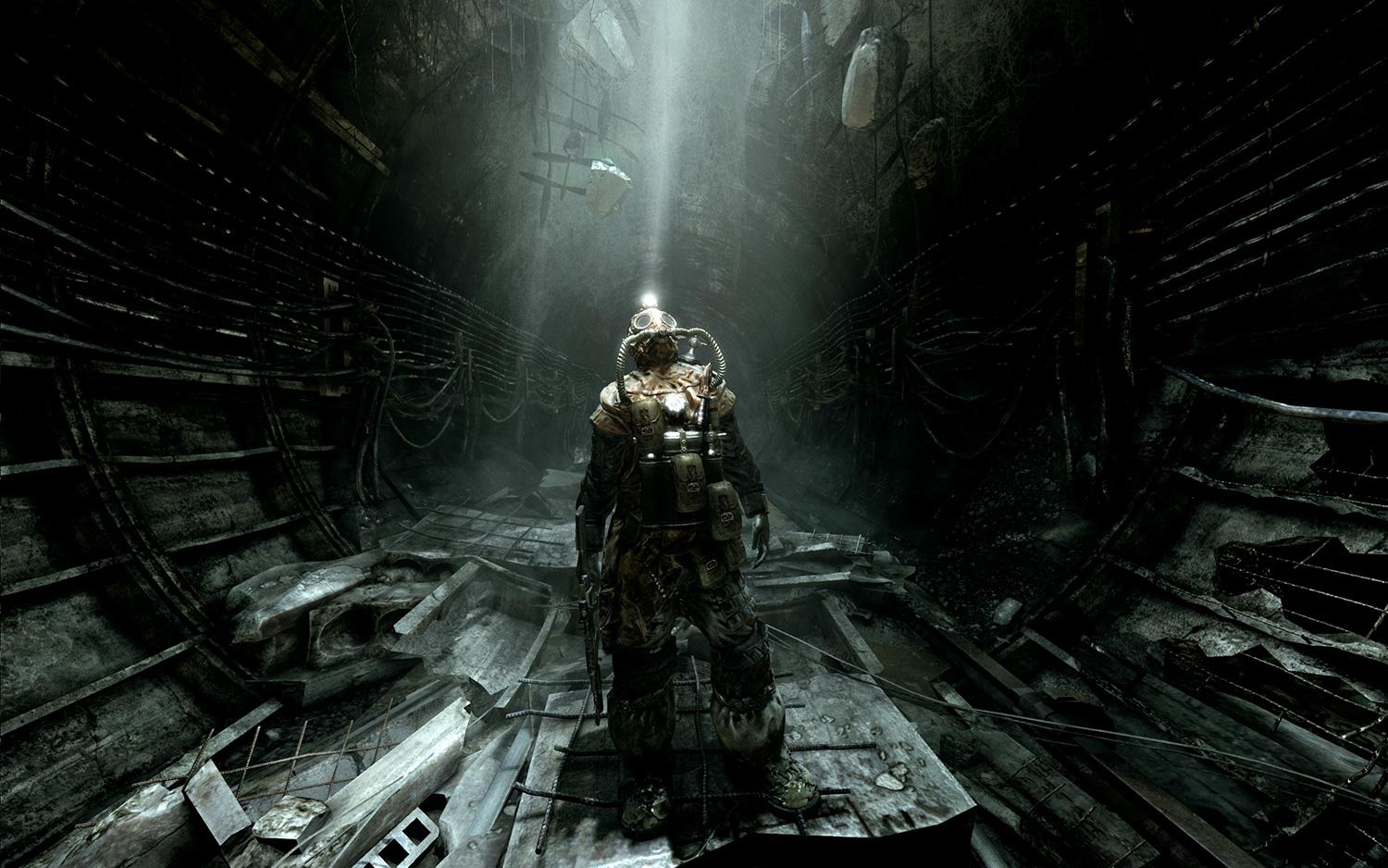 After a lot of drama due to THQ’s turmoil, Metro: Last Light has finally been released. In a way, its timing is perfect since so many have been able to enjoy the original game due to its super-cheap Humble Bundle offering, allowing anticipation to build for many in a fairly organic way. Last Light follows up on 2033 by using its bleakest ending and continuing from there. It’s a bit of a downer to start with the world essentially destroyed and have folks struggle to survive in train tunnels, but it’s kind of hard to have a post-apocalyptic story without something like that happening.

The opening sets the mood marvelously by showing Artyom’s journey from childhood to now, and how his most important goal is just to be able to remember what his mother’s face looks like. It’s a very simple, but profound, motivation and one that should really drive the story home to anyone who’s ever lost a parent. Last Light continues the dark and disturbing tone and look of the first game, with the same kind of morally ambiguous characters and turns. For an FPS franchise, it’s very story-driven, and this kind of approach is perfect for those who don’t just crave more mature plots in games, but also want to see games use the first person perspective to envelop the player more into the game.

In very little time, you’ll be able to not only care about each character, but also have fun at some of the sillier moments — like being given a ton of exposition early on, and you and your comrade being scared of spiders. Granted, they’re fairly large, but still — the sight of a battle-hardened warrior becoming scared around them is hilarious. There’s also some comedy in the form of enemies occasionally not spotting you despite you not being right next to them, but also standing…and brandishing a variety of weapons.

Those moments are few in number, and for the most part, Last Light requires a bit more strategy than most FPSes out there. There’s a fairly notable stealth mechanic at play where darkness and the shadows in general are your friend. There aren’t many lights in the metro, but those that are there should probably be taken out whenever possible if you have plenty of ammo. Bright light makes you easy to spot and leaves you open to attacks. However, against those giant spiders, it’s useful because they’re afraid of it. The AI is fairly smart, which makes stealth tougher since you won’t have much time to take out a foe with a quick stab or throat slash. The faster you kill an enemy, the more ammo they’ll have left to drop, which means you’ll be better equipped for the larger setpieces that pit you against at least half a dozen enemies in a confined space.

Weapons can be modded, although not quite to the degree of the Borderlands series. Being able to swap between three guns at any one time helps keep the action fresh since some guns are better for a situation than others. If you’re in a big battle, automatic weapons may be your best bet since you can take out a few people quickly, while one-on-one battles are better suited for lower-powered guns or a blast from a shotgun to get through. Pre-apocalyptic bullets can be used in an emergency to dole out a lot more damage, but are better served being held onto since they work as currency and can get you some better mods and weapons.

There’s a careful checks and balances system throughout every part of the gameplay and it kind of weaves itself into the narrative too. Everything’s a shade of grey and no one is exactly how they appear on the surface — much like real life. There’s a nice flow to everything with slower story-driven sections leading to faster-paced ones before slowing down again to something relaxing, and the few moments you have to explore can yield more ammo, weapons, or notes from enemies about their motives. The notes are a nice idea, but would be more engrossing if they were all written by hand rather than appearing as purely typed documents to further suck you into the world. It’s a minor issue, but one that stuck out while playing through the campaign.

Unlike most FPSes out there, Last Light doesn’t have a multiplayer campaign or multiplayer of any kind. There hasn’t been much of a controversy around it, which is good. The game relies so much on tone and really isn’t about mayhem and carnage even though there’s plenty of it on display. The developers clearly wanted to tell a good story here, and unlike Tomb Raider, or other games that have them but water down the overall package by tacking on an outsourced multiplayer game, they just decided to deliver the best overall single-player product possible. It’s a case of addition by subtraction, and by not including a superfluous feature, the game is better for it.

Visually, Last Light is impressive on the whole even if it is really held back by faces looking rather poor. Beards look tacked on, hair has a strangely plastic sheen to it at times that is just bizarre given the setting, and bare flesh doesn’t look so hot in general. Things look better when intricate designs are needed – like super-short haircuts that show off each blade of hair in a convincing enough manner close-up. Scars also look pretty awesome, with a good intent for major ones on both faces and hands – as you’ll at one point with an enemy’s hand going through a grate, where you can slice it with your knife to mess it up a bit. The environments are the star of the show, with a ton of detail in each one and most of them looking great. There are a few muddy textures, but not too many, and for a game set either in the depths of an underground train station or a fairly destroyed area above-ground, there’s an impressive amount of variety in the terrain and it helps avoid the sameness seen in many other games even with darkness permeating so many areas.

Last Light‘s soundtrack is full of somewhat creepy-sounding slow music. It’s bleak, a bit distressing, and very awesome. Everything has a dark classical music sound, and it fits not only the Russian setting, but the tone as well. It depresses you a bit hearing it and that works hand in hand with the narrative to keep you sucked in. There isn’t constant music though since it’s a very dialogue-heavy game, and that largely sounds good. While the lip syncing is pretty bad, the voice acting isn’t. Pretty much everyone plays their roles with conviction and takes the subject matter seriously – the only exceptions to the great VO work are some of the side characters, who just say some things, and they fit fine with “generic character #1,” but don’t hold up as well as the main roles that are all acted very well.

Metro: Last Light follows up on 2033 by giving players more of what made that game great, while improving the visuals and reducing the amount of glitches and performance hiccups. The story is captivating and the tension built up through a world that is bleak and downright bathed in darkness works at keeping you glued to the screen. Anyone who loved the first game, but wanted it to perform better, should give this a shot and those who missed it don’t have to worry about feeling lost — the opening cinema catches you up to speed quickly. Even though it’s atmosphere heavy and fairly short, its unique world and gameplay pull you in like most shooters don’t.