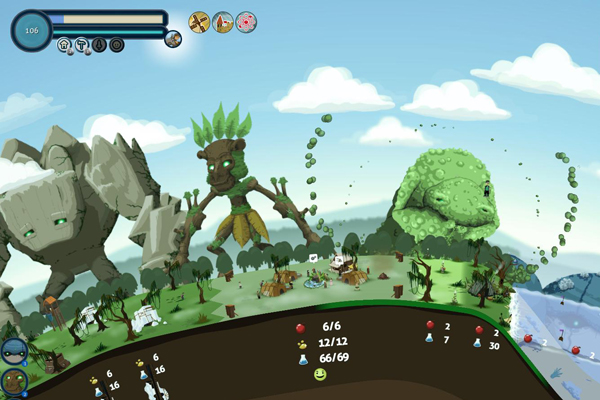 The planet is almost completely dead, just a round lumpy circle of dry rock. No life, nearly featureless, and doing little more than taking up space in a grey kind of way. This won’t do at all. With an effort, it conjures up a colossus that can begin the work or terraforming the planet’s surface. Plants, animals, oceans of fish, forest and deserts, elemental giants, and those ever-troublesome humans cover the planet’s skin, reviving the world into vibrant life.

Reus is a god game where you control four separate giants with various nature aspects, viewed on a 2D side-scrolling spherical planet. Ocean, rock, forest, and swamp all have different abilities that can effect each other in surprising ways, and the key to advancement is to combine their miracles into the most resource-effective output, depending on each town’s goal. The systems can get complicated fast, but a little poking at it will reveal an underlying logic that may take a bit to untangle, but yields some nice results in terms of planetary development.

First, though, you need to terraform. Each giant has its own ability to create a different landscape. Ocean is necessary to add water for the forest and swamps, but the rock giant can drag mountains from the planet’s crust, creating deserts on either side if you feel like generating Dune. Once you’ve got some non-wasteland terrain you can then plop down a few resources and the people will create a village. Resources are divided into three types- plants, animals, and minerals. The kind you get depends on several factors, the most simple of which is the giant that creates it. Water giant can make domestic animals, Swamp is good for more exotic beasts and plants, and Forest specializes in food-type crops, and the Rock is in charge of minerals. And then things get tricky.

Each resource has aspects such as food, tech, and wealth, and they can be evolved into stronger forms. The giants can bestow aspects on resources that allow them to change into completely different items. Hit blueberries with the Fruit ability and it can be transformed into an apple tree, for example, but most of these powers need to be earned.

As the towns grow, they start developing projects that dictate the needs of the area. A granary will require a certain amount of food, or a school needs tech. Each town will have one project, which can be upgraded as the town grows, and once completed you get an ambassador. Ambassadors are assigned to ride on the giants, granting them new capabilities, but which ability they get is dependent on the type of town (forest, swamp, desert) the new companion comes from. Weighing new abilities against the potential for its need can be pretty tricky, especially when you’ve got multiple cities with different needs scattered around the planet.

Once you’re finally happy with the type of resource, the last thing to take into account to maximize it’s output is its synthesis ability. This is a bonus to its output that can effect either the specific resource or the surrounding area, depending. A mine might be more useful by having an animal nest next to it, or deer get an Awe bonus (think of it as divine reverence that helps keep the populace in line) when near a patch of plants for grazing. Developing resources and exploiting them to their fullest takes some planning, but the reward is a thriving town that, hopefully, won’t get too impressed with itself. Give the people too much stuff too quickly and they start thinking they deserve it, because people are jerks that way.

If all this sounds like a lot, that’s because it can be a bit overwhelming at first. Figuring out the requirements for an apple tree, or remembering which giant can bestow the Herd aspect to change bunnies into deer, and that a copper mine wants to be put on a mountain and beside an animal nest with the village having a certain wealth level before its bonuses kick in takes a little effort. The reward for this is a strategy/puzzle game that sees gods striding the earth bestowing miracles, or sometimes beating a civilization into a fine paste when they get out of hand. It takes planning born of experience to wring the most from the land, but soon you can start planning and adapting to the needs of your settlements. It’s all about making the most of the situation.

Reus looks like a game, but it’s actually a machine of interlocking systems, and the fun comes from figuring out which levers to pull. You can practically see the gears turn as one feature interlocks with another. People can be demanding, space is limited, and high prosperity difficult to attain, but you’re a quartet of giant gods who can always decide to rain toxic sludge on the world if it gets too annoying, so that takes the edge off things quite nicely. Reus is a game of giants walking the earth, and an epic contraption whose pleasantly rewarding output wrests a world teeming with life from a dead planet’s skin.