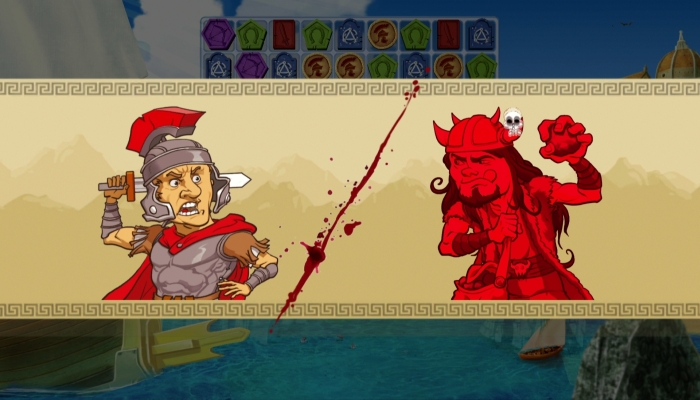 Tiny Token Empires is a tale of two games — a perfectly fine match 3 puzzle game with some variety, and an incredibly frustrating strategy game. The PS3 version we’re covering is a port of a PC game, and it definitely plays like a game meant for PC that has been poorly transferred to a different control setup. In theory, the idea of a puzzler mixed with another genre can work — like the RPG/puzzle hybrid Puzzle Quest. There, you had a game that mixed the trappings of one genre with a puzzle game and it was quite good and user-friendly even if you weren’t a fan of RPGs, but enjoyed puzzle games. Tiny Token Empires is largely a strategy game with a puzzle game in there for good measure as well.

Most of your time in the game will be spent on the strategy portion, which has the most depth, but is also the game’s weakest point due to the control setup. First, let’s go over the mechanics of everything since they’re fairly logical and in theory, shouldn’t be too hard to execute. You go from area to area hiring an army using winnings from the puzzle section to hire new troops of either a particular kind you already have, or a new kind of troop. During an invasion of a new area, you’ll either take part in a battle mode with a traditional match 3 setup, or when going to an empty area for loot, go into a different kind of match 3 with spinning pieces and locks to add to the strategy.

We’ll get to those later since they’re actually quite good and deserve their own section instead of being lumped in with the many problems with the strategy portion of things. The controls are laid on well enough in theory, with X confirming, O going back, and square and select allowing you to alter troop or town settings with sub-menus. The problem is that they’re unresponsive and everything seems to take longer than it should. Being a strategy game, you naturally expect a somewhat slow pace, but here, things are nearly at a glacial pace. This issue is made worse when you’re doing exactly what it tells you to do, but nothing is registering due to input lag.

There are times when you’ll be on the overworld map and just be given the option to press X or triangle to do something – you can press each button until your face is as blue as the X button and it won’t matter. Nothing you do will register…unless you save, exit the game, and come back. Saving is another issue as it takes ages for the save menu to come up, then far more time for the save slot selection area to come up. Far too many parts of the interface are aggravating and it takes what could be a fun game, and probably would be if things worked as they should, and makes it frustrating.

Reviews for the PC and IOS versions seem reasonable and don’t mention these issues at all, so it would appear that these are new problems for the console version. In a strange move for a menu-driven game, the d-pad isn’t supported. This makes some sense for the strategy portion since you’ll want more accurate controls for diagonal movement, but doesn’t make any for traditional menus or the puzzle game sections. While there’s a lot I don’t like about the strategy portions, I do like that you can choose between either a strict mission structure in the basic campaign or a more open “free campaign.

The former tends to result in a ton of pop-ups telling you what you’re doing is wrong and giving vague hints as to how to remedy it, while the latter is far more open-ended and still puts you on a set path to some extent. It gives you loose goals, lets you pick some goals for yourself, and offers up more variety. The pace is also quite a bit faster in the free mode, with less downtime and frustration since the strategy portion is minimized in favor of a focus on the puzzle stuff.

Those aspects are far more polished, responsive, and most importantly, fun, than the strategy portion of TTE.  The traditional match 3 game has a battle component mixed in where successful matches build up a blue attack meter and each attack wears down the red health bar. Combos play a huge part in this game and there’s nothing more thrilling in it than getting on a hot streak, having a few combos roll into each other, THEN getting an extra turn and being able to dole out a nice amount of damage if not kill at least one enemy soldier before they’ve had a chance to do any damage to you. The match 3 puzzler is a blast outside of being unable to use the d-pad, and the rather odd choice of not allowing you to hold a button or just press in a direction to indicate which piece you’d like to move. Instead, you need to select a piece, hit X, then move in a direction towards the next one and hit X again to indicate you’d like to swap those two pieces. The devs somehow found a way to needlessly complicate things in a simple puzzle game, and that’s easily the least fun part of this mode since it forces games to last longer than they should.

The twirl-pieces puzzle mode is a lot of fun and doesn’t use enemies at all. Here, your goal is to get as many matches as possible while getting as few locks in your collection as possible. Eight locks is the absolute maximum, and while you can still win with that many, it’s harder. Here, as in Bejeweled Blitz, you have to spin sets of four pieces around to make matches. You really need to think about your placement with the locks in play because a few wrong turns can cause a lot of them to pile up quickly.

There isn’t much to talk about on the AV side of things. The puzzle mode graphics are solid, but aren’t anywhere near as impressive as even the Bejeweled games or something newer like Germinator. The strategy portions feature fine-looking map areas, but the character models look dreadful. They all have a ton of jaggies around them, and those looked awful a decade ago on standard def displays and stick out far worse now on HDTVs. The music is also nothing special, and is just a few Roman gladiator-sounding songs, with some shield smashes and the like for battles. Nothing about the audio stands out and you’re not missing out on much by muting the game.

All in all, it’s hard to recommend Tiny Token Empires for the PS3. Even though the puzzle portions are a lot of fun, they’re not so much better than other games on the market that the frustrations caused by the strategy portion are worth putting up with them for. There’s a free demo available, so give that a shot before buying it. If you do that and love it, then get the PC version for $3 from Big Fish Games — it likely controls a lot better, and costs far less than the PSN version.