Coming out in the wake of the Game Boy Color and only two years before the Game Boy Advance, it’s no secret why the Neo Geo Pocket Color enjoyed limited success in America. While largely ignored on its original release, gamers have since picked up the handheld console and begun to experience the unique features it has to offer — and for good reason. Much like its arcade/home brothers, Neo Geo Pocket Color games have aged incredibly well for a fourteen-year-old handheld system. As the majority of its library can be picked up loose for under ten bucks on eBay, Pocket Power is devoted to guiding new and old NGPC collectors alike before prices rise and availability lowers thanks to nostalgia-hungry collectors

Looking at Neo Geo Cup ’98 Plus Color does nothing to inspire its acquisition. Beginning with the confusingly long title that seems to keep tacking on subtitles in an increasingly attention-losing way, its name is completely arbitrary and unnecessary in the first place. The game was released in late 1999, yet carries the “’98” moniker — which would be like releasing Madden 2012 in late 2013 — and uses the name of a one-off Neo Geo game to start a franchise on the handheld. Its forerunner, Neo Geo Cup ’98: The Road to Victory is itself a remake of Super Sidekicks 3 that slapped FIFA assets on a perfectly good soccer game. The fact that this version drops the FIFA affiliation and that Super Sidekicks is a much more recognizable and appealing brand name makes it a complete mystery why this wasn’t simply dubbed “Super Sidekicks Pocket”. Rounding out the marketing woes is the hideous cover art that features a blurry picture of four out of proportion soccer players doing god knows what. The entire game features a cute, anime art-style (including the back of the case and manual) that’s totally lost in marketing. But, a sports game with no aesthetic appeal whatsoever should ensure a realistic game of soccer. …Right? 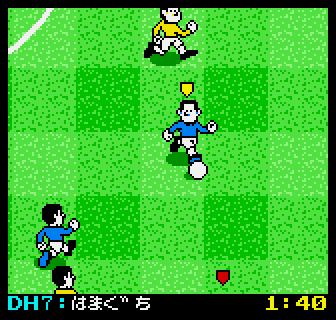 Unfortunately, Neo Geo Cup ’98 Plus Color tries to deliver a soccer simulation game on a console with two buttons and the results are confusing at best and unplayable at worst. The NGPC screen is quite condensed and has never been conducive for titles that require a large viewing area, but a field-based game like soccer just doesn’t work on it. Instead of seeing the entire field of play (or the majority of it), you’re relegated to a tiny sliver of the screen with usually no more than two players of your roster on screen at a time. This makes it near impossible to set-up plays, as you have no idea if there’s anyone to pass to or which opposing players could be blocking any which direction. As you typically have to pass blind, it forces you to take your thumb off the joystick after a pass so the nearest NPC correctly runs towards the ball. Goal-scoring is perhaps hit hardest by this lack of view, as you’ll have to get in the goalie’s face to be able to see where to shoot — ensuring that he’ll simply rush you and steal the ball the majority of the time.

The shame about this crippling issue is that basic gameplay is actually not bad. A passes and B shoots when you’re handling the ball, while A is a charge (to steal the ball) and B is a slide to knock down your opponent when the opposing team has the ball. Holding down either button longer offensively results in a longer pass/shot, which helps make due with the lack of buttons. While there’s other moves that can be done based on moving the joystick, they’re near impossible to execute purposely, leading to a easy-to-master (if not purposely) game of soccer. Perhaps because of this, however, the enemy AI is ramped up to a ridiculous level. No matter how you play, you constantly feel handicapped with the opposing team outrunning you and having the unfair advantage of inherently knowing where their teammates are. Playing the game the past few weeks, I put in several hours and didn’t win a game in that time. Now, before you go off thinking I simply stink at soccer, know that I’ve learned most the tricks in this game and rarely have opponents score on me. It’s just incredibly difficult to score a goal. I’ve had at least twenty scoreless draws and in all my hours with the game, scored just three goals. And while perhaps there’s some soccer master out there that scoffs at this progress, the majority of gamers will have similar results to mine. A soccer game where you score three goals in thirty games is hardly a game at all. 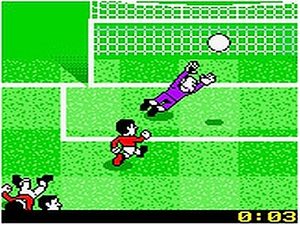 The tragedy here is that there’s a great and deep game buried in all the poor design choices and inherent flaws of its console that will never be fully appreciated due to the annoyances of gameplay. Besides Single, which allows you to choose a team and opponent in a simple exhibition match, there’s a surprisingly deep Story mode. In this mode, you choose from one of sixteen teams to manage on their way to win the Neo Geo Cup. Rosters can be customized and playing a match awards you with money you can spend in the Shop to unlock items to equip on players. Every so often, a mysterious trader, scientist or thief might appear after a game, which adds some spice. If the gameplay itself were more enjoyable, this is the kind of mode where you could easily sink a hundred hours in over the course of a few years, constantly trying to win games and make your team as powerful as possible. But after you get tired of your fiftieth draw, it’s likely you’ll give up on this mode and the game altogether.

While most games are bad simply because they’re thrown together with little care for the end result, it’s clear that a lot of time and effort was taken in designing Neo Geo Cup ’98 Plus Color. Evidenced by its manual, which clocks in at a whopping fifty-five pages, there’s a lot more here than a simple game of soccer. If just a few flaws were corrected, including decreasing the difficulty and zooming out on the field, this could have been one of the most addicting handheld soccer games around (and not just of its era). Unfortunately, the short lifespan of its console made it so a sequel never had a chance to surface — or another soccer game whatsoever. As such, fans of the genre *might* want to give it a try to see if they can squeeze any enjoyment out of it, if only for novelty, but it’s likely that the end result will be frustration. Maybe the cover art was a good choice after all — poor design choices ruining something that could be so easily appealing.