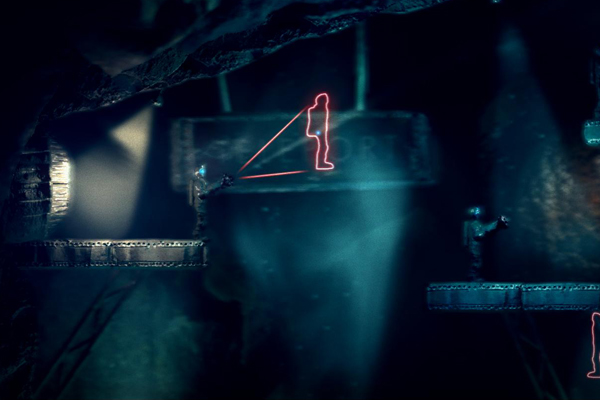 Ridley Scott has a lot to answer for. There’s not a space station, ship, or colony that’s ever going to have a hope in hell of survival thanks to Alien, but at least they keep getting decimated in new and interesting ways. This crew, for example, was accidentally decimated as a side effect of collecting sentient rocks. Being eviscerated by terrible things in the dark is old hat; it’s far better to use the research made possible by psychic boulders to create a soul/consciousness swapping clone gun and explore its aftermath.

The Swapper is a game that can best be though of, in lazy This plus That equals Game shorthand, as equal parts Portal and Metroid. You’re a lonely astronaut in the ruins of a giant space station, chasing after the few survivors to find out what happened and maybe find a way out of this mess. The one resource at the astronaut’s disposal is the swapper gun, which is a dual-purpose device that can both create a clone and transfer consciousness into it. New sections of the ship are blocked off by doors that need a set number of orbs to open, and solving single-room puzzles using all the gun’s quirks is the only way to progress.

The spaceship is dark and moody, lit by ambient sources or the astronaut’s flashlight. The 2D art style is lovely as well, feeling like stop-motion animation due to being constructed from clay models and other heavily processed real-world textures. The real star of the show, however, is the swapper gun. The gun creates a clone of the astronaut that will mirror your moves perfectly. Walk left or right, jump, use the mouse to aim, and the meat-puppet clone does exactly the same thing. There’s a question in the game’s narrative as to whether or not these clones are something else, and if moving perspective from one to another is an actual transfer of “you”, but the mindlessness of their movements as they perfectly copy whichever one is being controlled puts those doubts to rest fairly quickly. It’s pretty disturbing the first time you forget you’ve left a clone high above, only to have it come crashing down and ragdoll-splat to the floor, but by game’s end you’ll have inhabited and discarded endless dozens of flesh-husks.

Earning the orbs to progress requires the slaughter of countless clones. The gun has a limit of five clones walking around at a time, and sometimes it’s necessary to dispose of one to put another elsewhere. Two things happen while targeting where to place a clone- time slows down almost to a stop, and a red astronaut outline appears around where you’ll be placing your doppleganger. The swapper gun has a good range, and every clone comes out with zero vertical inertia but perfectly copying any horizontal movement. This can lead to some interesting air tricks, such as climbing up a shaft by creating a clone, jumping immediately into its body, then pointing straight up and repeating. Sure, the discarded copy will bounce off the ground with a worrying thud, but it’s not you any more so that’s ok, as long as you don’t think about it too closely. Oddly enough, if you touch a clone with the body holding consciousness, it falls to pieces on the spot. The life expectancy of the average meat husk is generally measured in seconds.

The clones are there to use and discard, however, and the puzzle rooms chew through them mercilessly. It starts off easy enough, but each room adds another layer of technique to your mental arsenal. First it’s figuring out how to place a clone so it’s on a button to open the door so you can place another clone on the orb, then transfer consciousness to it so the orb can be collected. Just walking over to the orb would have moved the clone off the button, after all. Then colored lights are introduced, with clones unable to be created in blue light, mind-transfer not being able to travel through red light, and purple eradicating both abilities. The last wrinkle is gravity, with the final puzzles requiring careful manipulation of multiple clones across switches on both ceiling and floor controlling the colored lights that bar the creation of a clone in the necessary spot to collect the orb, and even if you manage to activate the switches the obvious solution doesn’t work because it needs six astronauts and the gun tops out at five. The Swapper‘s puzzles aren’t actually made of pure evil, but it can feel like it at times.

The deviousness of the puzzles is the heart of The Swapper. Every room requires a slightly different approach, so by the game’s end you’ve got a giant arsenal of techniques to try out, none of which were ever explained by anything other than the experience of progression. The rooms aren’t timed, there’s no clock to race, and if you screw up it’s the work of a minute to re-try a potential solution with a slightly different approach. The Swapper is a game that requires heavy thinking, and the reward for success is the chance to apply the results to the next puzzle. The price in orbs to remove an obstacle is generally pretty cheap, with only the final blockade needing every room in the game solved. Stop, think, consider, come back later if you need to. The Swapper is in no hurry, and is more than willing to let you sit and stare while thinking “That’s impossible!” until all of a sudden it isn’t impossible any more.

The Swapper is a wonderfully clever game that’s as smart as it is atmospheric. The swapper gun is a simple device that allows some fantastically tricky puzzle solving, and the pace of the difficulty increase is perfectly balanced so you’re never looking at a room as a giant pile of work rather than a fascinating task. The dark reaches of space are a horrible, deadly place, but if they’re filled with excellent gaming like The Swapper, it’s probably worth the trip.