Puzzle games are in abundance this year. Tiny Brains is a new release developed by Spearhead Games, it follows the trials and challenges every scientific experimental rodent must face. You choose between four little critters and get to use unique abilities to successfully find your way out of a mad scientist’s menacing series of levels. Each area presents a task which must be completed in order to move on to the next.

For example, you must roll a ball up a steep slope to activate a switch but you cannot lose it. One creature can create a short wall which comes in handy to block the ball from rolling back down. Another animal can push objects across the stage. Tiny Brains is best played with three other people. Hopefully putting everyone’s heads together will make it easier because that’s the idea. You’re all working together to complete all the levels. There are other missions in the game like having to protect a pink chicken from other chickens. You can go at it by yourself. If you do, you’ll be able to switch between all four tiny guys and use their abilities when necessary. Once you reach the end of each level a tiny party is thrown. Look at banner, everyone. 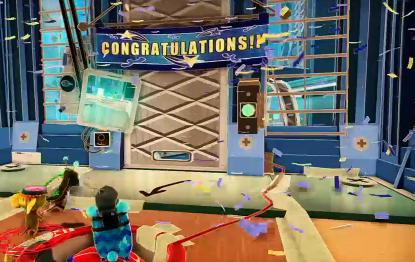 The game will be available on Pc, PS3 and PS4. At the convention it was demonstrated using the PlayStation 4. But because the product is still in development, some of the screens would skip and lag. Don’t worry though, the big brains at Spearhead and Sony will squash any bugs.