Are you capable of playing a game without suffering an identity crisis? That’s probably a question you should ask yourself before you decide that you want to give Marvel Heroes a whirl. Announced a while back, Marvel Heroes seemed like an intriguing prospect when it was first pitched. Unlike the other mega superhero MMO that’s out their Marvel Heroes was opting to let you actually play as iconic characters from its lexicon, rather than just alongside them. A fascinating prospect for sure, but just how that all translates to an actual game was something that remained to be seen until release.

Release is now, and Marvel Heroes‘ content has been mostly conquered, and you need to be able to decide if this game is worth the investment of time, and in some cases money. To even bring up the subject of money might already be a point of contention for some as Marvel Heroes has billed itself as a premier free to play game that can be completed without ever having to spend extra money. While that statement is mostly true, there are definitely things that can be made much easier with a little cash lubrication to spin the gears. We’ll touch on that later, but for now let’s focus on the aspects of gameplay that define Marvel Heroes. The closest thing that you could probably draw a comparison to would be Marvel’s Ultimate Alliance. Much like those games, this game is played as an ARPG from a top down perspective. You are given the ability to select from a limited roster of characters, and then you are set loose in the world of Marvel to correct the wrongs wrought by the hand of Dr. Doom. 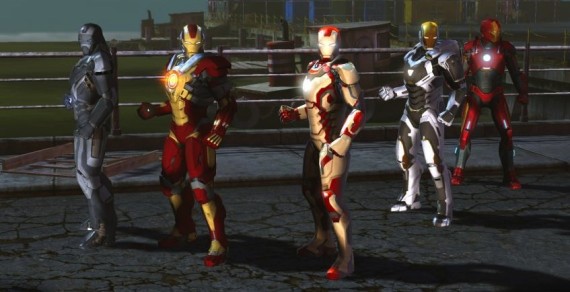 It’s probably a this point that most players will notice the distinct lack of character options in Marvel Heroes. The default pick of characters that the game gives you is pretty small and is made of mostly ancillary characters. While no one is going to dispute that The Thing, and Daredevil are cool dudes, they aren’t exactly at the top of anyone’s list when drafting a fantasy superhero dream team. The other side effect of having such a limited roster for starting players is that you will inevitably see 15 Daredevils running around, all being Daredevil. Granted there are costumes that you can later purchase to help differentiate yourself from your fellow hero compatriots, it can still be a little disorienting to lose yourself in an endless sea of yourself. Marvel Heroes also doesn’t really give itself much room to deal with this in terms of instancing, or team grouping as the social options are pretty limited, so this ends up sticking out before long.

Strangely enough this looks like less and less like a glaring issues when put into context with other ARPG games that follow the same design style. When you play Marvel Heroes you slowly start to realize that the game plays like a strange hybrid of a Diablo styled game, with some splashes of modern MOBA games thrown in. Each hero plays like their own class, much like the role of Champions, or Gods in MOBA games. So while you might have a character like The Thing, and a Hulk character, each of these heroes will play differently. It’s not like you’re going to just have two giant wrecking ball like creatures with the same exact power set. So play strategies do start to develop organically depending on which character you decide to roll/role with, but there’s a problem with that. These strategies, and alternate paths to playing don’t really open up until much later in the game when the scope of your characters power set becomes apparent. To put this in another way, you might end up finding out you’ve been playing a character wrong, if only because you unlock a power that shares a synergy bonus with a power you didn’t even bother to put points into before.

Fortunately, the game lets you get through your own boneheadedness when you pull Mc. Stupid, and roll all your stats wrong. You can just pop on into the cash store and buy yourself a Retcon Device, which naturally lets you reroll all your stat points as you see fit. Notice though that the Retcon Device is locked away behind a cash entry price? Yeah, that’s just how Marvel Heroes rolls, and if you don’t like it then you can just quest like crazy. So here’s where the loop starts to begin for most players that don’t want to dump absurd amounts of cash into the game. You’ve got your starting set of characters to pick from, and you only get to pick one. When you load into a server you will quickly realize that every single other person in the game has picked that same exact character. Never fear as you can grab another character in the store, right? Yeah totally, if you want to spend around $10-$20 for a character; which you would think would be a steep enough price tag to mean that other people aren’t going to be running around as Jean Grey too. Again, this is an MMO, and there are literally thousands of people playing at launch, so that idea is laughable at the outset.

Instead what you are going to find is that the idea of spending more and more money just in some pointless attempt to stand out in a game is a fool’s pursuit, and you might as well just get yourself a roster of a few heroes you like and deal with it. Here’s where that hefty price tag becomes a factor, and also has a pretty novel solution. You can spend all that money, or you can just slog it out and defeat bosses for the chance of getting unlock tokens as loot drops. Unlock tokens act as an immediate means of unlocking a new character without having to spend any money in the store to do so, and the rarity of the drops, and the frequency seems highly dependent on the level of the boss you defeat. So while you might beat a boss early on, and get rewarded with Scarlet Witch, you may beat a high level boss later, and get rewarded with an Iron Man token.

These things are all little building blocks of the game the Marvel Heroes slowly reveals itself to be. The Diablo loot drops, and color coded scale are all there, as is the crafting and skill trees that you’ve come to expect from these games. Still Marvel Heroes isn’t about that. Marvel Heroes is about the endless pursuit of identity in a nonstop cloning facility. Make no mistake you will never be able to stand out enough to be the one Wolverine that everyone remembers. You might be able to get your skillset to the point where everyone is in awe of your mastery of Wolverine, or you may have mastered crafting to the point where every single item in your equip slots is enchanted to the point of making Dr. Strange jealous. Yes the game allows these things. It allows you to play with all the tropes and traps of a surprisingly well tuned ARPG game. Which is why it’s so strange to now be able to find flaw in that as a design ethos.

This is the strange double edged litany of Marvel Heroes. It is a game that in any other situation might actually be praised for its depth of class selection. As another entry into the genre of ARPG games it succeeds in building multiple classes that are legitimately varied and interesting to play with. So it’s sad that the game suffers from its own design by giving everyone else the option to be you, and possibly be better at being you than you can be. Somewhere along the line someone forgot that the reason most online gamers play online games is to craft a sense of identity and achievement. Marvel Heroes may still have the potential to do that with creative grouping, and social options, but for now, there isn’t a definable way to make this game your own. Worse still is that the game becomes a trap of identity as your sole motivation to play through the content over and over will be for the chance of token drops. This would be fine if the endgame content was terrific, but it’s just another take on end boss runs that ends up feeling same-ish before it’s over. This was evidence by someone saying into general chat “I wish we had a healer right now because I’m all DPS” Statements like that make me feel like I’m playing WoW, and…. ugh.

Marvel Heroes is a good game that would probably get more praise if it worked out some of its most fundamental issues out the gate. Lean character selection in a game as huge as this is to be expected this early in its life, but it isn’t something that had to be such a standout issue either. Gazillion still has the opportunity to get creative with player shuffling, or giving players more options and control to build the perfect team. While the questing ends up feeling repetitive toward the end, it may just be symptomatic of the genre overall. Otherwise, this game has done a decent job of avoiding genre fatigue if viewed through the right set of eyes, absent of rose tint, also bearing in mind that there’s a decent amount of time to be invested before you’ll really come to understand the game. That’s a very long winded way of saying: yeah, the game’s alright.