The 90s FPS is a different kind of animal compared to today’s offerings, being more about arcade shooting and killing you dead than walking through a story.  Tower of Guns holds to this model while layering in some of the rogue-like randomization that’s been so popular lately, and the result was an E3 demo that earned its Best Indie Game nomination.

Tower of Guns is an FPS filled with crafted randomization.  What this means is that game elements like rooms are pre-built, but there’s a lot of them to choose from and they come in a random order that only sees a small handful used each playthrough.  The enemy placement gets the same treatment, with the rooms having many variations of enemy layouts that can appear, but mix of enemies is selected from pre-built patterns.  The game won’t just plop down a turret on any spot because that would look ridiculous.  Instead there are areas in the level where enemies may (or may not) appear, and you never know what’s going to pop up until it starts shooting at you. 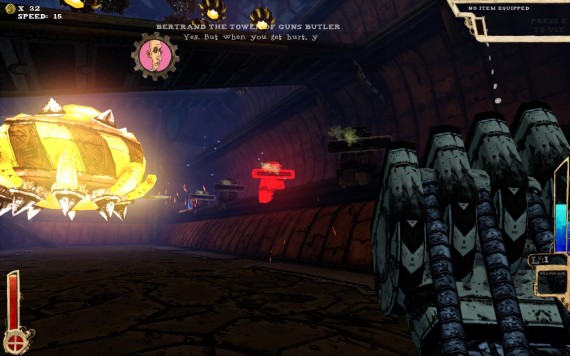 The other rogue-like-lite aspect of the randomization is in the power-ups.  They stack, and they don’t stop stacking for anything.  Got a double jump?  Find a couple more and get a quadruple-jump.  Speed, gun effects, and many more will be integrated as development continues, making each game different from the last.  There’s a lot of replayability due to the random nature of everything, and the plan for the game’s structure is to be a lunch-break experience.  From start to finish a single play-through will last an hour, assuming you can actually make it through instead of dying over and over again.

Since E3 I’ve broken down and bought the beta.  (He offered a press copy, I figured he’d earned the $5 early-alpha entry fee.)  Several hours of hands-on time at the comfort of my own PC has shown a game that’s loaded with replayability even in this early state.  Picking a weapon at the game’s start and a perk to go with it alter the way a playthrough is approached, and while it’s easy to settle on a favorite combination the nature of the game encourages experimentation.  There’s room geometry to tweak, bugs to squash, and it could use a few more enemy types, but the core game just feels good.   Tower of Guns looked like one of the good ones at E3, and a weekend’s worth of compulsive pre-alpha play has thoroughly backed this impression up.  There’s already a lot of pleasantly crazed shooting action in Tower of Guns, and there should be plenty more on the way in the upcoming months. 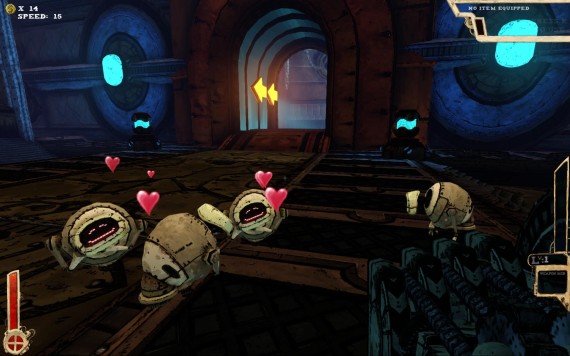