It speaks to the state of this industry’s stagnation when a game that’s 17 years old is more complete and engaging than most new releases. But that’s what Capcom’s re-release of this arcade brawler is: a piece of nostalgia that has been finely preserved to the point that tearing into it once again feels refreshing and exciting.

Dungeons & Dragons: Chronicles of Mystara is actually two games in one — Dungeons & Dragons: Shadow Over Mystara and Dungeons & Dragons: Tower of Doom. Regardless of which is being played, though, each is a classic side-scrolling beat’em up in the vein of well-known gems such as Double Dragon and Streets of Rage. As such, both go down in the same way, which essentially equates to trouncing an exorbitant amount of baddies with all sorts of melee attacks and weaponry. The one defining quality of these titles doesn’t exist in the fundamental mechanics, however, but rather how the games approach the genre as a whole, and how Capcom masterfully weaves elements of their competitive fighting titles into this pair of cooperatively-emphasized brawlers. 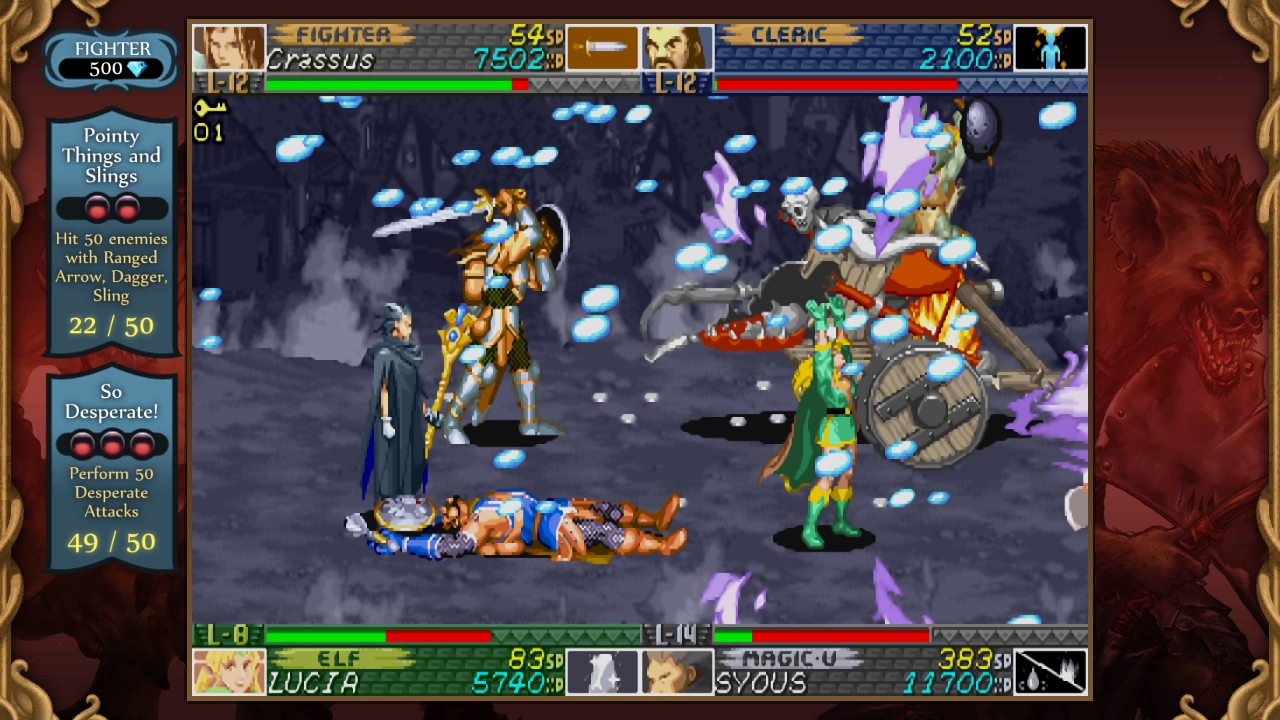 So what that means for Chronicles is that it’s a compilation of games that makes better use of skill and timing than most other titles of its kind. The games employ a combat system that is similar to something like Street Fighter, forcing players to input intricate button combinations and joystick rolls to pull off crushing attacks. The entirety of the experience doesn’t hinge upon these fighting game-based maneuvers, which is nice as button mashing and single attacks can get folks through the game just fine, but the mere incorporation of these higher tired, skill-dependent variations makes for a rather deep experience. Nevertheless, what this ultimately means is that Chronicles of Mystara is a game for casual and hardcore fans; a kind of title that can be enjoyed by two people of two totally different skill levels and gameplay approaches.

Accessibility is one of Chronicles’ most prized accomplishments. While there is the aforesaid depth in pulling off certain moves, the game is generally pick-up-and-play and immediately enjoyable. Players will quickly acclimate to the games’ combat options, noticing that there are some essential abilities available to all players. Folks can block, slide, perform basic melee attacks, dash and even shoryuken, on top of being able to unleash class-specific special powers. Clerics can heal, elves can let loose screen-clearing magic spells and thieves can steal valuables from enemies. There are also items to pick up and buy between missions. These can then be utilized mid-game to mix up the action even further. When put together what players are left with is a slick, refined bundle of games that utilize a number of possible options with which folks can vanquish their foes. Moreover, divvying out the pain is done so through responsive controls and a control setup that is instantly recognizable and easy to adapt to — key factors in a beat’em up game. 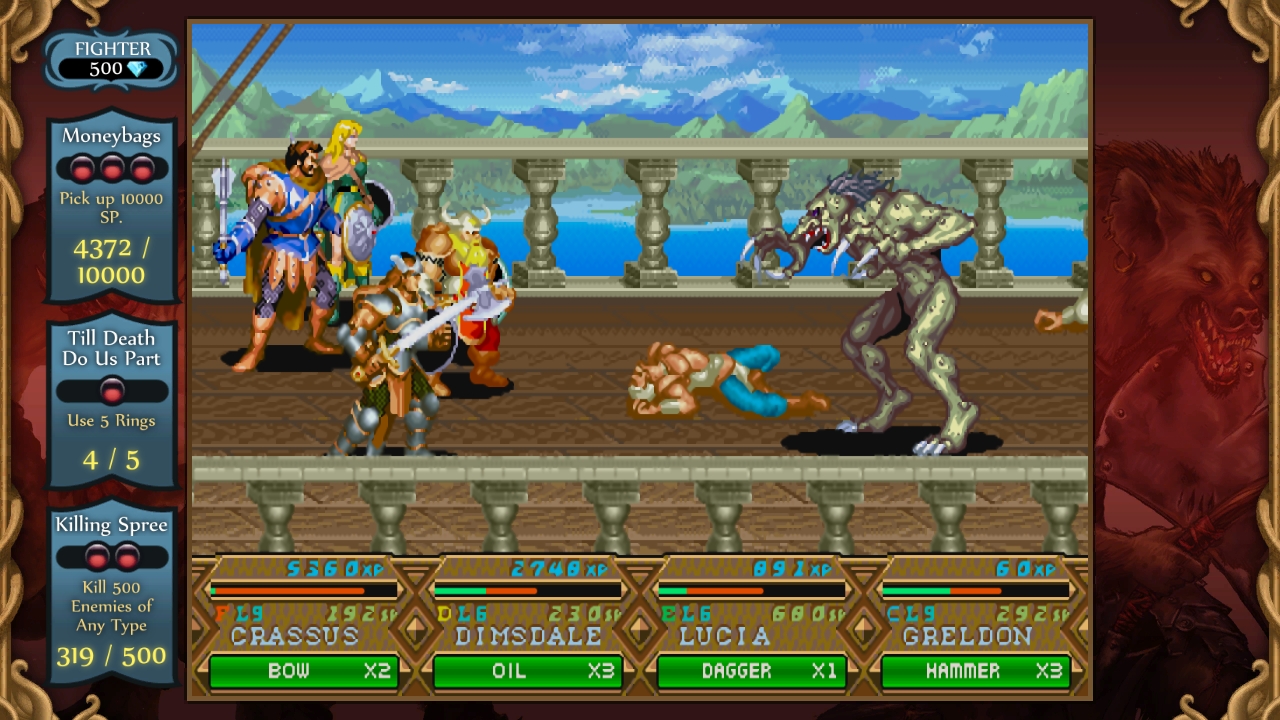 To make things all the more alluring and astoundingly holistic, Capcom includes six character classes from which to choose. The core D&D archetypes are represented here, and better yet, each plays significantly different from the other. The classes have their own skills and overall play styles, making for an adventure that feels distinct depending on the character being played. To have these types of options in a brawler feels well-conceived and rewardingly thorough. Thus, to say that Chronicles paved the way for some of the most notorious brawlers released in recent years would be an understatement.

But no matter which type of character players choose, they should expect to devote solid four to five hours to make it through both games’ campaigns. While this may not blow up some younger gamers’ skirts, who are accustomed to lengthier adventures, there are several branching paths throughout the excursion, as well as secrets and hidden goodies to unearth. This encourages multiple playthroughs, which is what Chronicles is all about.

These playthroughs will be more appealing, though, with friends in tow. Fortunately, Dungeons & Dragons: Chronicles of Mystara has it covered when it comes to integrating a sound multiplayer extravaganza. The game allows for up to four players to hack their way to high-fantasy glory either locally or online. By having friends tag along, it naturally makes the campaign all the more thrilling, and we had quite a few laughs during our play sessions — the type of interactions only possible in a game that is relatively low-stress such as this. 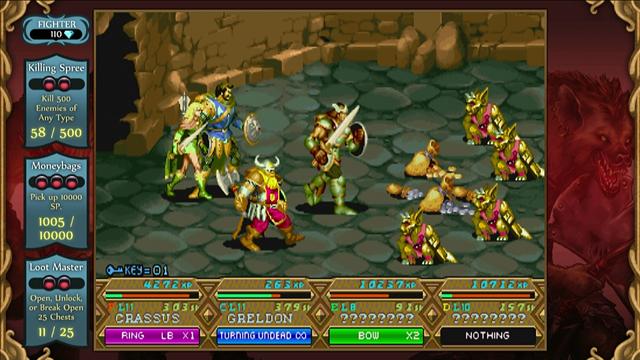 So aside from the generally spectacular gameplay and wild, fist-pumpingly good co-op, we come to the game’s presentation. Consdering the titles’ ages, one may assume that these puppies aren’t easy on the eyes. But, assuming such a thing would be unceremoniously wrong because these games still look magical. Colors pop, the interface is clean and to the point and special attacks look wondrous in all their 2D sprite splendor. Sure, these are 2D games from a bygone era, and that being so means they may look a bit too retro for gamers who grew up on later generations of consoles. But, if folks have an appreciation for finely crafted sprite work, it doesn’t get much better than Chronicles of Mystara. The complementary soundtrack is also a delight, but again noticeably old-school. In light of that, the tunes available serve their purpose, making sure to intensify white-knuckled boss battles and sooth players’ hearts between missions while they peruse items from the merchant’s shop.

If Chronicles has an apparent downfall, though, it’s that it’s short and lacks the overall depth of other brawlers like Guardian Heroes and Code of Princess. There isn’t an extensive leveling system to be found, and players won’t be able to string together nigh endless combos like those two titles specifically. This could mean that players will need to adjust their expectations so that they are well prepared for a somewhat tame, watered-down version of some of the genre’s best. The 3:4 aspect ratio also feels like a bit of a missed opportunity, though purists will probably dig it. With the level of care put into this package, one would assume Capcom would do something about this issue; but the truth is, it’s not a deal breaker, just a minor annoyance that’s come to be expected with the release of these older titles. 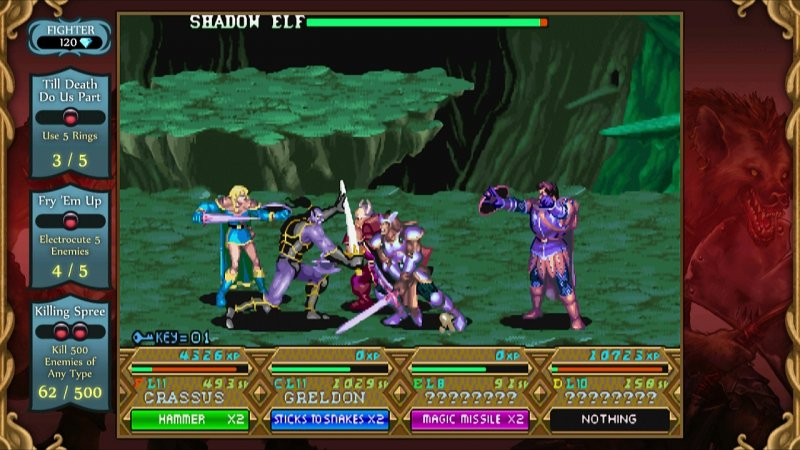 At the end of the day, Dungeons & Dragons: Chronicles of Mystara packs together two splendid side-scrolling brawlers that have withstood the test of time. This is indicative of how well-designed and crafted they are, as they provide some of the most entertaining beat’em up action around, even when put up against more modern rivals. They may have some shortcomings and be rather short, but the five hours that will be spent taking in the sights and sounds of all things D&D will be amongst the most enjoyable you’ll have gaming all year. Some of the best downloadable titles of 2013, these games are a token of appreciation to a time in gaming when just beating up on some bad guys could be fun. Not plunking down the $15 would simply be daft — and you don’t want to be daft, right?